Trooper Clerks is an American animated parody film produced by Studio Creations that depicts Dante Hicks and Randall Graves, the titular convenience store clerks from writer/director Kevin Smith's Clerks films, as Stormtroopers in the Star Wars media franchise, in a satire of both properties.

The film was nominated for the 2003 Official Star Wars Fan Film Awards, and won the Animation category. [1]

According to the official web site, "Trooper Clerks is a parody mixing the characters from Kevin Smith's Clerks universe with the settings and characters in George Lucas's Star Wars universe." [2] 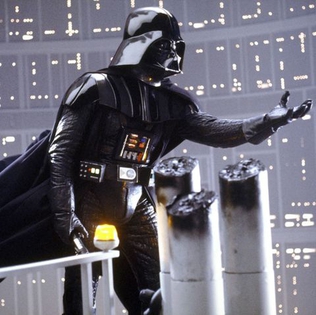 Darth Vader is a fictional character in the Star Wars franchise. The character is the primary antagonist in the original trilogy and, as Anakin Skywalker, is one of the primary protagonists throughout the prequel trilogy. Star Wars creator George Lucas has collectively referred to the first six episodic films of the franchise as "the tragedy of Darth Vader". He has become one of the most iconic villains in popular culture, and has been listed among the greatest villains and fictional characters ever. 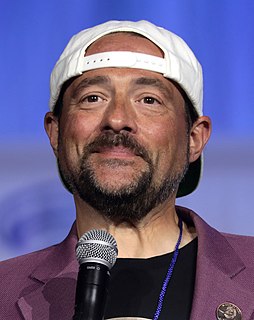 Kevin Patrick Smith is an American filmmaker, actor, comedian, comic book writer, author, YouTuber, and podcaster. He came to prominence with the low-budget comedy buddy film Clerks (1994), which he wrote, directed, co-produced, and acted in as the character Silent Bob of stoner duo Jay and Silent Bob. Jay and Silent Bob also appeared in Smith's later films Mallrats, Chasing Amy, Dogma, Jay and Silent Bob Strike Back, Clerks II and Jay and Silent Bob Reboot, which are set primarily in his home state of New Jersey. While not strictly sequential, the films have crossover plot elements, character references, and a shared canon known as the "View Askewniverse", named after Smith's production company View Askew Productions, which he co-founded with Scott Mosier. 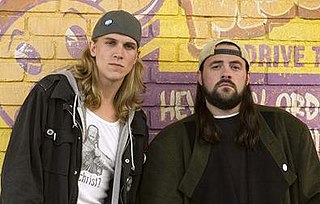 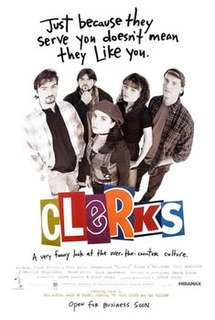 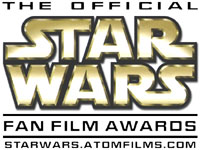 The Official Star Wars Fan Film Awards was an annual contest put forth by Lucasfilm and AtomFilms to showcase and acknowledge the growing genre of fan films made by, for, and about fans of the Star Wars saga. The inaugural contest in 2002 was the first time Lucasfilm had officially sanctioned the genre. In 2007, the contest was renamed the Star Wars Fan Movie Challenge. In 2012, Lucasfilm announced that the contest was being discontinued, and that the company was looking for "new ways for fans to share their creativity".

Clerks II is a 2006 American comedy film written and directed by Kevin Smith, the sequel to his 1994 film Clerks, and his sixth feature film to be set in the View Askewniverse. The film stars Brian O'Halloran, Jeff Anderson, Rosario Dawson, Trevor Fehrman, Jennifer Schwalbach Smith, Jason Mewes, and Smith, and picks up with the original characters from Clerks: Dante Hicks, Randal Graves and Jay and Silent Bob ten years after the events of the first film. Unlike the first film, which was shot in black-and-white, this film was shot in color. 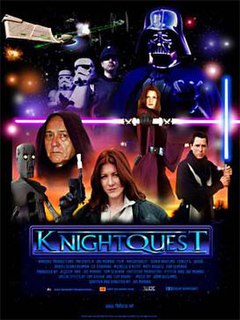 Knightquest is a fan film that made its debut on the internet in October 2001, created by fans of the Star Wars franchise. It is a live-action drama set in the Star Wars universe, taking place a few weeks before the events in A New Hope. It depicts Darth Vader's ongoing quest to seek out and destroy any Jedi who may have escaped the great purge years ago.

The View Askewniverse is a fictional universe created by writer/director Kevin Smith, featured in several films, comics and a television series; it is named for Smith's production company, View Askew Productions. The characters Jay and Silent Bob appear in almost all the View Askewniverse media, and characters from one story often reappear or are referred to in others. Smith often casts the same actors for multiple characters in the universe, sometimes even in the same film; Smith himself portrays the character of Silent Bob. 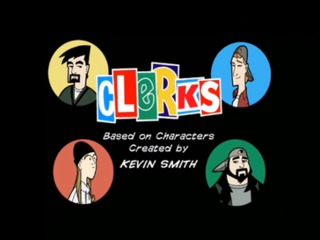 Clerks is an American adult animated sitcom that was first broadcast on ABC in 2000. Based on Kevin Smith's 1994 comedy film of the same name, it was developed for television by Smith, Smith's producing partner Scott Mosier and former Seinfeld writer David Mandel with character designs by Stephen Silver, known for character designs in Disney's Kim Possible and Nickelodeon's Danny Phantom. It is the first television show to be set in Smith's View Askewniverse. 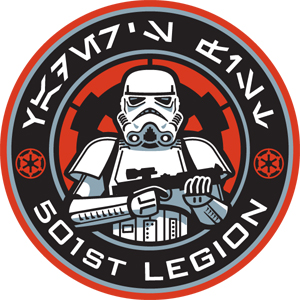 The 501st Legion is an international fan-based organization dedicated to the construction and wearing of screen-accurate replicas of Imperial Stormtrooper armor, Sith Lords, Clone Troopers, bounty hunters, and other villains from the Star Wars universe. The 501st Legion, called by its nickname Vader's Fist, is made up entirely of volunteers.

Clerks is a series of comics published in the late 1990s by Oni Press that continue the adventures of Dante, Randal and other characters from Kevin Smith's film Clerks Written by Smith but illustrated by varying artists, the style in these comics is very different from that of the later animated series. The books were republished in paperback and hardcover, and were compiled into Clerks , published by Image Comics in March 2000.

George Lucas's science fiction multi-film Star Wars saga has had a significant impact on modern popular culture. Star Wars references are deeply embedded in popular culture; references to the main characters and themes of Star Wars are casually made in many English-speaking countries with the assumption that others will understand the reference. Darth Vader has become an iconic villain, while characters such as Luke Skywalker, Han Solo, Princess Leia, C-3PO, R2-D2, and Chewbacca have all become widely recognized characters around the world. Phrases such as "evil empire", "May the Force be with you", Jedi mind trick, and "I am your father" have become part of the popular lexicon. The first Star Wars film in 1977 was a cultural unifier, enjoyed by a wide spectrum of people. 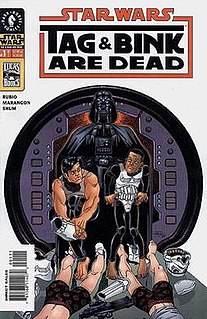 Tag and Bink are the main characters in a Star Wars spoof series of comic books that parody the films. The characters were created by writer Kevin Rubio and artist Lucas Marangon. They are a pair of minor characters who deliberately or accidentally influence the events in the first and second film trilogies, whose activities explain some of the implausible events of the series. The title of their initial appearance—Tag & Bink Are Dead—is a reference to the Tom Stoppard play Rosencrantz and Guildenstern Are Dead, itself titled after a line from Hamlet.

A Star Wars Pez is a Pez candy dispenser themed after the Star Wars movies, and is one of the company's most prominent merchandising deals. Over fifty dispensers have been released on the market from 1997 to 2020, among the many collectibles spawned by the franchise. 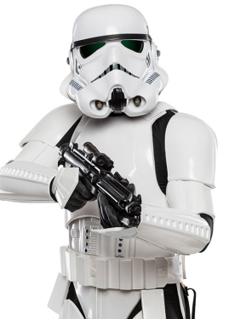 A stormtrooper is a fictional soldier in the Star Wars franchise created by George Lucas. Introduced in Star Wars: A New Hope (1977), the stormtroopers are the soldiers shock troops/space marines of the Galactic Empire, under the leadership of Emperor Palpatine and his commanders, most notably Darth Vader and Grand Moff Tarkin, during the original film trilogy (1977–1983). The prequel trilogy (1999–2005) establishes their origin as the Galactic Republic's clone troopers, clones of the bounty hunter Jango Fett, used by Supreme Chancellor Palpatine to "win" the Clone Wars and later to take over the government and exterminate the Jedi. Despite this, later stormtroopers are established as recruits; at the time of the original trilogy, only a few stormtroopers are clones, with the only known legion to still contain a significant number of clones being the 501st Legion, aka "Vader's Fist". In the sequel trilogy (2015–2019), the upgraded stormtroopers serve the First Order under the leadership of Supreme Leader Snoke and his commanders, most notably Kylo Ren, General Hux, and Captain Phasma. The final film of the trilogy, The Rise of Skywalker (2019), introduces Sith Troopers, an upgraded variant of the First Order stormtroopers that sport red armor and serve the Sith Eternal, led by a resurrected Emperor Palpatine. 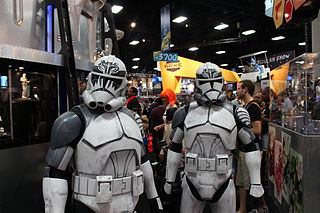 "Robot Chicken: Star Wars Episode II" is a 2008 episode of the television comedy series Robot Chicken, and the sequel to the Annie Award winning "Robot Chicken Star Wars", which aired as a one-off special during Cartoon Network's Adult Swim block on November 16, 2008. Like "Robot Chicken: Star Wars" it has been released on its own DVD, on July 21, 2009, and will not be part of a season box set. The DVD contains the original broadcast version, and the "Extended Version", which features an additional 15 minutes of footage cut from the broadcast version. It was nominated for a 2009 Primetime Emmy Award for Outstanding Animated Program.

Captain Phasma is a fictional character in the Star Wars franchise, portrayed by English actress Gwendoline Christie. Introduced in Star Wars: The Force Awakens (2015), the first film in the Star Wars sequel trilogy, Phasma is the commander of the First Order's force of stormtroopers. Christie returned to the role in the next of the trilogy's films, Star Wars: The Last Jedi (2017), and in the animated television series Star Wars Resistance (2018) and several video games. The character also made an additional appearance in Before the Awakening, an anthology book set before the events of The Force Awakens.

Clerks III is an upcoming American comedy film written, produced, directed, and edited by Kevin Smith. It is intended to serve as the sequel to the 1994 and 2006 films, and the ninth overall feature film set in the View Askewniverse. Starring Brian O'Halloran, Jeff Anderson, Marilyn Ghigliotti, Rosario Dawson, Trevor Fehrman, Jason Mewes, and Smith; the film revolves around Randal Graves, who after surviving a heart attack, wants to make a movie with Dante Hicks about their lives at the Quick Stop.