Troy Brosnan (born 13 July 1993 in Adelaide, South Australia) is an Australian professional racing cyclist specialising in downhill mountain bike racing. As a junior, he was twice world champion, once Oceanian champion, and once Australian national champion in the downhill. [2] In the elite category he has twice been third overall in the world cup and is a four-time Australian champion. [2]

He won the first round of the 2021 Downhill World Cup season in Léogang, Austria. 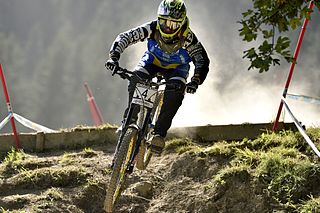 Sam Hill, is an Australian professional enduro mountain biker and former professional downhill racer. He was two time consecutive UCI World Downhill Champion during years 2006–2007 for Iron Horse racing team. He won the 2010 world championships in Mont Saint Anne, riding for the Monster Energy Specialized team on a Specialized Demo 8 II. He also won the 2007 and 2009 UCI Elite Men's Downhill World Cup (Overall). In December 2012 it was announced that Hill had signed for the Chain Reaction Cycles/Nukeproof team. As of 2016, Hill has switched to racing enduro and won the 2017 Enduro World Series overall title. In the same year he raced the Downhill World Championships in Cairns, Australia on his enduro bike where he finished sixth. 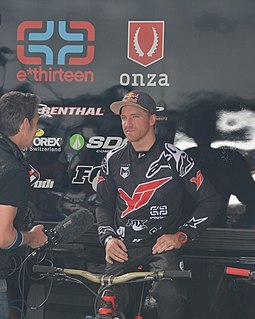 Joshua Antonio Torres Bryceland, known as Josh Bryceland, and commonly referred to by his nickname, Ratboy, born 23 March 1990, in Manchester is a professional downhill mountain biker, who lives in Higher Poynton, Cheshire, England.

The Santa Cruz Syndicate, is a professional mountain bike racing team sponsored by Santa Cruz Bikes, competing in the World Cup and World Championships, as well as national level events, in the downhill category. The Syndicate was founded in 2006, and its early roster included Steve Peat, Nathan Rennie, Jamie Goldman, and John Waddell. From 2008 through 2016, the team roster consisted of Steve Peat, Greg Minnaar, and Josh Bryceland. After the 2016 season, Peat retired and Bryceland left the downhill circuit, leaving Minnaar as the senior member of the team. Young riders Luca Shaw and Loris Vergier joined starting with the 2017 season. 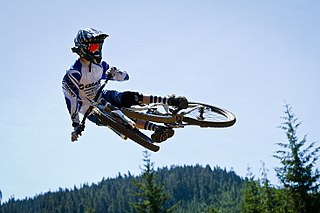 Michael Hannah is a professional downhill mountain biker and the older brother of Tracey Hannah. He is the understudy of Roslin Kummin and is sponsored by Urata. Sometimes he likes to go spearfishing and camping, but most of his time is spent to riding/training. 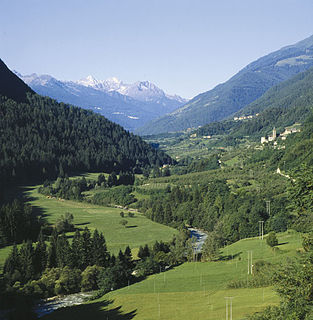 Loris Vergier is a French downhill mountain bike rider. As a Junior, he won first place at the 2014 UCI Downhill Mountain World Championships.