Troy Ladd (born April 4 in Newport Beach, CA) is an American designer and builder of custom cars and hot rods from Burbank, CA known for building traditional styled vehicles. [1] After obtaining a Bachelor's degree in Business from Vanguard University, Troy formulated a business plan for Hollywood Hot Rods, taking into account location, size of the building and equipment. [2] In 2002 Headquarters for Hollywood Hot Rods were set up in Burbank, CA. [3] Industry magazines took notice of the cars being built at Hollywood Hot Rods and titles such as Street Rodder Magazine, Hot Rod Magazine and Rod & Custom were responsible for getting the word out about Troy Ladd’s shop. [4]

Starting at an early age, Troy Ladd began working on vintage vehicles with the desire to create unique cars. [5] Troy developed his building skills on his own cars and transferred them into a business building specialty cars for customers of his Hollywood Hot Rods, the business he established in 2002. Troy Ladd builds vehicles in a style inspired by hot rodding’s past that “Respects Tradition” at the same time looking forward into the future of specialty car building. [6]

Building award winning vehicles for over a decade Troy Ladd has been recognized as the Goodguys Rod & Custom Association/SEMA 2007 Trendsetter Award Recipient, Grand National Roadster Show 2010 Builder of the Year and L.A. Roadsters 2012 Builder of the Year. [7] Troy Ladd builds vehicles that range from hot rods like the “Respect Tradition” 1932 Ford Roadster to customs like the “Ruby Deluxe” 1935 Ford Coupe.

The Grand National Roadster Show, started in 1949, is one of the oldest and longest continuously operating exhibitions of custom vehicles in the United States.

The Ford Mustang is an American car manufactured by Ford. It was originally based on the platform of the second generation North American Ford Falcon, a compact car. The original 1962 Ford Mustang I two-seater concept car had evolved into the 1963 Mustang II four-seater concept car which Ford used to pretest how the public would take interest in the first production Mustang. The 1963 Mustang II concept car was designed with a variation of the production model's front and rear ends with a roof that was 2.7 inches shorter. Introduced early on April 17, 1964, and thus dubbed as a "1964½" by Mustang fans, the 1965 Mustang was the automaker's most successful launch since the Model A. The Mustang has undergone several transformations to its current sixth generation.

The Mercury Comet is an automobile that was produced by Mercury from 1962–1969 and 1971–1977 — variously as either a compact or an intermediate car.

Hot August Nights is an annual event held in Reno and Virginia City, Nevada during the days of 2nd-7th on the month of August. The event is mostly around classic vehicles manufactured before the 1970s, and is based on Rock And Roll as well.

Ford produced three cars between 1932 and 1934: the Model B, Model 18 & Model 40. These succeeded the Model A. The Model B continued to offer Ford's proven four cylinder and was available from 1932 to 1934. The V8 was succeeded by the Model 48. It was the first Ford fitted with the flathead V‑8. In Europe, it was built slightly longer. The same bodies were available on both 4 cylinder Model Bs and V8 Model 18/40s. The company also replaced the Model AA truck with the Model BB, available with either the four- or eight-cylinder engine. 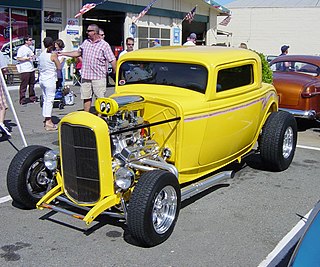 Hot rods are typically old, classic or modern American cars with large engines modified for faster speed. The origin of the term "hot rod" is unclear. For example, some claim that the term "hot" refers to the vehicle being stolen. Other origin stories include replacing the engine's camshaft or "rod" with a higher performance version.

A rat rod is a style of hot rod or custom car that, in most cases, imitates the early hot rods of the 1940s, 1950s, and early-1960s. The style is not to be confused with the somewhat closely related "traditional" hot rod, which is an accurate re-creation or period-correct restoration of a hot rod from the same era. 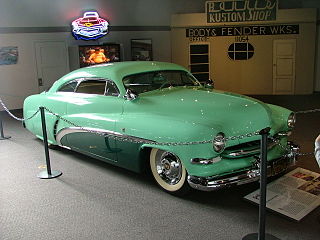 Boyd Leon Coddington was an American hot rod designer, the owner of the Boyd Coddington Hot Rod Shop and star of American Hot Rod on TLC. 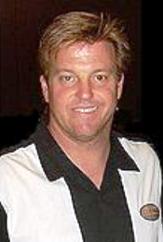 The Detroit Autorama, also known as America's Greatest Hot Rod Show, is a showcase of custom cars and hot rods held each year at Cobo Hall in Detroit, Michigan, in either late February or early March.

The Ford Model A, was the second successful vehicle model for the Ford Motor Company, after its predecessor, the Model T. First produced on October 20, 1927, but not introduced until December 2, it replaced the venerable Model T, which had been produced for 18 years. This new Model A was designated a 1928 model and was available in four standard colors.

Gene Winfield is an American automotive customizer. In the mid-1960s, his designs caught the attention of the film community, resulting in a large body of his work being seen on screen, including in the iconic 1982 film Blade Runner.

Bodie Stroud is a custom automobile designer and classic car builder. He starred in "Rock My RV" on the Travel Network.

Ala Kart is a custom car, a customized 1929 Ford Model A roadster pickup, built by George Barris, Richard Peters, and Mike "Blackie" Gejeian in 1957. Originally owned by Peters, it is a two-time winner of the Grand National Roadster Show "America's Most Beautiful Roadster" (AMBR) trophy and Hot Rod cover car in October 1958. Featured in hundreds of car shows, Ala Kart has won more than 200 trophies. It has also made numerous appearances in movies, usually in the background of drive-in shots, and dozens of magazine articles since. It is considered by many to be "one of the most iconic hot rods ever built."

Michael "Blackie" Gejeian was an American race car driver, race car builder, and hot rod enthusiast. Considered an "Industry Legend", Gejeian was the organizer of the Autorama, one of the largest custom car shows in North America, held annually in Fresno, California.

Richard Megugorac, commonly known as Dick or by his nickname Magoo, was an American land speed racer and customizer.

Pete Chapouris was an American hot rodder and customizer. He is best known for creating The California Kid '34 3-window, and also as partner in Pete & Jake's Hot Rod Shop.

George Poteet is a Memphis-based land speed racer and winner of the 1996 Ridler Award.

Don Pilkenton is a car customizer based in Ohio, United States. He has built three cars to win the Ridler Award, in 1993, 1996, and 1999. He was the first builder to win the award three times.