Troy Westwood (born March 21, 1967) is a former professional Canadian football place kicker and punter who played 18 years for the Winnipeg Blue Bombers of the Canadian Football League. He was drafted 48th overall in the 6th round of the 1991 CFL Draft by the Blue Bombers and holds several club records, including most points scored in a career (2748) and most points scored in a single season (213).

Westwood was born in Dauphin, Manitoba and raised in Winnipeg. He attended Augustana University in Sioux Falls, South Dakota and graduated in 1991. [1] He played college football for the Augustana College Vikings and was inducted into their Hall of Fame in 2011. [2] Westwood was a gifted youth soccer player, playing for the Manitoba provincial soccer team and invited to a camp for the U18 national team. He was drafted by the Winnipeg Fury of the Canadian Soccer League. [3]

Westwood was selected by the Bombers in the 1991 season, when he was selected 48th overall in the 6th round of the Canadian College Draft. Westwood was also known for his mullet, which he reportedly vowed not to cut until he wins the Grey Cup. He decided to grow it out after the 2001 Grey Cup loss to Calgary, in which he missed three out of four field goal attempts. In a radio interview, he publicly denied this claim and attributed his hair to his spirituality, and resents the notion that his hair has anything to do with football. This poor performance capped off what was Westwood's worst season statistically as he only converted on 60.8% of his field goal attempts that year.

After a disappointing start to the 2007 season against Edmonton, Westwood was told by Bomber coach Doug Berry not to dress for the second game of the season against Montreal. After replacement Rob Pikula went 1/2 in field goals, Westwood was reinstated as the Bomber's place kicker by the third game of the season. In the 7th game of the season however, Westwood sustained a hamstring injury and his future with the club was again in doubt. However, after injuries to Pikula and newly signed Pat Fleming, Westwood was called upon for kicking and punting duties in the Eastern Semi-Final where he went 1/2, kicking the game-winning field goal from 20 yards out with no time left on the clock.

He is known for stirring things up off-field: he has tried his hand at professional boxing and tap dancing, and had a public feud with Montreal Alouette Ed Philion. He is arguably most known for his tongue-in-cheek insult of the rival Saskatchewan Roughriders' fans by calling them "banjo-pickin' inbreds." He later followed that up with a faux apology, saying he did not think anyone in Saskatchewan was actually capable of playing a banjo. These quotes inspired the Banjo Bowl.

Westwood, who was exposed to First Nations culture growing up in Dauphin, has also recorded several albums inspired by First Nations music, both in the band Eagle & Hawk and later as a solo artist named Little Hawk. [6] [7]

After retiring from football, Westwood was an on-air host for CFQX-FM in Winnipeg from March 2009 to March 2011. He was a morning host on CFRW, Winnipeg's TSN Radio station until the closing of the station by Bell Media in January 2021.

Alexis Serna is a former placekicker and punter who played in the Canadian Football League from 2008 to 2010 for the Winnipeg Blue Bombers. He graduated from A. B. Miller High School in Fontana, California. He was the starting placekicker and punter for the Oregon State University football team, the Oregon State Beavers, from 2004-2007. He won the 2005 Lou Groza Award which recognized him as the best placekicker in the United States. On June 3, 2008, Serna signed a contract with the Winnipeg Blue Bombers of the Canadian Football League and was the team's starting kicker, replacing Troy Westwood. On August 10, 2010, Serna was released by the Blue Bombers.

Robert Pikula is a kicker/punter free agent who most recently played for the Edmonton Eskimos of the Canadian Football League. He went to The University of Western Ontario and played for the Western Mustangs, and was named a 2004 CIS All-Star. He was signed by the Saskatchewan Roughriders in February 2006. During training camp, he shared kicking duties with Luca Congi. He was released by the Roughriders in June 2006 and signed as a free agent by the Lions on June 20. He played 4 games for the Lions on his first season in 2006 as a backup kicker and punter where he hit 6/7 field goals, 85.7%, and punted 6 times with 48.2 yard average. He was dressed during B.C.'s 2006 Grey Cup victory. The Blue Bombers traded the BC Lions a third round draft pick for the 2008 draft to acquire Rob during the second week of the 2007 CFL season. In February, 2008, he was traded back to B.C. in exchange for Sebastian Clovis then traded on to Edmonton on March 20 in exchange for a higher draft pick. 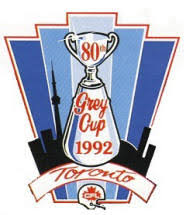 Sandro DeAngelis is a former professional gridiron football placekicker. He last played during the 2013 season for the Winnipeg Blue Bombers of the Canadian Football League. He had also played for the Saskatchewan Roughriders, Montreal Alouettes, Calgary Stampeders and the Hamilton Tiger-Cats. DeAngelis is among the most accurate kickers in CFL history and he won his first Grey Cup championship with the Calgary Stampeders in 2008. 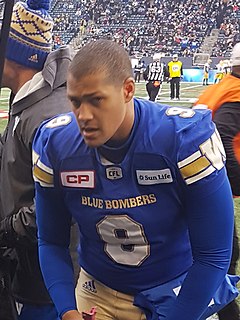 Justin Charles Medlock is an American professional player of Canadian football who is a placekicker for the Winnipeg Blue Bombers of the Canadian Football League (CFL). He played college football for the University of California, Los Angeles (UCLA), and earned consensus All-American honors. The Kansas City Chiefs selected him in the fifth round of the 2007 NFL Draft. Medlock has also played for the Hamilton Tiger-Cats, Toronto Argonauts and Edmonton Eskimos of the CFL, as well as the Carolina Panthers of the National Football League (NFL).

Samuel Paulescu is a former American football punter in the National Football League for the Denver Broncos, Dallas Cowboys, Tampa Bay Buccaneers and Washington Redskins. He also was a member of the Winnipeg Blue Bombers in the Canadian Football League. He played college football at Oregon State University.

Kai August Forbath is an American football placekicker who is a free agent. He played college football at UCLA and was recognized as an All-American and the best college kicker in the country in 2009. Forbath was signed by the Cowboys as an undrafted free agent in 2011, and has played for Washington, New Orleans Saints, Minnesota Vikings, Jacksonville Jaguars, Dallas Cowboys, and New England Patriots.

Justin Palardy is a professional Canadian football placekicker who is currently a free agent. He was drafted 36th overall by the Hamilton Tiger-Cats in the 2010 CFL Draft and was used as a punter. After being released by the Tiger-Cats, he was signed by the Winnipeg Blue Bombers as their placekicker, where he played for four seasons. Palardy also spent some time on the Ottawa Redblacks roster. In the 2010 season, he set the Blue Bombers single season record for place-kicking accuracy with 86.7%, a feat he would equal in 2012. He played CIS football for the Saint Mary's Huskies.

The 2012 Saskatchewan Roughriders season was the 55th season for the team in the Canadian Football League. The Roughriders finished the season in 3rd place in the West Division with an 8–10 record, improving upon their 5–13 record from 2011. The Roughriders qualified for the playoffs and lost to the Calgary Stampeders in the Western Semi-Final.

Brody McKnight is a Canadian athlete He is a free agent. 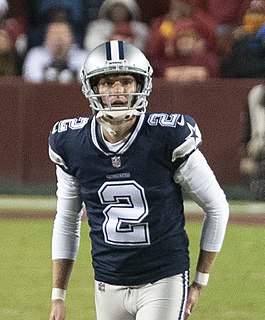 Brett Maher is an American football placekicker and punter who is a free agent. He was signed by the New York Jets as an undrafted free agent in 2013. He played college football at Nebraska. He has also been a member of the Dallas Cowboys, Winnipeg Blue Bombers, Ottawa Redblacks, Hamilton Tiger-Cats, Cleveland Browns, Washington Football Team, Houston Texans, and Arizona Cardinals. 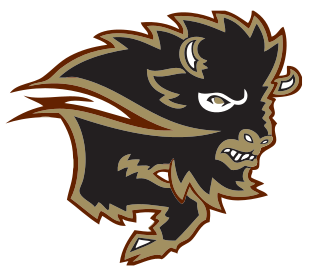 The Manitoba Bisons football team represents the University of Manitoba in the sport of Canadian football in U Sports. The program was the first of four U Sports football teams to have won back-to-back Vanier Cup championships, having won in 1969 and 1970. In total, the Bisons have won three Vanier Cup national championships and 11 Hardy Trophy conference championships. The Bisons are led by head coach, Brian Dobie, who has been the head coach since 1996.

Troy Stoudermire is an American professional Canadian football defensive back and return specialist who plays for the Caudillos de Chihuahua of the Fútbol Americano de México. He played college football at Minnesota. He has also been a member of the Cincinnati Bengals, Saskatchewan Roughriders, Winnipeg Blue Bombers, Minnesota Vikings, Edmonton Eskimos, Calgary Stampeders, and Ottawa Redblacks.

Colt Justin David is a former American football placekicker who played one season with the Montreal Alouettes of the Canadian Football League (CFL). He played college football at Louisiana State University and attended Grapevine High School in Grapevine, Texas. He was a member of the 2007 LSU Tigers national championship football team and the 98th Grey Cup winning Montreal Alouettes. 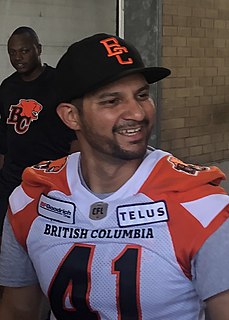 Sergio Castillo is a professional gridiron football placekicker and punter who is currently a free agent. He played college football at West Texas A&M.