The Troy and Greenfield Railroad, chartered in 1848, ran from Greenfield, Massachusetts, United States, to the Vermont state line. It was leased to the Troy and Boston Railroad in 1856, then consolidated into Fitchburg Railroad 1887 which in turn was acquired by Boston and Maine Railroad by lease in 1900. 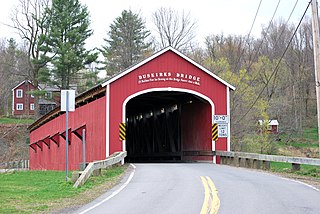 Hoosick is a town in Rensselaer County, New York, United States. The population was 6,924 at the 2010 census. It was named from the Hoosic River. 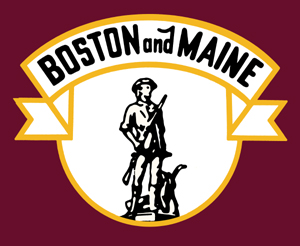 The Boston and Maine Railroad was a U.S. Class I railroad in northern New England. It became part of what is now the Pan Am Railways network in 1983.

The Hoosic River, also known as the Hoosac, the Hoosick and the Hoosuck, is a 76.3-mile-long (122.8 km) tributary of the Hudson River in the northeastern United States. The different spellings are the result of varying transliterations of the river's original Algonquian name. It can be translated either as "the beyond place" or as "the stony place". 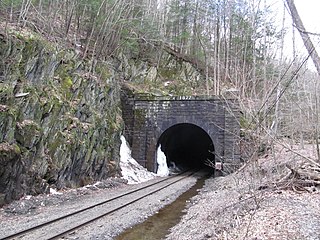 The Hoosac Tunnel is a 4.75-mile (7.64 km) active railroad tunnel in western Massachusetts that passes through the Hoosac Range, an extension of Vermont's Green Mountains. It runs in a straight line from its east portal, along the Deerfield River in the town of Florida, to its west portal in the city of North Adams.

The Central Vermont Railway was a railroad that operated in the U.S. states of Connecticut, Massachusetts, New Hampshire, New York, and Vermont, as well as the Canadian province of Quebec.

The St. Lawrence and Atlantic Railroad, known as St-Laurent et Atlantique Quebec in Canada, is a short-line railway operating between Portland, Maine, on the Atlantic Ocean, and Montreal, Quebec, on the St. Lawrence River. It crosses the Canada–US border at Norton, Vermont, and Stanhope, Quebec, and is owned by short-line operator Genesee & Wyoming. 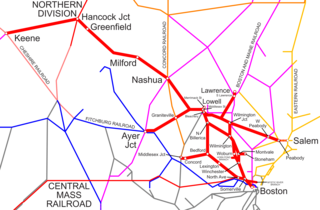 The Boston and Lowell Railroad was a railroad that operated in Massachusetts in the United States. It was one of the first railroads in North America and the first major one in the state. The line later operated as part of the Boston and Maine Railroad's Southern Division. 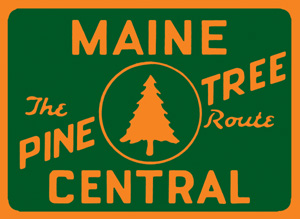 The Maine Central Railroad Company was a former U. S. Class I railroad in central and southern Maine. It was chartered in 1856 and began operations in 1862. By 1884, Maine Central was the longest railroad in New England. Maine Central had expanded to 1,358 miles (2,185 km) when the United States Railroad Administration assumed control in 1917. The main line extended from South Portland, Maine, east to the Canada–United States border with New Brunswick, and a Mountain Division extended west from Portland to Vermont and north into Quebec. The main line was double track from South Portland to Royal Junction, where it split into a "lower road" through Brunswick and Augusta and a "back road" through Lewiston which converged at Waterville into single track to Bangor and points east. Branch lines served the industrial center of Rumford, a resort hotel on Moosehead Lake, and coastal communities from Bath to Eastport.

The Boston and Albany Railroad was a railroad connecting Boston, Massachusetts to Albany, New York, later becoming part of the New York Central Railroad system, Conrail, and CSX Transportation. The line is currently used by CSX for freight. Passenger service is still provided on the line by Amtrak, as part of their Lake Shore Limited service, and by the MBTA Commuter Rail system, which owns the section east of Worcester and operates it as its Framingham/Worcester Line. 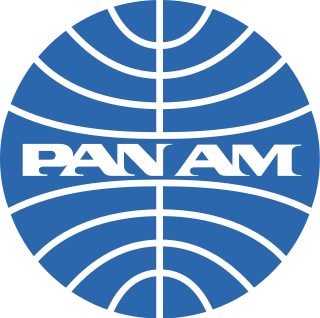 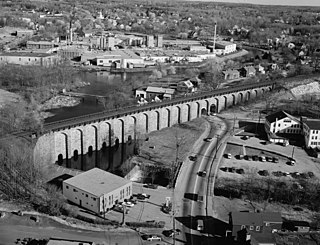 The Boston and Providence Railroad was a railroad company in the states of Massachusetts and Rhode Island which connected its namesake cities. It opened in two sections in 1834 and 1835 - one of the first rail lines in the United States - with a more direct route into Providence built in 1847. Branches were built to Dedham in 1834, Stoughton in 1845, and North Attleboro in 1871. It was acquired by the Old Colony Railroad in 1888, which in turn was leased by the New Haven Railroad in 1893. The line became the New Haven's primary mainline to Boston; it was realigned in Boston in 1899 during the construction of South Station, and in Pawtucket and Central Falls in 1916 for grade crossing elimination. 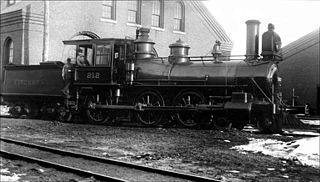 The Fitchburg Railroad is a former railroad company, which built a railroad line across northern Massachusetts, United States, leading to and through the Hoosac Tunnel. The Fitchburg was leased to the Boston and Maine Railroad in 1900. The main line from Boston to Fitchburg is now operated as the MBTA Fitchburg Line; Pan Am Railways runs freight service on some other portions. 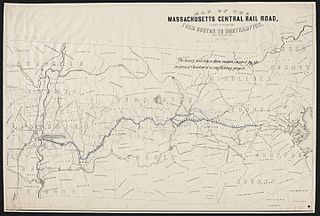 The Central Massachusetts Railroad was a railroad in Massachusetts. The eastern terminus of the line was at North Cambridge Junction where it split off from the Middlesex Central Branch of the Boston and Lowell Railroad in North Cambridge and through which it had access to North Station in Boston. From there, the route ran 98.77 miles west through the modern-day towns of Belmont, Waltham, Weston, Wayland, Sudbury, Hudson, Bolton, Berlin, Clinton, West Boylston, Holden, Rutland, Oakham, Barre, New Braintree, Hardwick, Ware, Palmer, Belchertown, Amherst, and Hadley to its western terminal junction at N. O. Tower in Northampton with the Connecticut River Railroad. 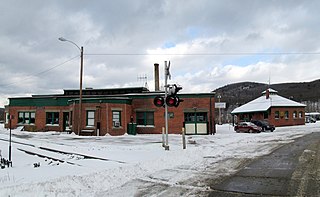 Bellows Falls station is an Amtrak intercity rail station located in the Bellows Falls village of Rockingham, Vermont, United States. The station is served by the single daily round trip of the Washington, D.C.–St. Albans Vermonter. It has a single side platform adjacent to the single track of the New England Central Railroad mainline. 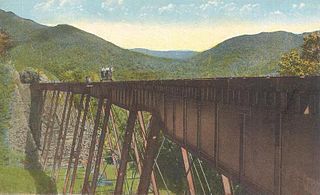 The Mountain Division is a railroad line that was once owned and operated by the Maine Central Railroad (MEC). It stretches from Portland, Maine on the Atlantic Ocean, through the Western Maine Mountains and White Mountains of New Hampshire, ending at St. Johnsbury, Vermont in the Northeast Kingdom. The line was abandoned in 1983 by MEC's successor, Guilford Transportation Industries (GTI). Guilford retained a stub between Portland and Westbrook. A section in New Hampshire remains in use by heritage railway Conway Scenic Railroad.

The Springfield Terminal railroad bridge in Deerfield, Massachusetts, is a three-span deck-truss bridge which crosses the Connecticut River.

The Connecticut River Railroad was a railroad located along the Connecticut River in western Massachusetts, formed in 1845 from the merger of two unfinished railroads. Its main line from Springfield to East Northfield, Massachusetts, opened in stages between 1845 and 1849. It built several branches and over the years acquired additional lines in Vermont. The railroad was acquired by the Boston and Maine Railroad in 1893. 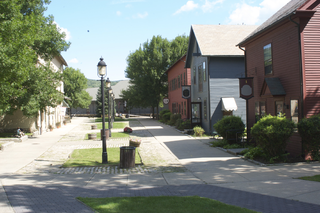 Western Gateway Heritage State Park is a history-focused Massachusetts state park in the city of North Adams managed by the Department of Conservation and Recreation. Exhibits at the park, which is located in a former railyard, tell the story of the creation of the Hoosac Tunnel. The freight yard was listed on the National Register of Historic Places in 1972 as the Freight Yard Historic District. 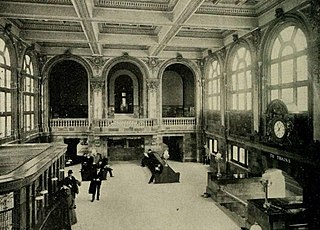 Union Station was the main passenger railroad station of Troy, New York until it went out of service in 1958. A Beaux-Arts building, designed by Reed & Stem and completed ca. 1903, it served the New York Central Railroad (NYC), the Boston and Maine Railroad (B&M) and the Delaware and Hudson Railroad (D&H). This was the fourth union station in Troy. The tracks approaching the station were but feet away from homes.