Trunk and toll calling were two alternative methods of charging customers for long-distance calls in the United Kingdom in the first half of the 20th century. The distinction became obsolete with the introduction subscriber trunk dialling (STD).

In the UK, local as well as long-distance telephone calls were chargeable to the caller and the term trunk calling was adopted for long-distance calls.

Initially a trunk call had to be booked in advance and a switchboard operator called the subscriber when the call set-up was completed; a process known as 'delay working'. Due to increasing demands for trunk calls from London and the associated delays in connecting them, calls to exchanges adjacent to the London director area were transferred to a new toll exchange opened on 17 September 1921. [1] Calls to toll area exchanges were connected on-demand whilst the originating subscriber waited, thus improving service and reducing operator costs. The London Toll Area boundary was extended in 1923 and again in 1928, so that eventually Southampton, Portsmouth, Reading, Bedford, Colchester and the whole of Kent and Sussex were included. The system was later introduced to other large cities and remained in use until the late 1950s when, with the advent of Subscriber Trunk Dialling, Toll was eventually phased out. The name toll was probably taken from US usage.[ citation needed ]

In London, telephone calls to subscribers who were not serviced by Director telephone systems within local call-charging range of the London Director exchange area were carried by tandem exchange Toll A: a subscriber would dial a prefix code, typically two letters plus zero, one or two figures (e.g. DA, EP5, LK85) followed by the number of the other subscriber on the fringe non-director exchange. To avoid confusion, three-letter dialling codes were not used for calls from the director area to the fringe area, even if they corresponded to the same holes in the dial (e.g. the Hoddesdon and Mogador codes were HO3 and MO4 respectively). Calls from fringe non-director exchanges to numbers within the director area were passed in two ways. For those to director exchanges near the area boundary adjacent to the non-director exchange, subscribers were often given numerical codes to dial, and told to follow the code with the numerical portion of the other subscriber's number: these direct routings permitted the use of short unamplified lines. For director exchanges remote from the area boundary, the subscriber was told to dial a code (typically 7, 87 or exceptionally 1), to wait for a second dialling tone, and to follow this with the three letters and four figures of the other number. These calls were handled by tandem exchange Toll B, from which the second dialling tone originated. To have a second dialling tone in this way was very unusual on the PSTN in the UK, although the French and Belgian PTTs had a similar instruction for when their customers made international calls.

The distinction between trunk and toll became irrelevant when subscriber trunk dialling was introduced.

In North America, local telephone calls were typically unmetered and included in flat rate billing. The term toll calling was adopted for long-distance calls which were subject to toll charges. 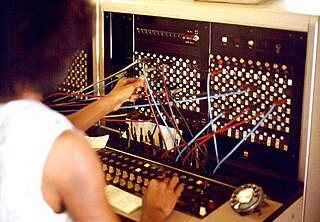 Direct distance dialing (DDD) is a telecommunication service feature in North America by which a caller may, without operator assistance, call any other user outside the local calling area. Direct dialing by subscribers typically requires extra digits to be dialed as prefixes to the directory telephone number of the destination. International Direct Distance Dialing (IDDD) extends the system beyond the geographic boundaries of the North American Numbering Plan (NANP). 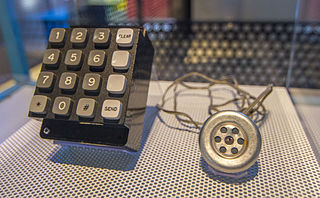 A blue box is an electronic device that produces tones used to generate the in-band signaling tones formerly used within the North American long-distance telephone network to send line status and called number information over voice circuits. This allowed the user, referred to as a "phreaker", to surreptitiously place long-distance calls that would be billed to another number or dismissed entirely as an incomplete call. A number of similar "color boxes" were also created to control other aspects of the phone network.

The North American Numbering Plan (NANP) is a telephone numbering plan for twenty-five regions in twenty countries, primarily in North America and the Caribbean. This group is historically known as World Zone 1 and has the international calling code 1. Some North American countries, most notably Mexico, do not participate in the NANP.

A telephone call is a connection over a telephone network between the called party and the calling party.

Subscriber trunk dialling (STD), also known as subscriber toll dialing, is a telephone numbering plan feature and telecommunications technology for the dialing of trunk calls by telephone subscribers without the assistance from switchboard operators.

The director telephone system was a development of the Strowger or step-by-step (SXS) switching system used in London and five other large cities in the UK from the 1920s to the 1970s. 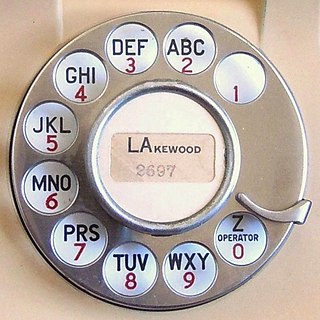 A linked numbering scheme (LNS) is a dialing procedure in effect in a service area within which call routing between adjacent exchanges does not require a dialing code. The term is only used in the United Kingdom, but not in the North American Numbering Plan.

An intercept message is a telephone recording informing the caller that the call cannot be completed, for any of a number of reasons ranging from local congestion, to disconnection of the destination phone, number dial errors or network trouble along the route.

The original North American area codes were established by the American Telephone & Telegraph Company (AT&T) in the immediate post-WWII period. Creating a comprehensive and universal, continent-wide telephone numbering plan was a basic requirement for nationwide Operator Toll Dialing which had the goal of speeding the connecting times for long-distance calling by eliminating intermediary telephone operators. It had the eventual benefit of direct distance dialing (DDD) by telephone subscribers. It established a uniform destination addressing and call routing system for all telephone networks in North America that had become an essential public service.

A telephone exchange, telephone switch, or central office is a telecommunications system used in the public switched telephone network (PSTN) or in large enterprises. It interconnects telephone subscriber lines or virtual circuits of digital systems to establish telephone calls between subscribers.

A group switching centre (GSC) was a United Kingdom telephone exchange used to provide local and trunk routing to local exchanges within its own and if required, adjacent group areas.

Operator Toll Dialing was a telephone call routing and toll-switching system for the Bell System and the independent telephone companies in the United States and Canada that was developed in the 1940s. It automated the switching and billing of long-distance calls. The concept and technology evolved from the General Toll Switching Plan of 1929, and gained technical merits by the cutover of a new type of crossbar switching system in Philadelphia to commercial service in August 1943. This was the first system of its kind for automated forwarding of calls between toll switching centers, but it served customers only for regional toll traffic. It established initial experience with automatic toll switching for the design of a nationwide effort that was sometimes referred to as Nationwide Operator Toll Dialing.