Poor lending strategies led the Tasmania Bank to crisis in 1989, and through financial injection by the state government and the inclusion of the Savings Bank of Tasmania, a merger was considered. [1] The state government deliberated, and put forth the Trust Bank (Arrangements) Act 1991, which gained Royal Assent on 1 May 1991. The new company operated as a trustee bank structure like those of its predecessors. [2]

The Trust Bank was an important institution within the state for its short period, through financial backing of local business and by community sponsorship. Trust Bank was official sponsor of the Tasmania cricket team in the late 90s, and funded its own art prize. In 1997 Trust Bank was registered through the Australian Securities Commission and became a limited company corporation with shareholders. [3] Regardless, Trust Bank had difficulty in maintaining competitiveness in the Australian capital market, especially during a time of large market share between rival credit unions and banks. [1]

On 16 November 1999, Colonial Limited announced that it would acquire Trust Bank through its wholly owned subsidiary State Bank of New South Wales, for $149.1 million from the Tasmanian Government. At this time, Trust Bank had 40 branches statewide, and held more than 30% of the Tasmanian retail deposit market. 25% of outstanding loans in the state were through Trust Bank. [4]

The state government was adamant about privatisation as a way of benefiting Tasmanians, and Colonial agreed to no job losses or branch closures. Trust Bank continued as Colonial Trust Bank. [5] On 10 March 2000 Commonwealth Bank and Colonial announced their intention to merge, which caused vocal concerns by the Tasmanian Labor government. The Federal Liberal government argued that the Tasmanian government had to abide by competition policy. The Australian Competition and Consumer Commission did not oppose the merger. [6] Up to 300 jobs and 30 branches were expected to close after the merger. [7]

On 31 May 2000 the two banks merged, after the Commonwealth Bank appeased the Tasmanian Government by agreeing to establish either one or more call centres in Tasmania, to provide $4 million for computers in local schools and to maintain rural branches; although this agreement was only applicable for five years. The Commonwealth Bank now held over 50% of the Tasmanian banking market. [7]

Trust Bank as a brand continued until the end of May 2000, when the Commonwealth Bank transferred accounts and policies to their division, and began integration of Colonial Trust Bank assets.

An inquiry into the sale of Trust Bank was established in Tasmania by the Parliamentary Standing Committee of Public Accounts. In it, the benefits of the sale were prescribed as a revenue of $5 million from stamp duty due to the sale, and $98.24 million had been used to reduce state debt. it was hoped a total of $134.1 million could be used in debt reduction. It also discussed pressure placed upon the directors of the Trust Bank, particularly in regards to funding and studies about information technology. [8]

Today, no significant physical proof of the Trust Bank exists. Many old branches were sold off or re-branded Commonwealth Bank.

Following the sale, the state government passed the Trust Bank Sale Act 1999 on 26 November 2000, which repealed all laws related to the Bank and officially disbanded the board of directors. The Act also established the Tasmanian Community Fund using money from the sale of Trust Bank, and the fund continues today. [9]

Bankwest, previously known as The Bank of Western Australia, is an Australian full-service bank based in Perth, Western Australia. It was sold in October 2008 to the Commonwealth Bank of Australia for A$2.1 billion and operates as a division of its parent company.

The Australia and New Zealand Banking Group Limited, commonly called ANZ, is an Australian multinational banking and financial services company headquartered in Melbourne, Australia. It is the second largest bank by assets and third largest bank by market capitalisation in Australia.

St.George Bank is an Australian bank with its headquarters in Sydney. Since a 2008 merger, the bank has been part of Westpac, having previously been an independent legal entity. In 2010 St.George was deregistered as a company and ceased to be a standalone authorised deposit-taking institution.

Gail Kelly is a South African-born Australian businesswoman. In 2002, she became the first female CEO of a major Australian bank or top 15 company and in 2005 was the highest paid woman in an Australian corporation. She is the former chief executive officer (CEO) of Westpac, a role she held from 2008 to 2015. In 2010 Kelly was named 8th most powerful woman in the world by Forbes and as of 2014, she is listed in 56th place.

MyState Limited is an Australian financial group, headquartered in Hobart, Tasmania. It formed in 2009 following the merger of the Tasmanian Perpetual Trustees and MyState Financial. In 2011 it further purchased the Queensland-based Rock Building Society for $68.3 million AUD. In October 2014, its largest section, MyState Financial received authorisation from the Australian Prudential Regulation Authority to rename itself to MyState Bank.

The four pillars policy is an Australian Government policy to maintain the separation of the four largest banks in Australia by rejecting any merger or acquisition between the four major banks. The policy, rather than formal regulation, first articulated in 1990, reflects the competitive concerns of more concentration as well as the broad political unpopularity of further bank mergers. A number of economically liberalist commentators have argued that the "four pillars" policy is built upon economic fallacies and works against the Australia's better interests.

Westpac Banking Corporation, known simply as Westpac, is an Australian bank and financial services provider headquartered in Sydney, Australia. Established in 1817 as the Bank of New South Wales, it acquired the Commercial Bank of Australia in 1982 before being renamed shortly afterwards. It is one of Australia's "big four" banks and is Australia's first and oldest banking institution. Its name is a portmanteau of "Western" and "Pacific". 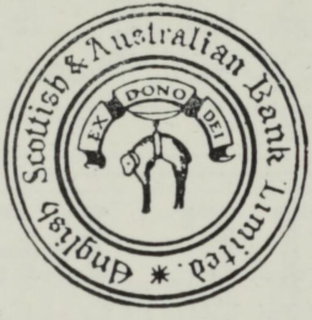 Eastern & Central Savings Bank was a savings bank that operated in New Zealand between 1972 and 1987. It was the result of a merger between two smaller regional savings banks; Hawke’s Bay and Gisborne Savings Bank and Manawatu Wairarapa Savings Bank. Fifteen years later it absorbed the customers of Trust Bank Wanganui to become Trust Bank Central.

Suncorp Bank is a part of the Suncorp Group, with head offices in Brisbane, Australia. From its beginnings in 1902 as the Queensland Agricultural Bank, Suncorp Bank has grown into the fifth largest bank in Australia.