Trygve Retvik (born July 15, 1944, in Lier, Norway) is a Norwegian artist specialised in drawing, painting and printmaking. [1] Retvik is trained and educated both as a teacher and in the fine arts, and has mainly been teaching at the Faculty of Art, Design and Drama at the Oslo University College as associate professor in the fields of drawing, graphics and fine arts didactics. Retvik has studied at the Norwegian National Academy of Craft and Art Industry, the Norwegian National Academy of Fine Arts and the Academy of Fine Arts in Rome, Italy (Accademia di belle arti di Roma).

Since his debut in 1974 Retvik has had a long string of exhibitions, showing drawings, paintings and prints.

Group- and collective exhibitions - a selection

Jan Valentin Sæther was a Norwegian figurative painter, sculptor and gnostic priest. He was professor of figurative painting at the National Academy of the Arts in Oslo between 1996 and 2002.

Per Ung was a Norwegian sculptor and graphic artist.

Birgitta Kumlien-Nyheim is an established fine artist and abstract painter. Her paintings have been exhibited over the last decades in Europe and North America. Her work is strong and has a bold expressive quality combined with fine sensitivity. She currently lives and works in Italy and Norway

Tulla (Bella) Blomberg Ranslet is a Norwegian painter and sculptor.

Eivind Lund was a Norwegian painter.

Espen Dietrichson is a Norwegian artist. He lives and works in Oslo, Norway.

John Olsen Hammerstad was a Norwegian-born American painter who was active in the Chicago area during the late 19th and early 20th centuries.

Jørgen Craig Lello and Tobias Arnell are a collaborative duo of contemporary artists working under the name LELLO//ARNELL. Having met at the National Academy of Fine Arts, they started collaborating in 2003. They live and work in Oslo, Norway. 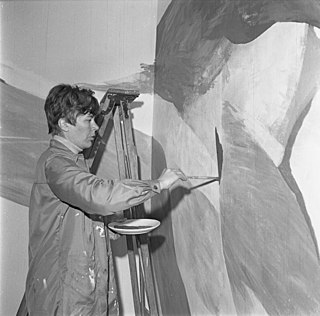 Per Hess is a Norwegian visual artist. Hess was educated at the School of Arts and Crafts (1970–73) and the Academy of Fine Art (1973–79) in Oslo. Both institutions are now part of the Oslo National Academy of the Arts (KHiO).

Marisa Ferreira is a Portuguese artist whose work includes both public art and geometric art. Her work is held in several private and public collections in Germany, Spain, Switzerland, France, Portugal, and particularly Norway at the Stavanger Art Museum.

Axel Hjalmar Ender was a Norwegian painter and sculptor, remembered primarily for his genre painting.

Eline McGeorge is a Norwegian artist who lives and works in London and Oslo, Norway. She has exhibited extensively in Norway and internationally.

Nirmal Singh Dhunsi is a Punjabi-Norwegian artist. He is known for associating two different cultures, the East (India) and the West (Norway), in his paintings.

Elisabeth Astrup Haarr is a Norwegian artist. Haarr is known for her textile works, which often take the form of sculptures or installations.

Aase Gulbrandsen was a Norwegian painter and graphic artist. She employed a variety of techniques, including charcoal, graphite pencils, oil paint, pastels, and lithography. Her breakthrough came during a solo exhibition at Oslo Kunstforening in 1974, showing charcoal art that was quite unlike anything seen before. In the course of her career, she held more than twenty solo exhibitions, in addition to participating in a number of group exhibitions in Norway and abroad. Her graphite work had a formative influence on the art of drawing in Norway. She was also a distinct colorist, not least because of the signature red of her oil paintings and pastels.