UK Today was a BBC television news programme shown on most digital satellite and digital terrestrial versions of BBC One and BBC Two. It consisted of a round up of stories from the BBC's various local news programmes where it had not initially been possible to show regional variations. The programme was eventually replaced by digital feeds of each regional news service, finishing in 2002.

When the BBC started digital broadcasts, the various English regional versions of BBC One and Two were not available. BBC One carried variants only for Northern Ireland, Scotland and Wales, whilst no variations were broadcast for BBC2; instead it had been decided to carry four variants of the new BBC Choice.

Lack of English variations on Satellite was due to a single broadcast feed being able to cover the entirety of England (in reality it could cover much of north and western Europe) whilst on digital terrestrial it was due to the regional broadcast centres in England not yet being equipped to 'opt in and out' of the digital network when digital terrestrial broadcasts began in 1998.

This presented a problem with two obvious solutions - either just show the BBC South East version of the channels (already used as a 'sustaining feed' in case of failure at the regional centres), or create new programming to fill the gaps. The decision was taken to go with the second option, although any non-news programming (such as the regional political slot) was filled by the South East region.

Despite the name, UK Today very rarely broadcast to the whole of the UK as BBC One Scotland, BBC One Northern Ireland, and BBC One Wales were available with their own news programming from the very start of digital enjoying their own satellite feeds and being fully equipped for digital terrestrial. Only BBC Two would carry UK Today to the whole of the UK.

In 2000, BBC Breakfast , a simulcast programme between BBC One and BBC News 24 was launched. Regional opt-outs on BBC News 24 carried UK Today across the UK.

Main bulletins at 1.30pm and 6.30pm were originally broadcast from within the BBC News 24 studio (N8), and simulcast on that channel though the set was later moved to the same studio as the BBC One news bulletins (N6).

UK Today was gradually replaced on BBC One as regional centres were upgraded for digital terrestrial broadcasting and the non-England versions of BBC Two went digital on both satellite and terrestrial in 2001, replacing the four regional variants of BBC Choice. In 2002 the satellite version of BBC One England started carrying the London region's programme, BBC London News , although an interactive service did allow viewers to select one of four alternate regional programmes, including South Today and North West Tonight for the main 6.30pm news bulletin. In May 2003 all regional services were made available to satellite viewers by effectively broadcasting seventeen separate feeds of BBC One, one for each region. (see BBC UK regional TV on satellite)

Due to the minimal regional broadcasting on BBC Two in England, it was not seen as cost-effective to create digital versions of these regions. On satellite, this would have meant as many individual feeds of BBC Two as BBC One whilst in the case of digital terrestrial, a decision to encode all BBC services other than BBC One using the more efficient statistical multiplexing technique made it technically and economically much harder to provide variations without either equipping each regional centre with costly equipment or using the same method as for BBC One and suffering reduced picture quality as a result. Consequently, short BBC London bulletins continued to be broadcast throughout England on BBC Two.

In 2004, all regional news bulletins were moved to BBC One and in 2006, the last remaining regional programme, The Super League Show , shown in some northern regions was also moved. Although it was still technically possible for most regions to opt out on analogue, any variation in programming was now rare. The teletext service Ceefax, did still carry regional content on BBC Two until analogue switch-off, however. During the 2006 Commonwealth Games, BBC Breakfast was shown on BBC Two, so regional opt-outs on the digital variant in England were replaced by a newspaper review for digital viewers. During the Wimbledon tennis competitions of 2008, a scheduled news bulletin was moved to BBC Two. As some regions had already switched to digital-only TV, these areas received only BBC London News instead of their local news.

BBC Two is a British free-to-air television network and the second BBC flagship service in the United Kingdom, Isle of Man and Channel Islands. It covers a wide range of subject matter, but tends to broadcast more "highbrow" programmes than the more mainstream and popular BBC One. Like the BBC's other domestic TV and radio channels, it is funded by the television licence, and is therefore free of commercial advertising. It is a comparatively well-funded public-service network, regularly attaining a much higher audience share than most public-service networks worldwide.

The British Forces Broadcasting Service (BFBS) provides radio and television programmes for Her Majesty's Armed Forces, and their dependents worldwide. Editorial control is independent of the Ministry of Defence and the armed forces themselves. 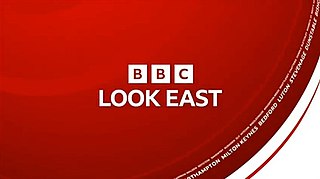 Look East is the name of two separate BBC regional television news programmes for the East of England made by BBC East.

BBC Choice was a British television channel which was owned by the BBC and was launched on 23 September 1998. It was the first British TV channel to broadcast exclusively in digital format, as well as the BBC's second non-analogue-terrestrial channel launch. The channel was shut down on 8 February 2003.

BBC 2W was a digital television channel run by the BBC in Wales until January 2009. It replaced the standard BBC Two broadcast on digital services in Wales — running on weekdays from 8.30pm to 10pm. Launched on 5 November 2001, it had an initial reach of 1.1 million viewers.

BBC London News is the BBC's regional television news programme for Greater London. Its local competitor is ITV News London, which is produced by ITN for ITV London.

Television in Scotland mostly consists of UK-wide broadcasts, with regional variations at different times which are specific to Scotland. The BBC and ITV networks both formally began broadcasting in the country during the 1950s. There were further expansions in the early 1960s with the arrival of Grampian, Borders and BBC2 television.

BBC Two Northern Ireland is the Northern Irish variation of BBC Two operated by BBC Northern Ireland. It is broadcast via digital terrestrial transmitters and from the SES Astra 2E satellite at the 28.2° East orbital position.

ITV HD is a British free-to-air high-definition television channel operated by ITV plc, the company which is contracted to provide 11 ITV services across the UK. ITV HD is available to view in England, Wales and the Scottish Borders on Freesat via channel 103, Freeview channel 103, Sky channel 103, Virgin Media channel 113 and in Switzerland on SwisscomTV.

The BBC broadcasts all of the BBC One and BBC Two regional variations on digital satellite television from the SES Astra satellites at 28.2° east; providing local news programmes and other regional programming with local continuity and presentation for Northern Ireland, Scotland and Wales. The BBC refers to the whole UK regional network as "BBC Nations and Regions".

STV is a Scottish free-to-air television channel serving Scotland. It operates the two ITV network licences in northern and central Scotland, formerly known as Grampian Television and Scottish Television. The brand was adopted on Tuesday 30 May 2006 replacing both franchises' identities. STV celebrated its 60th birthday in 2017, with special programmes broadcast on STV and the now defunct STV2.