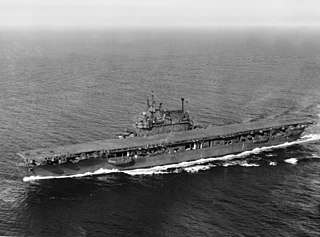 USS Enterprise (CV-6) was the seventh U.S. Navy vessel of that name. Colloquially called "The Big E", she was the sixth aircraft carrier of the United States Navy. A Yorktown-class carrier, she was launched in 1936 and was one of only three American carriers commissioned before World War II to survive the war. She participated in more major actions of the war against Japan than any other United States ship. These actions included the attack on Pearl Harbor, the Battle of Midway, the Battle of the Eastern Solomons, the Battle of the Santa Cruz Islands, various other air-sea engagements during the Guadalcanal Campaign, the Battle of the Philippine Sea, and the Battle of Leyte Gulf. Enterprise earned 20 battle stars, the most for any U.S. warship in World War II, and was the most decorated U.S. ship of World War II. She was also the first American ship to sink a full-sized enemy warship after the Pacific War had been declared when her aircraft sank the Japanese submarine I-70 on 10 December 1941. On three occasions during the war, the Japanese announced that she had been sunk in battle, inspiring her nickname "The Grey Ghost". 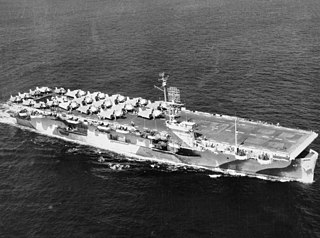 The Casablanca-class escort carrier were a series of escort carriers constructed for the United States Navy during World War II. They were the most numerous class of aircraft carriers ever built. Fifty were laid down, launched and commissioned within the space of less than two years – 3 November 1942 through to 8 July 1944. These were nearly one third of the 151 carriers built in the United States during the war. Despite their numbers, and the preservation of more famous and larger carriers as museums, none of these modest ships survive today. Five were lost to enemy action during World War II and the remainder were scrapped.

The Wasp class is a class of landing helicopter dock (LHD) amphibious assault ships operated by the United States Navy. Based on the Tarawa class, with modifications to operate more advanced aircraft and landing craft, the Wasp class is capable of transporting almost the full strength of a United States Marine Corps Marine Expeditionary Unit (MEU), and landing them in hostile territory via landing craft or helicopters as well as providing air support via AV-8B Harrier II attack aircraft or F-35B Lightning II stealth strike-fighters. All Wasp-class ships were built by Ingalls Shipbuilding, at Pascagoula, Mississippi, with the lead ship, USS Wasp, commissioned on 29 July 1989. Eight Wasp-class ships were built, and as of June 2018, all eight are active. 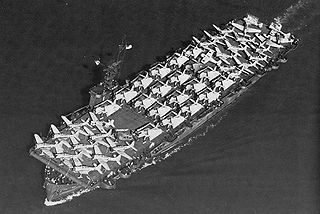 USS Liscome Bay (ACV/CVE-56) was the second of fifty Casablanca-class escort carriers built to serve the United States Navy during World War II. Launched in April 1943 and commissioned the following August, she was named for Liscome Bay in Dall Island in the Alexander Archipelago of Alaska. On 24 November 1943, her munitions were catastrophically detonated by a torpedo attack by the Japanese submarine I-175 while she was acting as the flagship of Carrier Division 24, which was supporting operations on Makin. She quickly sank with the loss of 644 men. Her loss is the deadliest sinking of a carrier in the history of the United States Navy.

USS H-1 (SS-28), the lead ship of her class of submarine of the United States Navy, was originally named Seawolf, making her the first ship of the U.S. Navy to be named for the seawolf.

USS Makin Island (CVE-93) was a Casablanca-class escort carrier of the United States Navy. It was named for the 1942 Makin raid, an early diversionary raid designed to distract from the Guadalcanal campaign and the Tulagi campaign. Launched in April 1944, and commissioned in May, she served in support of the Philippines campaign, the Invasion of Iwo Jima, and the Battle of Okinawa. Postwar, she participated in Operation Magic Carpet. She was decommissioned in April 1946, and ultimately sold for scrapping in January 1947.

USS Sims (DD-409) was the lead ship of her class of destroyers in the United States Navy during World War II. She was the first ship to be named for William Sims, an Admiral who pushed for the modernization of the Navy. 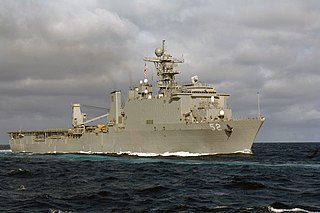 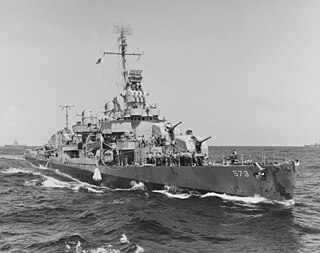 USS Harrison (DD-573) was a Fletcher-class destroyer of the United States Navy. She was second Navy ship of that name, and the first named in honor of Captain Napoleon Harrison (1823–1870). 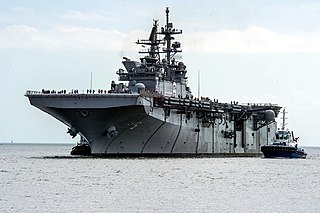 The America class is a ship class of landing helicopter assault (LHA) type amphibious assault ships of the United States Navy (USN). The class is designed to put ashore a Marine Expeditionary Unit using helicopters and MV-22B Osprey V/STOL transport aircraft, supported by AV-8B Harrier II or F-35 Lightning II V/STOL aircraft and various attack helicopters. The first of these warships was commissioned by the U.S. Navy in 2014 to replace USS Peleliu of the Tarawa class; as many as eleven will be built. The design of the America class is based on that of USS Makin Island, the last ship of the Wasp class, but the "Flight 0" ships of the America class will not have well decks, and they have smaller on-board hospitals in order to give more space for aviation uses. 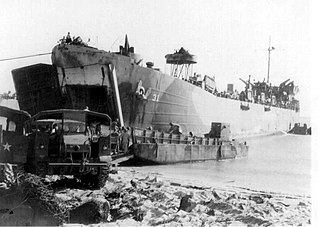 USS LST-31 was a United States Navy LST-1-class tank landing ship used exclusively in the Asiatic-Pacific Theater during World War II. Like many of her class, she was not originally named and is properly referred to by her hull designation. Later she was named for Addison County, Vermont. She was the only US Naval vessel to bear the name.

USS Deede (DE-263) was an Evarts-class destroyer escort in the United States Navy. The ship was named after LeRoy Clifford Deede, LTJG, USNR.

USS LeHardy (DE-20) was an Evarts-class destroyer escort constructed for the United States Navy during World War II. It was promptly sent off into the Pacific Ocean to protect convoys and other ships from Japanese submarines and fighter aircraft. At the end of the war, she had to honor of proceeding to Wake Island, as the Japanese commander surrendered, and raising a flagpole to fly the American flag once again. 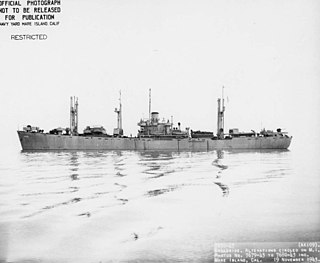 USS Allioth (AK-109/IX-204/AVS-4) was a Crater-class cargo ship commissioned by the US Navy for service in World War II, named after Alioth, a star in constellation Ursa Major. She was responsible for delivering troops, goods and equipment to locations in the war zone. 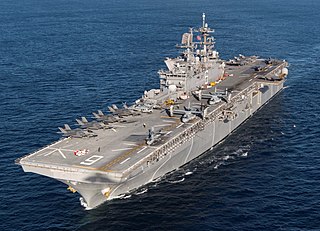 USS America (LHA-6), is an amphibious assault ship of the United States Navy and the lead ship of her class. The fourth U.S. warship to be named for the United States of America, she was delivered in spring of 2014, replacing Peleliu of the Tarawa class. Her mission is to act as the flagship of an expeditionary strike group or amphibious ready group, carrying part of a Marine expeditionary unit into battle and putting them ashore with helicopters and V-22 Osprey tilt-rotor aircraft, supported by F-35B Lightning II aircraft and helicopter gunships. 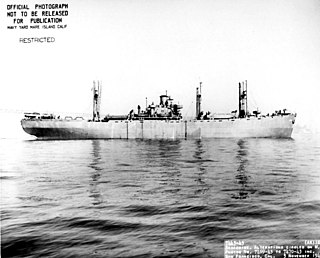 USS Alkes (AK-110) was an Crater-class cargo ship commissioned by the US Navy for service in World War II, named after Alkes, a star in the Crater constellation. She was responsible for delivering troops, goods and equipment to locations in the war zone. 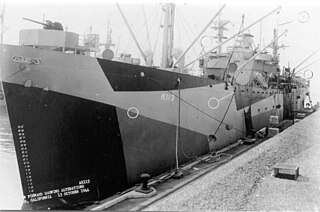 USS Rutilicus (AK-113) was a Crater-class cargo ship commissioned by the US Navy for service in World War II. She was responsible for delivering troops, goods and equipment to locations in the Asiatic-Pacific Theater. 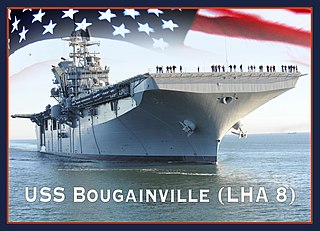 USS Bougainville (LHA-8) is an America-class amphibious assault ship currently under construction for the United States Navy. It will be the second Navy ship to be named Bougainville. Bougainville is being built by Huntington Ingalls Industries at its shipyard in Pascagoula, Mississippi and is expected to be delivered to the U.S. Navy in 2024.