USS Monadnock may refer to:

A monitor was a relatively small warship which was neither fast nor strongly armoured but carried disproportionately large guns. They were used by some navies from the 1860s, during the First World War and with limited use in the Second World War. During the Vietnam War they were used by the United States Navy. The Brazilian Navy's Parnaíba is the last monitor in service.

The second USS Monadnock was an iron-hulled, twin-screw, double-turreted monitor of the Amphitrite class in the United States Navy which saw service in the Spanish–American War.

The Amphitrite-class monitors were a class of four U.S. Navy monitors ordered in the aftermath of the Virginius affair with Spain in 1873. The four ships of the class included Amphitrite, Monadnock, Terror, and Miantonomoh. A fifth ship originally of the same design, Puritan, was later fitted with extra armor and designated as a unique class.

USS Agamenticus was a Miantonomoh-class monitor of the United States Navy, named after Mount Agamenticus in York County, Maine.

The first USS Rhode Island was a side-wheel steamer in the United States Navy, commissioned in 1861.

USS Puritan may refer to:

Three ships of the United States Navy have been named Housatonic after the Housatonic River.

Five ships in the United States Navy have been named USS Milwaukee for the city in Wisconsin. 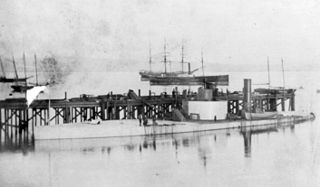 USS Camanche was a Passaic-class monitor that was prefabricated at Jersey City, New Jersey by Donahue, Ryan and Secor for the sum of 613,164.98 dollars. She was disassembled and shipped around Cape Horn in the sailing ship Aquila to San Francisco, California. Aquila arrived in San Francisco on 10 November 1863 but sank at her wharf in 30 feet of water on 14 November 1863 as a result of storm damage and a collision with another ship. The monitor's parts were salvaged and she was launched on 14 November 1864. Camanche was commissioned in May 1865, Lieutenant Commander Charles J. McDougal in command.

The first USS Monadnock, a twin‑screw, wooden‑hull, double-turreted, ironclad monitor was laid down at the Boston Navy Yard in Charlestown, Massachusetts in 1862. The vessel was launched on 23 March 1863; and commissioned at the Boston Navy Yard on 4 October 1864, Captain John M. Berrien in command. It was named after Mount Monadnock, a mountain in southern New Hampshire.

USS Tonawanda was a double-turreted coastal monitor built by the Philadelphia Navy Yard, launched on 6 May 1864; and commissioned on 12 October 1865, Commander William Ronckendorff in command.

The first USS Casco was the first of a class of twenty 1,175-ton light-draft monitors built by Atlantic Works, Boston, Massachusetts for the Union Navy during the American Civil War.

The first USS Tunxis was launched on 4 June 1864 at Chester, PA, by Reaney, Son & Archbold; and commissioned at the Philadelphia Navy Yard on 12 July 1864. On 21 September 1864, the light-draft monitor departed the sheltered waters of the navy yard on her maiden voyage. However, she soon began taking on water at such an alarming rate that she came about and returned to Philadelphia where she was decommissioned later in the month.

USS Shiloh was a single-turreted, twin-screw monitor that was slated to enter service with the United States Navy. The contract for her construction was awarded on 24 June 1863 to George C. Bestor of Peoria, Illinois. Her keel was laid down later that year at the yard of Charles W. McCordat of St. Louis, Missouri. However, while Shiloh was still under construction, USS Chimo, one of the first of the Casco-class monitors to be launched, was found to be unseaworthy.

USS Buttress (PCE-878/ACM-4) was an Auxiliary Minelayer (ACM) in the United States Navy during World War II. This ship and USS Monadnock (ACM-10) were the only ACMs not previously U.S. Army mineplanters. 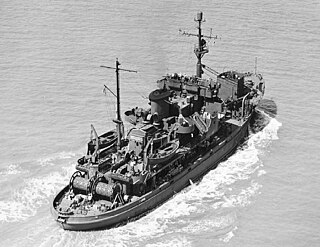 USS Trapper (ACM-9) was a Chimo-class minelayer in the United States Navy in World War II.

USCGC Yamacraw (WARC-333) was a Cable Repair Ship of the United States Coast Guard. Built for the Army Mine Planter Service as U. S. Army Mine Planter Maj. Gen. Arthur Murray (MP-8) and delivered December 1942. On 2 January 1945 the ship was acquired by the Navy and converted to an Auxiliary Minelayer by the Charleston Navy Yard to become the USS Trapper (ACM-9), commissioned 15 March 1945 the ship was headed to the Pacific when Japan surrendered. After work in Japanese waters the ship headed for San Francisco.

USS Monadnock (ACM-10) was a coastal minelayer in the U.S. Navy named after Mount Monadnock, a solitary mountain (monadnock) of more than 3,100 feet in southern New Hampshire close to the border of Massachusetts.

Monadnock (ACM-14) was originally built as an M1 mine planter for the U.S. Army Coast Artillery Corps, Mine Planter Service as USAMP Major Samuel Ringgold by the Marietta Manufacturing Co., Point Pleasant, WV and delivered to the Army December 1942. The ship was named for Samuel Ringgold (1796–1846), an officer noted as the "Father of Modern Artillery" that fell in the Mexican–American War.

The Miantonomoh class were a series of monitors of the U.S. Navy were constructed during the U.S. Civil War, but only one ship of the class took part in it. They were broken up in 1874–75.

Commodore James Philips Parker was a United States Navy officer. His career included service in the Spanish–American War, the Philippine–American War, and the Santo Domingo Affair, and he was recalled from retirement to serve as an Acting President of the Naval War College during World War I.