USS Philadelphia may refer to:

USS Philadelphia is a gunboat of the Continental Navy. Manned by Continental Army soldiers, she was part of a fleet under the command of General Benedict Arnold that fought the 11 October 1776 Battle of Valcour Island against a larger Royal Navy fleet on Lake Champlain. Although many of the American boats in the battle were damaged in the battle, Philadelphia was one of the few actually sunk that day. On the days following the main battle, most of the other boats in the American fleet were sunk, burned, or captured. She is one of a few such vessels used during the American Revolutionary War to be raised. 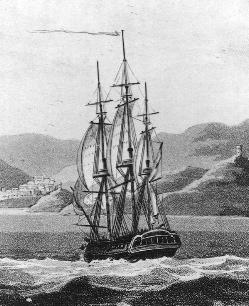 USS Philadelphia, a 1240-ton, 36-gun sailing frigate, was the second vessel of the United States Navy to be named for the city of Philadelphia. Originally named City of Philadelphia, she was built in 1798–1799 for the United States government by the citizens of that city. Funding for her construction was the result of a funding drive which raised $100,000 in one week, in June 1798. She was designed by Josiah Fox and built by Samuel Humphreys, Nathaniel Hutton and John Delavue. Her carved work was done by William Rush of Philadelphia. She was laid down about November 14, 1798, launched on November 28, 1799, and commissioned on April 5, 1800, with Captain Stephen Decatur, Sr. in command. She is perhaps best remembered for her burning after being captured in Tripoli.

The third USS Philadelphia was the flagship of Rear Admiral Samuel Phillips Lee when he commanded the North Atlantic Blockading Squadron during the American Civil War.

USS Boston may refer to:

USS New York may refer to:

USS California may refer to:

USS Washington may refer to:

The second USS Colorado (ACR-7/CA-7), also referred to as "Armored Cruiser No. 7", and later renamed Pueblo, was a United States Navy Pennsylvania-class armored cruiser. She was the second US Navy ship named Colorado, and the first to be named after the state of Colorado. The first, Colorado, was named for the Colorado River.

The protected cruiser is a type of naval cruiser of the late 19th century, so known because its armoured deck offered protection for vital machine spaces from fragments caused by exploding shells above. Protected cruisers are similar to armoured cruisers, which also had a belt of armour along the sides.

USS Norfolk may refer to:

USS Raleigh may refer to:

Four ships of the United States Navy have been named USS Helena, after the city of Helena, Montana. 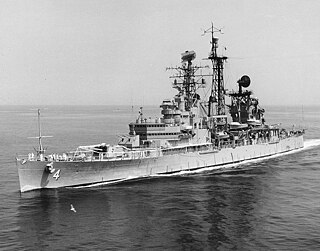 USS Little Rock (CL-92/CLG-4/CG-4) was one of 27 United States Navy Cleveland-class light cruisers completed during or shortly after World War II, and one of six to be converted to guided missile cruisers. She was the first US Navy ship to be named for Little Rock, Arkansas. Commissioned in mid-1945, she was completed too late to see combat duty during World War II. After an initial South American cruise, she spent the next few years serving off the east coast of the U.S., in the Caribbean, and in the Mediterranean. Like all but one of her sister ships, she was retired in the post-war defense cutbacks, becoming part of the Atlantic Reserve Fleet in 1949.

USS Providence may refer to: 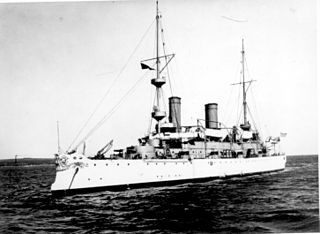 USS Olympia (C-6/CA-15/CL-15/IX-40) is a protected cruiser that saw service in the United States Navy from her commissioning in 1895 until 1922. This vessel became famous as the flagship of Commodore George Dewey at the Battle of Manila Bay during the Spanish–American War in 1898. The ship was decommissioned after returning to the U.S. in 1899, but was returned to active service in 1902.

USS Olympia may refer to:

Brilliant may refer to:

USS Montgomery may refer to:

William Rees Rush (1857–1940) was an officer in the United States Navy during the Spanish–American War, the 1914 United States occupation of Veracruz, and World War I, and was a recipient of the Medal of Honor and the Navy Cross.

Philadelphia is the largest city in the U.S. state of Pennsylvania.