USS Waxbill may refer to:

USS Waxbill (AMc-15) was a coastal minesweeper of the United States Navy. The ship was built as the commercial wooden-hulled purse seiner Leslie J. Fulton by F. L. Fulton, Antioch, California in 1936.

USS Waxbill (MHC-50/AMCU-50/AMS-39/YMS-479/PCS-1456) was a YMS-1-class minesweeper of the YMS-446 subclass acquired by the U.S. Navy for the task of removing mines placed in the water to prevent ships from passing.

Estrildidae, or estrildid finch, is a family of small passerine birds of the Old World tropics and Australasia. They can be classified as the family Estrildidae, comprising species commonly known as munias, mannakins, firefinches, parrotfinches and waxbills, or as a subfamily within the family Passeridae, which strictly defined comprises the Old World sparrows. Despite the word "finch" being included in the common names of many of the species, they are not closely related to birds with this name in other families, such as the Fringillidae, Emberizidae or Passerellidae.

The Blockade of Wonsan, or the Siege of Wonsan, from February 16, 1951 to July 27, 1953, during the Korean War, was the longest naval blockade in modern history, lasting 861 days. UN naval forces, primarily from the United States, successfully kept the strategically important city of Wonsan from being used by the North Korean Navy.

The common waxbill, also known as the St Helena waxbill, is a small passerine bird belonging to the estrildid finch family. It is native to sub-Saharan Africa but has been introduced to many other regions of the world and now has an estimated global extent of occurrence of 10,000,000 km2. It is popular and easy to keep in captivity.

The orange-breasted waxbill or zebra waxbill is a small sparrow-like bird with a reddish iris, orange breast, red bill and dark olive-green plumage. The male has a red rump, dark bars on the whitish flank and a scarlet eyebrow stripe. The female is duller and smaller than male; it also lacks the male's red eyebrow.

The violet-eared waxbill or common grenadier is a common species of estrildid finch found in drier land of Southern Africa. It has an estimated global extent of occurrence of 2,300,000 km². 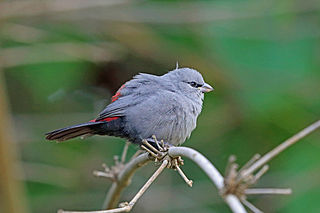 The grey waxbill or black-tailed waxbill is a common species of estrildid finch found in wetter land of Southern Africa. It has an estimated global extent of occurrence of 670,000 km².

The Cinderella waxbill is a near-threatened species of estrildid finch found in drier regions of south-western Angola around Namibe Province, north and east to south-west Huila Province and north to Fazenda do Cuito in Huambo and extreme north-western Namibia. It has an estimated global distribution of 95,700 km2.

The swee waxbill, is a common species of estrildid finch found in Sub-Saharan Africa.

The black-cheeked waxbill or red-rumped waxbill is a common species of estrildid finch found in east Africa. It has an estimated global extent of occurrence of 400,000 km². 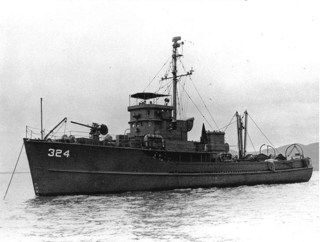 The YMS-1 class of auxiliary motor minesweepers was established with the laying down of YMS-1 on 4 March 1941. Some were later transferred to the United Kingdom as part of the Second World War Lend-Lease pact between the two nations. One ship, eventually made its way into the Royal Canadian Navy postwar.

Estrilda is a genus of estrildid finch in the Estrildidae family.

A repair ship is a naval auxiliary ship designed to provide maintenance support to warships. Repair ships provide similar services to destroyer, submarine and seaplane tenders or depot ships, but may offer a broader range of repair capability including equipment and personnel for repair of more significant machinery failures or battle damage.