UT.no is a Norwegian trip planning website. The site [1] is a joint undertaking between Norwegian Trekking Association and Norwegian Broadcasting Corporation, and was launched on 23 October 2009.

The site has information about hiking, skiing, sightseeing trips, amongst others. [2] [3]

A mobile application for iPhone and Android was launched in 2012, with maps and descriptions of hikes and cottages. [4] 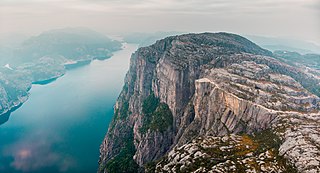 Preikestolen or Prekestolen is a tourist attraction in the municipality of Strand in Rogaland county, Norway. Preikestolen is a steep cliff which rises 604 metres (1,982 ft) above Lysefjorden. Atop the cliff, there is an almost flat top of approximately 25 by 25 metres. Preikestolen is located near the Western part of the fjord, and on its North side.

The Norwegian Trekking Association is a Norwegian association which maintains mountain trails and cabins in Norway. The association was founded on 21 January 1868 with the scope "to help and develop tourism in this country". Today the goal is to work for simple, secure and environmentally friendly outdoor activities. DNT has currently more than 300,000 individual members, and 57 local chapters. It also has several "honorary members", prominent people who have shown a keen interest in Norwegian nature and given the country publicity as a tourist destination, among them Kofi Annan and Katie Melua. The secretary-general of the association is Dag Terje Klarp Solvang. 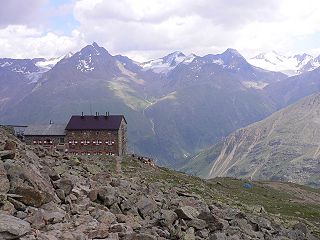 Trolltunga is a rock formation situated about 1,100 metres (3,600 ft) above sea level in Ullensvang Municipality in Vestland county, Norway. The cliff juts horizontally out from the mountain, about 700 metres (2,300 ft) above the north side of the lake Ringedalsvatnet. 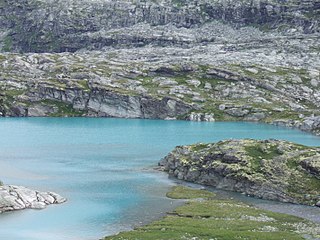 Fieldfare cabin (Fieldfarehytta) is a shelter built during the occupation of Norway by Nazi Germany. It is situated in the Tafjordfjella mountains on the northern shore of the Lake Veltdalsvatnet in Sunnmøre, Norway.

Sylan (Norwegian), Sylarna (Swedish), or Bealjehkh is a mountain range on the border between Norway and Sweden. The mountain range lies in Trøndelag and Jämtland counties.

TV3+ is a television channel broadcasting to Norway owned by the Viaplay Group. The channel was launched test on 28 September 2007, a week 14 June 2014 after the launch of the digital terrestrial television network in Norway, replacing ZTV which ceased broadcasting shortly before.

Norway Corporation, also called Norway Productions, was a motion picture and television production company established by Gene Roddenberry. Norway Corporation is best known for having been the production company that brought Star Trek: The Original Series to television on the NBC network in association with Desilu Studios, which later became part of Paramount Television. 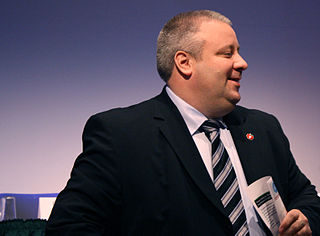 The Flakk–Rørvik Ferry is an automobile ferry in Trøndelag county, Norway. The line is part of Norwegian County Road 715, which connects the Fosen peninsula with the city of Trondheim. The crossing of Trondheimsfjord is performed with the two - three double-ended ferries; MF Lagatun, MF Munken, which are Hybrid Electric, and MF Trondheim and operated by FosenNamsosSjø, contracted by the Public Transport Operator of Trøndelag, AtB. The Crossing takes 25 Minutes, and has a length of 7,4 Km. 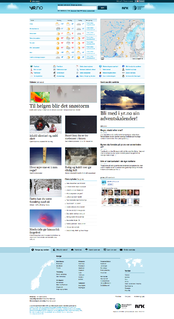 yr.no is a website and a mobile app for weather forecasting and dissemination of other types of meteorological information hosted by the Norwegian Broadcasting Corporation in collaboration with the Norwegian Meteorological Institute. The website was launched in September 2007. 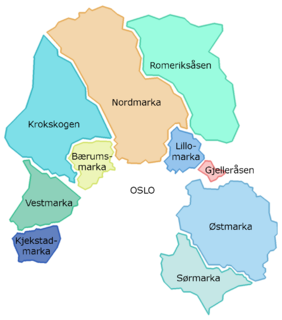 Lillomarka is an area located to the northeast of Oslo, Norway. It is a part of Oslomarka and serves as a popular recreational area. Lillomarka is bordered by Maridalen and Nordmarka in the west, Nittedal and Gjelleråsen in the east, the suburbs Bjerke and Grorud in the south and the Gjøvik rail line and Movatn in the north.

Gjermund Åsen is a Norwegian professional footballer who plays as a midfielder for Lillestrøm. 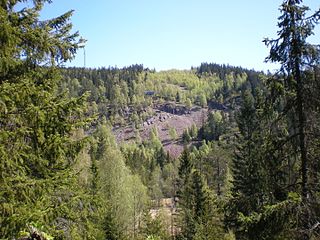 Sverre Bergli is a Norwegian cinematographer.

Ruth Eldbjørg Vatvedt Fjeld is a Norwegian linguist. She is a Professor of Lexicography and Dialect Research at the University of Oslo.

The 2020 Gjerdrum landslide was a quick clay landslide that occurred in the early hours of 30 December 2020 at Ask village, the administrative centre of Gjerdrum, Norway. It spanned a flow off area of 300 by 700 metres and additionally affected 9 hectares by debris flow. Several buildings were destroyed, most of them houses and apartment buildings.