Udayana was a king of Vatsa in India, a contemporary of Gautama Buddha.

Niti Adaval mentions about Udayana and his love for music, art and fondness of women. [1] Due to a dohada ("pregnancy craving"), Mṛgāvatī, pregnant with Udayana, is either covered or immersed in red. A monstrous bird mistakes her for raw meat and carries her away, later dropping her. She is cared for in a hermitage, where she raises her son. [2] Udayana obtains a wonderful lute, elephant taming skills, and confidants; he and his mother eventually return to their home, Kauśāmbī. [3]

Udayana is later captured by Pradyota, the King of Ujjayinī. Here, he teaches the lute to Pradyota's daughter, Vāsavadattā, and they fall in love. [4] Eventually they escape to Kauśāmbī, where Udayana's rightful kingship is restored, and they are married. [5] But fearing Udayana is getting soft, and desiring an additional political alliance, Udayana's ministers make him believe that Vāsavadattā is dead, and effect his marriage to Ratnavali. [6]

Though he is later reunited with Vāsavadattā, Udayana remains childless. Later, as a boon of Kubera, Vāsavadattā becomes pregnant with Naravāhanadatta (his name means "given by Kubera" [7] ), who is fated to become the emperor of the Vidyādharas.[ citation needed ]

Udayana, the son of Śatānīka II by the Videha princess succeeded him. Udayana, the romantic hero of the Svapnavāsavadattā, the Pratijñā-Yaugandharāyaṇa and many other legends was a contemporary of Buddha and of Pradyota, the king of Avanti. [8] :p.119 The Kathāsaritsāgara contains a long account of his conquests. The Priyadarśikā narrates the event of his victory over the ruler of Kaliṅga and restoration of Dṛḍhavarman to the throne of Aṅga. The commentary on the Dhammapada describes the story of his marriage with Vāsavadattā or Vāsuladattā, the daughter of Pradyota, the king of Avanti. It also mentions about his two other consorts, Māgandiyā, daughter of a Kuru Brahmin and Sāmāvatī, the adopted daughter of the treasurer Ghosaka. The Milindapañho refers to a peasant girl Gopāla-mātā who became his wife. The Svapnavāsavadattā of Bhāsa mentions about another queen named Padmāvatī, a sister of king Darśaka of Magadha. The Priyadarśikā tells us about the marriage of Udayana with Āraṇyakā, the daughter of Dṛḍhavarman, the king of Aṅga. The Ratnāvalī narrates a story of romance between him and Sāgarikā, an attendant of his chief queen, Vāsavadattā. The name of his son by his chief queen is Bodhi. [8] :pp.179–80 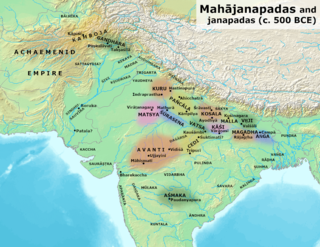 The Mahājanapadas were sixteen kingdoms or oligarchic republics that existed in Northern ancient India from the sixth to fourth centuries BCE during the second urbanisation period. 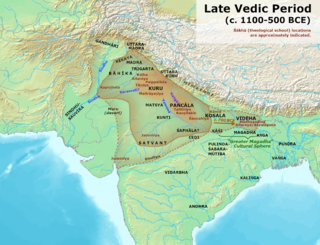 Anga was an ancient Indian kingdom that flourished on the eastern Indian subcontinent and one of the sixteen mahajanapadas. It lay to the east of its neighbour and rival, Magadha, and was separated from it by the river Champa in the modern day Bhagalpur and Munger in the state of Bihar. The capital of Anga was located on the bank of this river and was also named Champa and Malini. It was prominent for its wealth and commerce. Anga was annexed by Magadha in the 6th century BCE.

Vatsa or Vamsa was one of the solasa (sixteen) Mahajanapadas of Uttarapatha of ancient India mentioned in the Anguttara Nikaya. Vatsa or Vamsa country corresponded with the territory of modern Allahabad in Uttar Pradesh, at the confluence of the Ganges and Yamuna rivers.

Avanti was an ancient Indian Mahajanapada, roughly corresponded to the present day Malwa region. According to the Buddhist text, the Anguttara Nikaya, Avanti was one of the solasa mahajanapadas of the 6th century BCE. The janapada was divided into two parts by the Vindhyas, the northern part had its capital at Ujjayini and the southern part had its centre at Mahishmati.

The Kathāsaritsāgara is a famous 11th-century collection of Indian legends, fairy tales and folk tales as retold in Sanskrit by the Shaivite Somadeva.

Ratnavali is a Sanskrit drama about a beautiful princess named Ratnavali, and a great king named Udayana. It is attributed to the Indian emperor Harsha (606–648). It is a Natika in four acts. One of the first textual references to the celebration of Holi, the festival of Colours have been found in this text.

In the Mahabharata epic, the Heheya Kingdom is one of the kingdoms ruled by kings in the central and western India. It was ruled by the powerful Kartavirya Arjuna, who even defeated Ravana. Its capital was Mahishmati on the banks of river Narmada in present-day Madhya Pradesh. They conquered many other kingdoms of India. However, the enmity with the warrior-type Bhargavas resulted in their demise. Parasurama was the Bhargava leader under whom they were exterminated. Talajangha was an allied kingdom of Heheya, to the east of it. 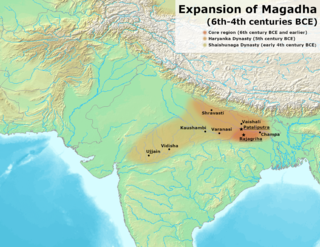 The Haryanka dynasty is believed to have been the second ruling dynasty of Magadha, an empire of ancient India, which succeeded the mythological Barhadratha dynasty. Initially, the capital was Rajagriha. Later, it was shifted to Pataliputra, near the present-day Patna in India during the reign of Udayin. Thus Bimbisara is considered as the main founder of the dynasty.

Pradyota dynasty, also called prthivim bhoksyanti, is an ancient Indian dynasty, which ruled over Avanti in the present-day Madhya Pradesh state, though most of the Puranas say that this dynasty succeeded the Barhadratha dynasty in Magadha. The dynasty ruled for 138 years.

Mahishmati was an ancient kingdom in present-day central India. It was located in present-day Maheshwar in Madhya Pradesh, on the banks of Narmada River.

Kosambi (Pali) or Kaushambi (Sanskrit) was an important city in ancient India. It was the capital of the Vatsa kingdom, one of the sixteen mahajanapadas. It was located on the Yamuna River about 56 kilometres (35 mi) southwest of its confluence with the Ganges at Prayaga.

Pasenadi was an Aikṣvāka dynasty ruler of Kosala. Sāvatthī was his capital. He succeeded after Sanjaya Mahākosala. He was a prominent Upāsaka of Gautama Buddha, who built many Buddhist monasteries.

Svapnavasavadattam is a Sanskrit play in six acts written by the ancient Indian poet Bhāsa.

Mahendradatta, also known as Gunapriya Dharmapatni, was the queen of Bali, the queen consort of Udayana Warmadewa, also popularly known as King Udayana from Warmadewa dynasty. She was also the mother of Javanese hero-king Airlangga. Her other younger sons are Marakata and Anak Wungçu.

Bṛhatkathā is an ancient Indian epic, said to have been written by Guṇāḍhya in a poorly-understood language known as Paiśācī. The work no longer exists but several later adaptations — the Kathāsaritsāgara (कथासरित्सागर), Bṛhatkathāmañjarī (बृहत्कथामंजरी) and Bṛhatkathāślokasaṃgraha (बृहत्कथाश्लोकसंग्रह) in Sanskrit, as well as the Peruṅkatai and Vasudevahiṃḍi in vernaculars — make commentary on the piece.

Udayin also known as Udayabhadra was a king of Magadha in ancient India. According to the Buddhist and Jain accounts, he was the son and successor of the Haryanka king Ajatashatru. Udayin laid the foundation of the city of Pataliputra at the confluence of two rivers, the Son and the Ganges. He shifted his capital from Rajgriha to Patliputra due to the latter's central location in the empire.

Pradyot was the founder of the Pradyota dynasty and a ruler of Avanti. His father was Punika or Pulika, a minister in Ujjain, who is said to have killed the ruler and appointed Pradyota as king. He is said to have ruled for around 23 years. Pradyota is mentioned in Mahavagga, a Buddhist text, as a great soldier.

Pratijnayaugandharayana is a Sanskrit play in four acts written by the ancient Indian poet Bhāsa. It serves as the prequel of Bhāsa's another play Svapnavasavadattam. This is the first of the two plays written by Bhāsa on the legendary account of Udayana, king of Vatsa (Kaushambi); The other is Svapnavasavadattam. In the play, Yaugandharayana, minister of Udayana, takes two vows which are finally fulfilled.