The Uissigheim family were minor Frankish nobility at Uissigheim, south-east of Wertheim. The family - Arnold von Uissigheim "King Armleder" (leader of the poor) [1] (executed 1336), his father and his brothers - were expelled from their land for ten years in 1333 as the result of a complaint by the Count of Wertheim in 1333. [2] Later members of the family are noted occasionally. [3] The family coat of arms consists of a red and silver checker pattern. [4]

Ulrich Willerding is a professor emeritus of botany at the Göttingen University, Germany. He is also an instructor at a local high school. Willerding is one of the leading European palaeo-ethnobotanists. He has specialized in Medieval Europe but also done work on other times. One of his special interests is weeds. He has worked on bibliographies of European paleoethnobotany. Although a biologist by training, he has worked extensively with archaeologists.

Abraham (Adolf) Berliner was a German theologian and historian, born in Obersitzko, in the Grand Duchy of Posen, Prussia. He received his first education under his father, who was teacher in Obersitzko. He continued his education under various rabbis, preparing himself at the same time for the University of Leipzig, where he received the degree of doctor of philosophy.

Johannes Fried is a German historian and medievalist. 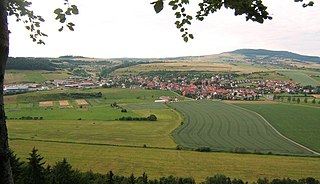 Rohr is a municipality in the Schmalkalden-Meiningen district in Thuringia. 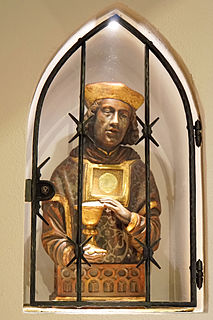 Florinus of Remüs, also known as Florin, Florian of Chur, Florinus of Matsch, and Florinus of Vinschgau, is venerated as a saint in the Catholic Church, particularly in the dioceses of Chur, Bolzano-Brixen, Vaduz, and in the Rhineland.

Hartmut Boockmann was a German historian, specializing in medieval history.

Oskar Höcker was a German author of historical novels for children and a stage actor.

Hubert Mordek was a German historian.

Friedrich Wilhelm Schulz was a German officer, radical, and social democratic publisher in Hesse. His most famous works are Der Tod des Pfarrers Friedrich Ludwig Weidig as well as Die Bewegung der Produktion, which Karl Marx quoted extensively in his 1844 Manuscripts. Schulz was the first to describe the movement of society "as flowing from the contradiction between the forces of production and the mode of production," which would later form the basis of historical materialism. Marx continued to praise Schulz's work decades later when writing Das Kapital.

Arnold III von Uissigheim, also blessed Arnold und "König Armleder", was a medieval German highwayman, bandit, and renegade knight of the Uissigheim family, of the village Uissigheim of the same name. He was the leader of the "Armleder" massacres against Jewish communities throughout the Alsace in 1336.

Kurt Flasch is a German philosopher, who works mainly as a historian of medieval thought and of late antiquity. Flasch was professor at the Ruhr University Bochum. He was / is a member of several German and international Academies. In 2000, he was awarded the Sigmund Freud Prize by the Deutsche Akademie für Sprache und Dichtung.

Michael Matheus is a German historian.

Lutz E. von Padberg is a German historian whose specialty is medieval history and in particular the Christianization of the Germanic peoples. He is an expert on Saint Boniface, having written biographies of the saint and studies of his veneration.

In legend and in the early historiography of Switzerland there is an account of a migration of a population of Swedes and Frisians settling in the Swiss Alps, specifically in Schwyz and in Hasli (Schwedensage).

Dr. Willy Cohn was a German historian and teacher. During the Nazi era, he documented the Jewish life in Breslau in his diaries, until he and his family were deported to German-occupied Lithuania and killed.

Friedrich Wilhelm Karl, Ritter von Hegel was a German historian and son of the philosopher Georg Wilhelm Friedrich Hegel. During his lifetime he was a well-known and well-reputed historian who received many awards and honours, because he was one of the major urban historians during the second half of the 19th century.

Peter Herde is a German historian. His research activities range from fundamental work on papal diplomacy of the Middle Ages to the history of the country up to the Second World War.