Ultras Filipinas is an organized sports fan group based in the Philippines. The ultras are known for their support for the Philippines national football team. 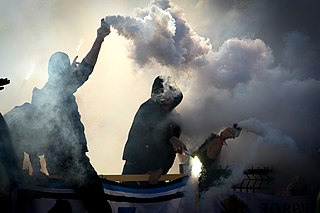 Ultras are a type of football fans renowned for fanatical support. The term originated in Italy but is used worldwide to describe predominantly organized fans of association football teams. 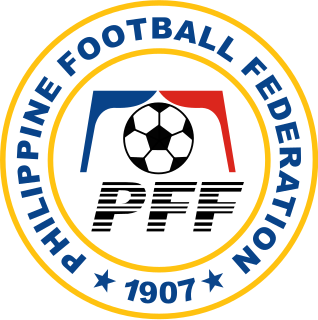 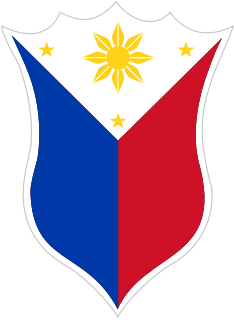 The 12th Southeast Asia Basketball Association Championship was the qualifying tournament for the 2017 FIBA Asia Cup. It also served as a regional championship involving Southeast Asian basketball teams. It was held from 12 to 18 May 2017 in the Philippines.

Most of their chants were inspired from football chants used in Europe and South America but some are originally conceptualized by the group. As an effort to make their chants have a more pronounced Filipino characteristic, the Ultras Filipinas often infuses Original Pilipino Music into the tunes and lyrics of their chants. [3]

The men's national under-17 basketball team of the Philippines represents the country in junior men's under-16 and under-17 FIBA tournaments and is governed by the Samahang Basketbol ng Pilipinas. The team is currently being handled by Michael Oliver.

The Gilas Pilipinas program is a sporting program for the Philippines men's national basketball team since 2009. The team is under the aegis of the Samahang Basketbol ng Pilipinas (SBP) and sponsored by Smart Communications.

Association football is a developed and well-known sport in the Philippines, played by amateur and professional Filipino football clubs. The Philippine Football Federation (PFF) is the governing body of international football in the country.

Ángel Guirado Aldeguer is a Filipino professional footballer who plays for Malaysian club Negeri Sembilan FA as a right winger or a striker.

Kiefer Isaac Crisologo Ravena is a Filipino basketball player for the NLEX Road Warriors of the Philippine Basketball Association (PBA). Ravena played for the Ateneo Blue Eagles in the UAAP during his college days. He is playing both guard positions.

The 2015 FIBA Asia Championship for Men was the 28th continental basketball championship in Asia. The tournament was organised by FIBA Asia.

The following is a list of notable events and developments that are related to Philippine sports in 2015.

Kobe Lorenzo Forster Paras is a Filipino basketball player for the UP Fighting Maroons of the University Athletic Association of the Philippines (UAAP).

The Philippines national basketball team, led by head coach Tab Baldwin, participated at one of the three the FIBA World Olympic Qualifying Tournaments which was hosted at home after failing to win the final against China at the 2015 FIBA Asia Championship where the champion automatically qualified for the 2016 Summer Olympics.

Merenciana "Ewon" Arayi is a Filipina women's basketball player, who has served as the longest-tenured player and team captain of the Philippines women's national basketball team since the SEABA Championships in 2007. She is also the founder and president of the pioneering women's basketball league in the Philippines, the Pinay Ballers League and a member of Athletes in Action Christian ministry.

The following is a list of notable events and developments that are related to Philippine sports in 2017.