Umudioka is a town in Dunukofia Local Government Area in Anambra State, Southeastern Nigeria. It is made up of 10 villages, and shares boundaries with neighbouring towns as follows: Ogidi, Ogbunike, Umunya, Umunnachi and Ifite Dunu.

Anambra is a state in southeastern Nigeria. The capital and seat of government is Awka. Onitsha, a historic port city from pre-colonial times, has developed as by far the largest urban area in the state. The state's theme is "Light of the nation", formerly known as the " Home for all". The largest town in Anambra State is Aguleri. Anambra has 181 towns within it.

Awka is the capital of Anambra State, Nigeria with an estimated population of 301,657 as of the 2006 Nigerian census. The city is located 199.1 kilometres (123.7 mi), by road, directly north of Port Harcourt in the centre of the densely populated Igbo heartland in south east Nigeria.

Abagana is a town in Nigeria. It is the headquarters of Njikoka Local Government Area Anambra State and lies approximately 20 kilometers from Onitsha along the old Enugu-Onitsha Trunk A Road that divides the town into two halves.

Ekwusigo is a Local Government Area in Anambra State, south-central Nigeria. Towns that make up the local government are Ozubulu, Oraifite, Ichi and Ihembosi.At the 2006 Census, Ekwusigo held a population of 158,429. As of 2016, the population of the L.G.A. is projected at 209,600,. Its postal code or ZIP code is 435114. Ekwusigo has its headquarters at Ozubulu. Ozubulu is a large town in Anambra State, Nigeria and the largest town in Ekwusigo L.G.A. The town has an official Post Office. Its neighbouring towns are Nnewi, Ukpor, Ihembosi, Okija and Oraifite. It is a predominantly Christian town although there are still a few people who still worship the town's "Akpu" deity. The town has four major villages: Amakwa, Egbema, Eziora, and Nza. The indigenous occupants of the area are the Igbo people, with the predominant language being the Igbo language and the major occupation being agriculture. It is located at latitude 5°58'17” North and longitude 6°50'7” East. Ekwusigo has an elevation of at least 90metres above sea level. Its geology comprises basically of alluvial sedimentary basin and basement complex. The thick mangrove forest, raffia palms and light rainforest are the major types of vegetation. The soil in the area is mostly clay or loam,.

Okija is the largest town in Ihiala LGA of Anambra State in Southeast Nigeria. The town is the oldest of all the towns in Ihiala local government area, and one of the biggest towns in Igboland. The people of Okija are predominantly Christians. Okija is the home to Madonna University and Legacy University. Bordered in the east by Ihembosi and Ukpor cities, within the west by olu or Ogbakubara, within the north by Ozubulu and within the south by Ihiala. In Okija, the Ulasi River on its flow to the Atlantic, joins Okposi river one of its tributaries.

Awkuzu is a town in Oyi Local Government Area of Anambra state of Nigeria.

Chukwuemeka Chikelu is a Nigerian lawyer and politician who was a National Representative from Anambra State (1999–2003), and then was Minister of Information and National Orientation during the second term of President Olusegun Obasanjo.

Umunya is an Olu Town and one of the five communities that make up Oyi Local Government Area (LGA) of Anambra State Nigeria; it is bordered by six neighbors: Ifite-Dunu, Awkuzu, Nteje, Nkwelle-Ezunaka, Ogbunike, and Umudioka. In the south lies Umudioka and Ifite-Dunu, both in Dunukofia LGA. In the north, Nteje and Nkwelle-Ezunaka. In the east, Awkuzu and in the west, Ogbunike. The boundaries are naturally demarcated by streams except at the border with Nkwelle-Ezunaka where an expanse of Umunya heath namely, Oli-Omoto, Ogwugwu-Obo, Ugwueze, etc. crossed the Kpokili River. Nearly all ten villages of Umunya have their own fresh water springs. The town is blessed with fertile lands; hence, its economy is based on agriculture.

Ukwulu is a town in Dunukofia Local Government Area (LGA) of Anambra State, Nigeria. It is located 13.7 kilometres by road north of the LGA headquarters. It is home to the Igbo peoples.

Ogbunike is a town in the Oyi local government area of Anambra State, Nigeria.

Nteje is the headquarters of Oyi Local Government Area of Anambra state, Nigeria. It is situated about 25 kilometres north-east of Onitsha by land route. It is located on the map along the longitude 6.45°E and the latitude 6.14°N. The land is fairly low, about 500 feet above sea level. 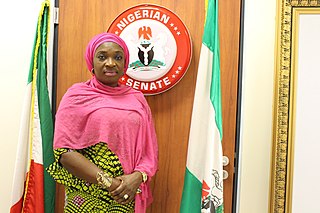 Uche Lilian Ekwunife, is a Nigerian Politician and member of the 9th Nigerian Senate representing the people of Anambra Central Senatorial District of Anambra State.

Eddie Nawgu was a Nigerian self-proclaimed "prophet of God" and Occult practitioner. He was popularly known in the mid-1990s as "Eddy Nawgu" amongst the igbo speaking people of the Federal Republic of Nigeria. His sobriquet "Eddie na Nawgu" came about because he was from the Nawgu community, a town situated in the Dunukofia LGA of Anambra State, Nigeria.

Neni, is an Igbo speaking town in Southeastern Nigeria.