Under Fire may refer to:

Under Fire: The Story of a Squad by Henri Barbusse, was one of the first novels about World War I to be published. Although it is fiction, the novel was based on Barbusse's experiences as a French soldier on the Western Front. 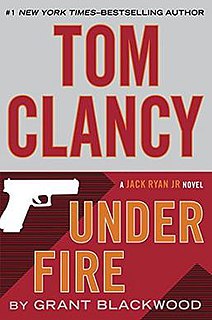 Under Fire is a political thriller novel, written by Grant Blackwood and released on June 16, 2015. It is the first book in the Jack Ryan Jr. series, which is part of the overall Tom Clancy universe, as well as Blackwood's first solo contribution to the franchise. In the novel, Ryan must choose between his country and his mysterious friend Seth Gregory, who is involved in Dagestan's struggle for independence from the Russian Federation. The book debuted at number four on the New York Times bestseller list. 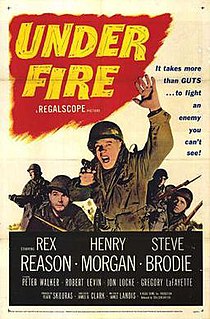 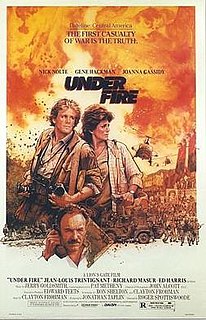 Under Fire is a 1983 American political thriller film set during the last days of the Nicaraguan Revolution that ended the Somoza regime in 1979 Nicaragua. Directed by Roger Spottiswoode, it stars Nick Nolte, Gene Hackman and Joanna Cassidy. The musical score by Jerry Goldsmith, which featured well-known jazz guitarist Pat Metheny, was nominated for an Oscar for Best Original Score. The editing by Mark Conte and John Bloom was nominated for a BAFTA Award for Best Editing. The film was shot in the Mexican states of Chiapas and Oaxaca.

Under Fire! is a tactical level computer game released by Avalon Hill's computer division in 1985. The game was released for Apple II, Commodore 64, and MS-DOS systems. Initial packaging had the name of the designer, Ralph H. Bosson, over the title on the box front so as to read Ralph Bosson's UNDER FIRE!, but subsequent packaging replaced his name and read Avalon Hill's UNDER FIRE! instead. The C64 port was by Dyadic Software Associates.

Under Fire is a 1993 shooter game released in video arcades by Taito Corporation. The game features graphics created using digitized photographs and two player gameplay using gun controllers, similar to Konami's Lethal Enforcers. Unlike Lethal Enforcers, the controllers are not traditional light guns but rather operate using infrared technology. They also provide force feedback when the player pulls the trigger. The game was never released for home consoles. 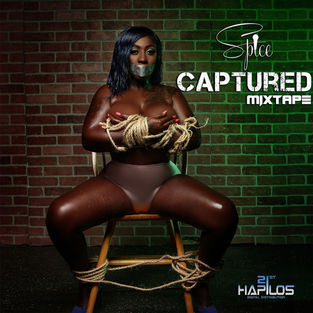 Captured is a mixtape by Jamaican dancehall artist Spice. It was self-released under Spice's own record label, Spice Official Entertainment, on November 2, 2018 via 21st Hapilos Digital.

Under Fire is an album by Argentinian jazz composer and saxophonist Gato Barbieri featuring performances recorded in New York in 1971 and first released on the Flying Dutchman label in 1973.

Survivor may refer to:

A fugitive is a person fleeing from arrest.

Inferno may refer to:

Nightfall or night fall may refer to:

Exile is either an entity who is, or the state of being, away from one's home while being explicitly refused permission to return.

Manhunt may refer to:

Sally may refer to:

The Enemy Within may refer to:

A hotel is an establishment that provides paid lodging on a short-term basis.

Second sight is an extra-sensory vision of future events or of things or events at a remote location.

Betrayal is violation of trust.

The Eleventh Hour is a phrase meaning at the last moment, taken from a passage in the Parable of the Workers in the Vineyard in the King James Bible.

The eye of the storm is a region of calmer weather found at the center of strong tropical cyclones.

Thirteen or 13 may refer to:

A hostage is a person or entity held by a captor.