In Keynesian economics, underemployment equilibrium is a situation with a persistent shortfall relative to full employment and potential output so that unemployment is higher than at the NAIRU or the "natural" rate of unemployment.

In economics, potential output refers to the highest level of real gross domestic product that can be sustained over the long term.

The concept of underemployment equilibrium originates from analyzing underemployment in the context of General Equilibrium Theory, a branch of microeconomics. It describes a steady economic state when consumptions and production outputs are both suboptimal – many economic agents in the economy are producing less than what they could produce in some other equilibrium states.[1] Economic theory dictates that underemployment equilibrium possesses certain stability features under standard assumptions[2] – the “invisible hand” (market force) can not, by itself, alter the equilibrium outcome to a more socially desirable equilibrium.[3] Exogenous forces such as fiscal policy have to be implemented in order to drive the economy to a better state.

: every economic agent h has a utility function

and an initial endowment of wealth

every firm f has a production function

An underemployment equilibrium, given a price vector p, is defined as the consumption-production vector

For every firm f, producing

maximizes its profit
For every economic agent h, consuming

maximizes its utility
The market clears, meaning that the sum of optimal consumptions of all agents,

, equals to the sum of their initial endowments,

plus the sum of optimal profits for all firms,

Given a well-defined economy[2][4], there could be many stable equilibrium states – some are more desirable than others from a social welfare point of view. Many factors contribute to the existence of undesirable equilibriums, among which two are crucial for underemployment equilibrium: oversupply and insufficient demand. When the labor force are overeducated for the skill level of available employment opportunities in the economy, an underemployment equilibrium will occur. Insufficient demand addresses the same issue at the macro level. When there are many fewer job opportunities than unemployed individuals, the unemployment rate is high. Moreover, well-qualified workers will face a tougher job market and thus have to settle for jobs originally meant for less skilled individuals. “Oversupply” here refers to an excess in both labor quantity and quality.

Overqualification is the most common form of underemployment equilibrium and is a direct result of oversupply. It defines the situation when individuals work in professions which require less education, skill, experience or ability than they possess. In economic terms, these agents are producing less than their socially optimal output. Collectively, when a lot of individuals produce below their full potential, the economy is in a sub-optimal underemployment equilibrium.[5]

Overstaffing refers to the state when firms in an economy are hiring more people than they need. This is much less common than overqualification. This redundancy invalidates unemployment rates as a signal for the existence of underemployment equilibrium. When firms are overstaffed, they can not achieve their maximum profit levels, which leads to undesirable social consequences such as low GDP growth.[6]

Underemployment during the Great Depression

During the 1930s, Great Depression, U.S. unemployment rate reached 25% and GDP growth rate fell to −13%.[7] The U.S. economy at this period can be characterized by an underemployment equilibrium. On the one hand, many outside forces (including financial instability, hyper-inflation, lack of capital, etc.) created a negative shock to the demand of job market. On the other hand, the first two decades of the 20th century saw rapid advancement in production technologies, which effectively eliminated a large number of skilled jobs. Both of the above forces help create an insufficient demand of labor market during that time, causing an underemployment equilibrium. This particular underemployment equilibrium takes form of overqualification, characterized by high unemployment rate and low household incomes.

Underemployment in the aftermath of the 2008 financial crisis

Graduates entering the job market in 2012 faced very tough competitions[8], caused by an oversupply of skilled workers, including fresh graduates and people who were laid off during the 2008 financial crisis. Graduates did not have enough time to respond to the 2008 financial crisis and continued to finish their degrees, only to find that there are not enough jobs upon graduation. This underemployment equilibrium state is characterized by overqualification – many college graduates are taking positions designed for less educated individuals due to gloomy job market conditions.[8]

Labour economics seeks to understand the functioning and dynamics of the markets for wage labour.

Pareto efficiency or Pareto optimality is a state of allocation of resources from which it is impossible to reallocate so as to make any one individual or preference criterion better off without making at least one individual or preference criterion worse off. The concept is named after Vilfredo Pareto (1848–1923), Italian engineer and economist, who used the concept in his studies of economic efficiency and income distribution.

The Phillips curve is a single-equation econometric model, named after William Phillips, describing a historical inverse relationship between rates of unemployment and corresponding rates of rises in wages that result within an economy. Stated simply, decreased unemployment, in an economy will correlate with higher rates of wage rises. Phillips did not himself state there was any relationship between employment and inflation, this notion was a trivial deduction from his statistical findings. Samuelson and Solow made the connection explicit and subsequently Milton Friedman and Edmund Phelps put the theoretical structure in place. In so doing, Friedman was to successfully predict the imminent collapse of Phillips' a-theoretic correlation.

Underemployment is the under-use of a worker due to a job that does not use the worker's skills, or is part time, or leaves the worker idle. Examples include holding a part-time job despite desiring full-time work, and overqualification, where the employee has education, experience, or skills beyond the requirements of the job.

Mechanism design is a field in economics and game theory that takes an engineering approach to designing economic mechanisms or incentives, toward desired objectives, in strategic settings, where players act rationally. Because it starts at the end of the game, then goes backwards, it is also called reverse game theory. It has broad applications, from economics and politics to networked-systems.

In labor economics, the efficiency wage hypothesis argues that wages, at least in some markets, form in a way that is not market-clearing. Specifically, it points to the incentive for managers to pay their employees more than the market-clearing wage in order to increase their productivity or efficiency, or reduce costs associated with turnover, in industries where the costs of replacing labor are high. This increased labor productivity and/or decreased costs pay for the higher wages.

There are two fundamental theorems of welfare economics. The first theorem states that a market will tend toward a competitive equilibrium that is weakly Pareto optimal when the market maintains the following three attributes: 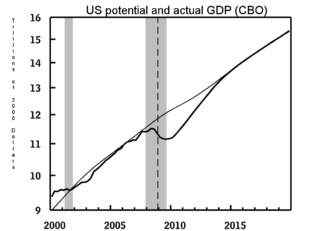 The GDP gap or the output gap is the difference between actual GDP or actual output and potential GDP. The calculation for the output gap is Y–Y* where Y is actual output and Y* is potential output. If this calculation yields a positive number it is called an inflationary gap and indicates the growth of aggregate demand is outpacing the growth of aggregate supply—possibly creating inflation; if the calculation yields a negative number it is called a recessionary gap—possibly signifying deflation.

Walras's law is a principle in general equilibrium theory asserting that budget constraints imply that the values of excess demand must sum to zero. That is: