Uniao Flamengo Santos is a football club from Gabane, Botswana based in Gaborone. They play their home matches at UB Stadium in Gaborone. [1]

The club is named after two Brazilian clubs: Flamengo and Santos. Its colors, however, are blue and white, and its home kit is similar to the Argentine national team's. [2]

Diphetogo "Dipsy" Selolwane is a former Botswana football (soccer) midfielder who played for South African Premier Soccer League club University of Pretoria. He has played as a striker in Major League Soccer.

The FA Challenge Cup, currently known as the Orange FA Cup or Orange Cup for sponsorship reasons, is the premier club football tournament in Botswana. Started in 1968 and first played as the Lions Cup, the tournament is based on the idea of giving lower league and amateur teams a chance to compete with top flight teams. It is based on the English FA Cup, which has become known for "giant killings". 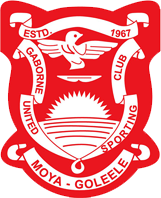 Gaborone United Sporting Club (GU) is a football club from Botswana based in Gaborone. It is the only professional sporting club in Botswana. Its official sponsor is the Mutual and Federal Insurance Company, and it is run and owned partly by Soccer Dynamics. Gaborone United play their home games at several venues.

The Botswana Premier League, currently known as the BTC Premiership for sponsorship reasons, is the highest level football league in Botswana. Organised by the Botswana Football Association, the league was formed in 1978 to replace the pre-independence Bechuanaland Union African Soccer League, which was regional. Participants in the first edition of the league included Tlokweng Pirates, Notwane, Black Peril, Queens Park Rangers and a team from Ngwaketse district.

Mochudi Centre Chiefs Sporting Club are a professional football club based in Gaborone, Botswana, who play in the Botswana first division following their relegation from the Premier League in 2019. Centre Chiefs have won the Botswana Premier League, the highest level of Botswana football, four times. The team originates from Mochudi, a large village on the outskirts of Gaborone.

Township Rollers Football Club is a football club based in Gaborone. Rollers are also known as Popa, The Blues or Tse Tala, the official nicknames of the club. The club is also often referred to as Mapalastina, a nickname that developed in the 1990s but has never been officially adopted by the club. Rollers is most successful club in Botswana football history, with more league titles and cup competitions won than any other local side and enjoys the largest support base of any sports team in the country.

Gabane is a village in Kweneng District of Botswana. It is located 15 km (10 mi) west of Gaborone, the capital of Botswana. The population was 10,399 in 2001 census, making it the fourth largest settlement in Kweneng. Its population was 14,842 at the 2011 census. It's now part of Gaborone agglomeration home to 421,907 inhabitants at the 2011 census.

Tshepo Motlhabankwe is a former Motswana footballer who played for various Botswana Premier League teams such as Mochudi Centre Chiefs and Township Rollers as well as teams in the South African Premier Division. He is also a former Botswana international, having scored 2 goals between his debut in 2003 and retirement in 2013.

The Mascom Top 8 Cup is a football cup competition in Botswana. It was created in 2012, and features the top eight finishers from the Botswana Premier League.

Jwaneng Galaxy Football Club is a Botswana football club based in Jwaneng. The club currently plays in the Botswana Premier League.

Edwin Moalosi is a Motswana football player currently signed to Botswana Premier League club Township Rollers. He made his Botswana debut in 2018 against Lesotho.

Segolame Boy is a Motswana midfielder playing for Township Rollers in the Botswana Premier League.

Madinda Ndlovu is a Zimbabwean former footballer and manager currently in charge of Botswana Premier League club Gaborone United. He is generally considered one of the greatest Zimbabwean players of all time.

Gofaone Tiro was a Motswana professional footballer who played as a winger. Tiro played for several teams including Uniao Flamengo Santos and Township Rollers over a career spanning seventeen years but was never chosen to represent the Botswana national football team at any level.

Mwampule Masule is a Motswana professional footballer who plays as a goalkeeper for the Botswana national team and is currently a free agent. He last played for Botswana Premier League club Orapa United.