Unic, UNIC, or UNICS may also refer to:

Unic was a French manufacturer founded in 1905, and active as an automobile producer until July 1938. After this the company continued to produce commercial vehicles, retaining its independence for a further fourteen years before being purchased in 1952 by Henri Pigozzi, who was keen to develop Unic as a commercial vehicle arm of the then flourishing Simca business.

The University of Calabria is a state-run university in Italy. Located in Arcavacata, a hamlet of Rende in the Province of Cosenza, the university was founded in 1972. Among its founders there were Beniamino Andreatta, Giorgio Gagliani, Pietro Bucci and Paolo Sylos Labini. It currently has about 35,000 students, 800 teaching and research staff and about 700 administrative staff.

BC UNICS is a professional basketball club in Kazan, Russia, that plays in the VTB United League and EuroCup. Their home arena is Basket-Hall Kazan.

Basket-Hall Kazan is a basketball specialized indoor arena that is located in Kazan, Russia. It is primarily used for basketball, but it can also be used for volleyball and concerts. It contains two basketball halls. 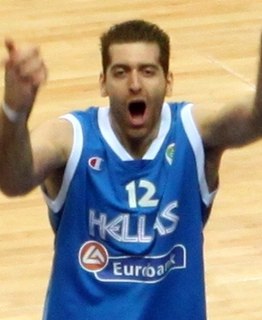 Konstantinos "Kostas" Kaimakoglou is a Greek professional basketball player for UNICS Kazan of the VTB United League. He is 2.06 m (6'9") tall, and his main position is power forward, but he can also play as a small ball center if needed.

The Ultraperformance Nanophotonic Intrachip Communications (UNIC) program is a project of DARPA. It is dedicated to funding projects by chip makers to create nanophotonic microprocessors.

Terrell Lyday is an American former professional basketball player. Standing at 6 ft 3 in (1.91 m), he played at the shooting guard position.

The 2016 VTB United League Playoffs was the deciding play-off tournament that decided the champion of the 2015–16 VTB United League season. The eight teams that finished highest in the regular season were qualified. The Playoffs started on April 29 and ended on June 8, 2016. The champions or runners-up of the Playoffs would qualify for the 2016–17 EuroLeague, dependent on the position of automatically placed CSKA Moscow. CSKA Moscow won the championship, after beating runners-up UNICS that qualified for the EuroLeague as runners-up.

The 2016–17 EuroLeague Regular Season were played from 12 October 2016 to 7 April 2017. A total of 16 teams competed in the regular season to decide the eight places of the playoffs.

United Nations Information Centres (UNIC) is an organization which was established in the year 1946. Its headquarters is in New York, USA, and it currently works worldwide in 63 countries. These centres are managed by the United Nations to exchange & provide current happenings to the world. They are directed by the Department of Public Information of the UN Secretariat to communicate problems related to the Organization. All development projects are reviewed and approved by DPI. These projects are thematic promotional campaigns of the issues related to UN and publicized through the regional information centres.