In linguistics and grammar, a pronoun is a word that substitutes for a noun or noun phrase. It is a particular case of a pro-form.

In grammar, inflection is the modification of a word to express different grammatical categories such as tense, case, voice, aspect, person, number, gender, and mood. It is found in many but not all languages. The inflection of verbs is also called conjugation, and one can refer to the inflection of nouns, adjectives, adverbs, pronouns, determiners, participles, prepositions, postpositions, numerals, articles etc., as declension.

The unidirectionality hypothesis does not claim that linguistic change will occur in any particular instance, only that if it does occur, it will be in the direction of lexical word to grammatical word and not the other way around.

Certain schools of linguistics object to the unidirectionality hypothesis on theoretical grounds, believing that there should be no favoured direction in the evolution of grammatical forms, and have proposed numerous counter-examples. However, most of these proposals show a lack of understanding of the hypothesis or of the history of the languages in question, and are instead examples of lexicalisation. True counter-examples to unidirectionality appear to be rare and require unusual conditions.

One counter-example is the evolution of a new pronoun for "we" out of verbal conjugations in northern dialects of Irish Gaelic. It's as if Spanish hablamos (we speak) were reanalyzed as habla mos, with mos becoming a new pronoun "we" that replaced the existing pronoun nosotros. In Irish this required a rather special set of circumstances.

Unusually for a European language, Irish is verb-initial, as can be seen in phrases such as

Chonaic mé thú "I saw you" (literally saw I thee).

In Old Irish the verb was inflected for person, as it still is in the south of Ireland. The verb 'to be' was inflected as follows:

Old Irish is the name given to the oldest form of the Goidelic languages for which extensive written texts are extant. It was used from c.600 to c.900. The primary contemporary texts are dated c.700–850; by 900 the language had already transitioned into early Middle Irish. Some Old Irish texts date from the 10th century, although these are presumably copies of texts composed at an earlier time period. Old Irish is thus forebear to Modern Irish, Manx, and Scottish Gaelic.

With such a system, there was no need for pronouns except for emphasis, as is the case with Spanish today. However, in the north of Ireland, the system eroded, and most of the inflectional endings disappeared. The use of the subject pronouns then became obligatory to disambiguate the person of the verb. A similar change has taken place in French, where the loss of most of the verbal endings (in the spoken language at least) has meant that subject pronouns are now required.

The subject pronouns of modern Irish are the following:

These were added to the verb wherever the inflections had disappeared. Since the subject comes after the verb in Irish, the pronouns effectively replaced the old verbal endings:

The first-person singular ("I") form is still retained in some areas but appears to be in the process of dropping out and being replaced by the pronoun mé. However, the first-person plural ("we") form—the only ending that was a complete syllable—is robust everywhere, and the pronoun sinn is not used in this situation. This happened not just with the verb 'to be' but with all Irish verbs.

The unidirectionality hypothesis would predict that this paradigm would either remain as it is, with the pronouns retaining their status as independent words, or else that they might fuse with the verb into a new verbal conjugational system, as existed in Old Irish. However, something more unusual occurred: the pronouns did retain their separate status, but the first-person plural verbal ending -mid was reanalyzed as a pronoun, by analogy with the other persons. Thus Irish has acquired a new pronoun for "we", muid, which can be used as an independent word, for example as an emphatic muide "us": If someone asks "Who is there?", an Irish speaker might reply, Is muide ("It is us"). This new pronoun appears to be replacing the original pronoun sinn.

Case is a special grammatical category of a noun, pronoun, adjective, participle or numeral whose value reflects the grammatical function performed by that word in a phrase, clause or sentence. In some languages, nouns, pronouns, adjectives, determiners, participles, prepositions, numerals, articles and their modifiers take different inflected forms, depending on their case. As a language evolves, cases can merge, a phenomenon formally called syncretism.

In linguistics, conjugation is the creation of derived forms of a verb from its principal parts by inflection. Verbs may inflect for grammatical categories such as person, number, gender, tense, aspect, mood, voice, case, possession, definiteness, politeness, causativity, clusivity, interrogativity, transitivity, valency, polarity, telicity, volition, mirativity, evidentiality, animacy, associativity, pluractionality, and reciprocity. Verbs may also be affected by agreement, polypersonal agreement, incorporation, noun class, noun classifiers, and verb classifiers. Agglutinative and polysynthetic languages tend to have the most complex conjugations albeit some fusional languages such as Archi can also have extremely complex conjugation. Typically the principal parts are the root and/or several modifications of it (stems). All the different forms of the same verb constitute a lexeme, and the canonical form of the verb that is conventionally used to represent that lexeme is called a lemma.

In traditional grammar, a part of speech is a category of words which have similar grammatical properties. Words that are assigned to the same part of speech generally display similar behavior in terms of syntax—they play similar roles within the grammatical structure of sentences—and sometimes in terms of morphology, in that they undergo inflection for similar properties.

In linguistic typology, an analytic language is a language that primarily conveys relationships between words in sentences by way of helper words and word order, as opposed to utilizing inflections. For example, the English-language phrase "The cat chases the ball" conveys the fact that the cat is acting on the ball analytically via word order. This can be contrasted to synthetic languages, which rely heavily on inflections to convey word relationships. Most languages are not purely analytic, but many rely primarily on analytic syntax.

This article deals with the grammar of the Finnish language. For the ways in which the spoken language differs from the written language, see Colloquial Finnish. Unlike the languages spoken in neighbouring countries, such as Swedish and Norwegian, which are North Germanic languages, Finnish is a Uralic language, and is typologically between fusional and agglutinative languages.

In grammar the term particle has a traditional meaning, as a part of speech that cannot be inflected, and a modern meaning, as a function word associated with another word or phrase to impart meaning.

Fusional languages or inflected languages are a type of synthetic language, distinguished from agglutinative languages by their tendency to use a single inflectional morpheme to denote multiple grammatical, syntactic, or semantic features. For example, the Spanish verb comer has the first-person singular preterite tense form comí ; the single suffix -í represents both the features of first-person singular agreement and preterite tense, instead of having a separate affix for each feature.

This article discusses the grammar of the Irish language.

Portuguese grammar, the morphology and syntax of the Portuguese language, is similar to the grammar of most other Romance languages — especially that of Spanish, and even more so to that of Galician. It is a relatively synthetic, fusional language. 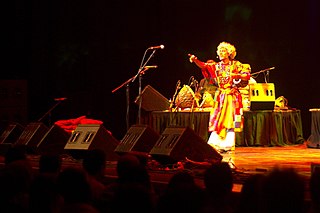 Bengali grammar is the study of the morphology and syntax of Bengali, an Indo-European language spoken in the Indian subcontinent. Although Bengali is typically written in the Bengali script, a Romanization scheme is used here to suggest the pronunciation.

The grammar of Old English is quite different from that of Modern English, predominantly by being much more inflected. As an old Germanic language, Old English has a morphological system that is similar to that of the hypothetical Proto-Germanic reconstruction, retaining many of the inflections thought to have been common in Proto-Indo-European and also including characteristically Germanic constructions such as the umlaut.

The grammar of Modern Greek, as spoken in present-day Greece and Cyprus, is essentially that of Demotic Greek, but it has also assimilated certain elements of Katharevousa, the archaic, learned variety of Greek imitating Classical Greek forms, which used to be the official language of Greece through much of the 19th and 20th centuries. Modern Greek grammar has preserved many features of Ancient Greek, but has also undergone changes in a similar direction as many other modern Indo-European languages, from more synthetic to more analytic structures.

This article deals with the grammar of the Udmurt language.

Portuguese verbs display a high degree of inflection. A typical regular verb has over fifty different forms, expressing up to six different grammatical tenses and three moods. Two forms are peculiar to Portuguese within the Romance languages:

The grammar of Old Saxon is quite different from that of Modern English, predominantly by being much more inflected, similar to that of Old English or Latin. As an ancient Germanic language, the morphological system of Old Saxon is similar to that of the hypothetical Proto-Germanic reconstruction, retaining many of the inflections thought to have been common in Proto-Indo-European and also including characteristically Germanic constructions such as the umlaut. Among living languages, Old Saxon morphology most closely resembles that of modern High German.

This article describes the grammar of the Old Irish language.