United Counties Railways was a short-lived railway that was formed in 1883 and merged in 1900 to form Quebec Southern Railway.

UCR was formed in 1883 and operated rail operations in Quebec from Sorel to Richelieu, then expanded to Iberville, St. Hyacinthe and Bellevue. [1] 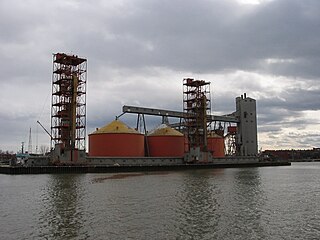 Sorel-Tracy is a city in southwestern Quebec, Canada and the geographical end point of the Champlain Valley at the confluence of the Richelieu River and the St. Lawrence River, on the western edge of Lac Saint-Pierre downstream and east of nearby Montreal. The population as of the Canada 2011 Census was 34,600. Its mayor is Serge Péloquin and it is the seat of the Pierre-De Saurel Regional County Municipality and the judicial district of Richelieu.

Richelieu is a city in Rouville Regional County Municipality, in the province of Quebec, Canada. The population as of the Canada 2011 Census was 5,467. Its name comes from the fact that it lies along the Richelieu River.

Canada East was the northeastern portion of the United Province of Canada. Lord Durham's Report investigating the causes of the Upper and Lower Canada Rebellions recommended merging those two colonies. The new colony, known as the Province of Canada was created by the Act of Union 1840 passed by the Parliament of the United Kingdom, having effect in 1841. For administrative purposes, the new Province was subdivided into Canada West and Canada East. The former name of "Lower Canada" came back into official use in 1849, and as of the Canadian Confederation of 1867, it formed the newly created province of Quebec.

The Grand Trunk Railway was a railway system that operated in the Canadian provinces of Quebec and Ontario and in the American states of Connecticut, Maine, Michigan, Massachusetts, New Hampshire, and Vermont. The railway was operated from headquarters in Montreal, Quebec, with corporate headquarters in London, England. It cost an estimated $160 million to build. The Grand Trunk, its subsidiaries, and the Canadian Government Railways were precursors of today's Canadian National Railways.

The Canadian Northern Railway (CNoR) is a historic Canadian transcontinental railway. At its demise in 1923, when it was merged into the Canadian National Railway, the CNoR owned a main line between Quebec City and Vancouver via Ottawa, Winnipeg, and Edmonton.

The Ontario and Quebec Railway (O&Q) was a historic railway located in southern and eastern Ontario, Canada. It was initially chartered in March 1881 by managers of the Canadian Pacific Railway to run between Toronto and Perth, where it would connect, via a short branch line, to the CPR-controlled Brockville and Ottawa Railway. Construction began in 1882, and the line was completed in August 1884.

The Florida Central and Peninsular Railroad was the final name of a system of railroads throughout Florida, becoming part of the Seaboard Air Line Railway in 1900. The system, including some of the first railroads in Florida, stretched from Jacksonville west through Tallahassee and south to Tampa. Much of the FC&P network is still in service under the ownership of CSX Transportation.

The Aberdeen–Inverness line is a railway line in Scotland linking Aberdeen and Inverness. 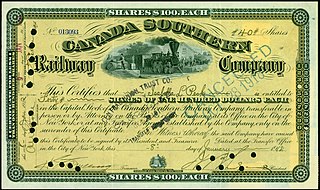 The Canada Southern Railway, also known as CSR, was a railway in southwestern Ontario, Canada, founded on February 28, 1868 as the Erie and Niagara Extension Railway. Its name was changed to Canada Southern Railway on December 24, 1869. The 1868 Act specified that it was to be constructed at a broad gauge of 5 ft 6 in, but that requirement was repealed in the 1869 Act, thus allowing construction at the standard gauge of 4 ft 8 1⁄2 in.

The College of Humanities, Arts and Social Sciences (CHASS) at the University of California, Riverside (UCR) can trace its history to the founding undergraduate institution at UCR, the College of Letters and Science, which first opened in 1954. It is today a vibrant and critical research and teaching oriented community. Notable research centers include the Center for Bibliographical Studies and Research, the Center for Family Studies, the Ernesto Galarza Applied Research Center, and the Robert Presley Center for Crime & Justice Studies.

Vallée-Jonction is a municipality in the Municipalité régionale de comté de la Nouvelle-Beauce in Quebec, Canada. It is part of the Chaudière-Appalaches region and the population is 1,895 as of 2009.

The New Orleans and Northeastern Railroad was a Class I railroad in Louisiana and Mississippi in the United States. The railroad operated 196 miles (315 km) of road from its completion in 1883 until it was absorbed by the Alabama Great Southern Railroad subsidiary of the Southern Railway in 1969.

The Maryland Central Railroad (MCRR) was a 19th-century 3 ft narrow gauge railroad in Maryland, with a small track section in Pennsylvania. It operated freight and passenger trains between Baltimore and Delta, Pennsylvania.

The Howrah–Chennai main line is a railway line connecting Chennai and Kolkata cutting across Eastern Coastal Plains of India. It covers a distance of 1,661 kilometres (1,032 mi) across, West Bengal, Odisha, Andhra Pradesh and Tamil Nadu.

Oudh and Rohilkhand Railway was an extensive railway network in the North India, mostly north of the Ganges, starting from Benares and subsequently up to Delhi.

Quebec Southern Railway refers to two former railways operated in Quebec from 1900 to 1903 and again from 1996 to 2003. The railway was owned by American railway operators, but most of its existence was under Canadian ownership.