UnitingCare Health is a large not-for-profit private hospital group in Australia. It is part of UnitingCare Australia.

UnitingCare Australia is the national body for the UnitingCare network, made up of the Uniting Church in Australia's (UCA) community services agencies.

It is composed over 5 separate facilities:

The Wesley Hospital is a hospital located in the suburb of Auchenflower in Brisbane, Queensland, Australia.

Buderim is an urban centre on the Sunshine Coast, Queensland, Australia. It sits on a 180-metre (590 ft) mountain which overlooks the southern Sunshine Coast communities.

Maryborough is a city and a suburb in the Fraser Coast Region, Queensland, Australia. It is located on the Mary River in Queensland, Australia, approximately 255 kilometres (160 mi) north of the state capital, Brisbane. The city is served by the Bruce Highway. It is closely tied to its neighbour city Hervey Bay which is approximately 30 kilometres (20 mi) northeast. Together they form part of the area known as the Fraser Coast. As of June 2015 Maryborough had an estimated urban population of 27,846. The city was the location for the 2013 Australian Scout Jamboree.

Yandina is a town and locality in the Sunshine Coast Region, in the Australian state of Queensland. At the 2011 census, Yandina had a population of 2,221. The Yandina district has a population of around 9,500 people.

Healthscope is an Australian company which operates private hospitals, medical centres and International pathology services. The company is headquartered on St Kilda Road, Melbourne. It operates medical/surgical hospitals and a number of psychiatric and rehabilitation clinics. 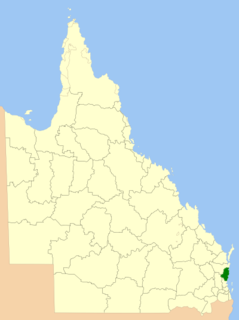 Buderim is an electoral district of the Legislative Assembly in the Australian state of Queensland. Based on the Sunshine Coast, the district is a very safe seat for the Liberal National Party.

Buderim is a major suburb of the Sunshine Coast Region, Queensland, Australia. It is the central suburb of the town of Buderim and comprises 63% of Buderim's urban population.

St John of God Midland Public and Private Hospitals is a health care facility in Midland, Western Australia which opened in November 2015.

Ramsay Health Care is a provider of private healthcare in the UK, Australia, France, Indonesia and Malaysia founded by Paul Ramsay. It was established in Sydney, Australia in 1964. The company specialises in surgery, rehabilitation and psychiatric care. In May 2018, Ascension the private, tax-exempt, nongovernmental health system in the United States partnered with Ramsay Healthcare, in a new global supply chain venture.

Kiernan John Joseph "Skipper" Dorney was an Australian surgeon and one of the most decorated doctors of the Australian war effort. 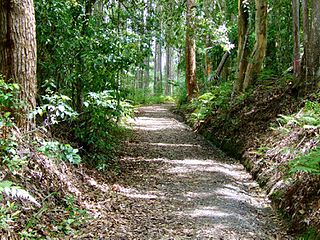 The Palmwoods-Buderim Tramway is a heritage-listed former tramway at Telco Road, Buderim, Sunshine Coast Region, Queensland, Australia. It was built from 1914 and operated until 1935. It was added to the Queensland Heritage Register on 28 July 2000.

Brent Andrew Mickelberg is an Australian politician. He has been the Liberal National Party member for Buderim in the Queensland Legislative Assembly since 2017.

St Stephen's Uniting Church is a heritage-listed Uniting parish church located at 197 Macquarie Street, in the Sydney central business district, in the City of Sydney local government area of New South Wales, Australia. Developed initially as St Stephen's Presbyterian Church, it was designed by Finlay Munro Jnr and John Reid and built from 1935 to 1937 by Kell & Rigby. The property is owned by Uniting Church in Australia. It was added to the New South Wales State Heritage Register on 3 September 2004.