The Universal Hint System, better known by the acronym UHS, is a form of strategy guide used for computer and video games, created by Jason Strautman in 1988. The system is designed to provide hints for solving specific parts of games without including premature spoilers. The strategy guides are primarily distributed in a UHS file format, readable using a UHS reader program.

An acronym is a word or name formed as an abbreviation from the initial components of a phrase or a word, usually individual letters and sometimes syllables.

Strategy guides are instruction books that contain hints or complete solutions to specific video games. The line between strategy guides and walkthroughs is somewhat blurred, with the former often containing or being written around the latter. Strategy guides are often published in print, both in book form and also as articles within video game magazines. In cases of exceptionally popular game titles, guides may be sold through more mainstream publication channels, such as bookstores or even newsstands. Some publishers also sell E-Book versions on their websites.

Since the system's creation, UHS readers have been made available for various platforms, including DOS, Apple Macintosh and Microsoft Windows. The current versions of the official readers are proprietary software products. An official Internet website, UHSWeb went online in 1998, allowing access to UHS guides via web browsers, including text-based web browsers such as Lynx. [1]

DOS is a family of disk operating systems, hence the name. DOS primarily consists of MS-DOS and a rebranded version under the name IBM PC DOS, both of which were introduced in 1981. Other later compatible systems from other manufacturers include DR-DOS (1988), ROM-DOS (1989), PTS-DOS (1993), and FreeDOS (1998). MS-DOS dominated the x86-based IBM PC compatible market between 1981 and 1995.

Microsoft Windows is a group of several graphical operating system families, all of which are developed, marketed, and sold by Microsoft. Each family caters to a certain sector of the computing industry. Active Windows families include Windows NT and Windows Embedded; these may encompass subfamilies, e.g. Windows Embedded Compact or Windows Server. Defunct Windows families include Windows 9x, Windows Mobile and Windows Phone.

Proprietary software, also known as "closed-source software", is a non-free computer software for which the software's publisher or another person retains intellectual property rights—usually copyright of the source code, but sometimes patent rights.

In 2006, a platform-independent open source reader written in Java, OpenUHS, began development. As of 2008, it fully supports all hint formats.

Chuck Miller of Computer Gaming World in 1993 called UHS "a nifty gaming utility that I wish would receive greater, perhaps even universal, support in the gaming community", stating "I heartily recommend the Universal Hint System as an adventurer's resource par excellence". [2]

Freeciv is a single- and multiplayer, turn-based strategy game for workstations and personal computers inspired by the proprietary Sid Meier's Civilization series. It is available for most desktop computer operating systems and available in an online browser based version. Released under the GPLv2, Freeciv is free and open source software. The game's default settings are closest to Civilization II, in both gameplay and graphics, including the units and the isometric grid.

Lynx is a customizable text-based web browser for use on cursor-addressable character cell terminals. As of January 2019, it is the oldest web browser still in general use and active development, having started in 1992.

Play-by-mail games, or play-by-post games, are games, of any type, played through postal mail or email. 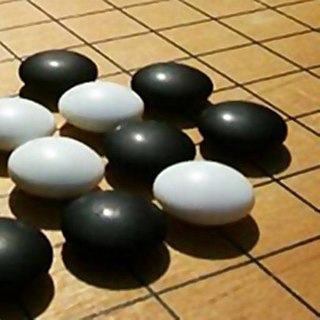 The Smart Game Format (SGF) is a computer file format used for storing records of board games. Go is the game that is most commonly represented in this format and is the default. SGF was originally created under a different name by Anders Kierulf for his SmartGO program. The current version of the format is 4. 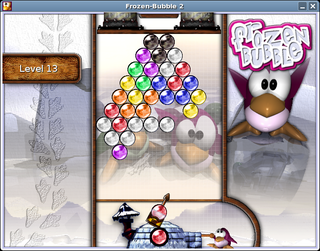 Frozen Bubble is a free software clone of Puzzle Bobble for a variety of home and mobile systems.

Multi Emulator Super System (MESS) is an emulator for many game consoles and computer systems, based on the MAME core and now a part of MAME. MESS emulates portable and console gaming systems, computer platforms, and calculators. The project strives for accuracy and portability and therefore is not always the fastest emulator for any one particular system. Its accuracy makes it also useful for homebrew game development.

The Line Mode Browser is the second web browser ever created. The browser was the first demonstrated to be portable to several different operating systems. Operated from a simple command-line interface, it could be widely used on many computers and computer terminals throughout the Internet. The browser was developed starting in 1990, and then supported by the World Wide Web Consortium (W3C) as an example and test application for the libwww library.

UHS may refer to:

HTML5 can generally be used as an alternative to Adobe Flash. Both include features for playing audio and video within web pages, It can also be used to play some basic HTML5 browser games and integrated vector graphics are possible with both.

PlayCanvas is an open-source 3D game engine/interactive 3D application engine alongside a proprietary cloud-hosted creation platform that allows for simultaneous editing from multiple computers via a browser-based interface. It runs in modern browsers that support WebGL, including Mozilla Firefox and Google Chrome. The engine is capable of rigid-body physics simulation, handling three-dimensional audio and 3D animations.