The University of Okoboji is a fictional university in the state of Iowa in the United States of America. The university was the creation of three brothers in the early 1970s, who printed T-shirts with an "official" school crest. The word "Okoboji" refers to several lakes, and to the town of Okoboji, in the Iowa Great Lakes region that are popular recreational destinations. [1]

The university is home of the "undefeated" (albeit nonexistent) Fighting Phantoms.[ citation needed ]

It is common among those claiming to be alumni to display university decor, such as car decals and T-shirts without informing unsuspecting out-of-staters that the university is not real. The name is now used in connection with several annual fund-raising events for charity, including bike rides, a marathon, and a winter games competition. A local radio station, KUOO, has joined in the joke and refers to itself as the "campus radio". [2]

Dickinson County is a county located in the U.S. state of Iowa. As of the 2020 census, the population was 17,703. The county seat is Spirit Lake. The county was organized in 1857 and is named in honor of Daniel S. Dickinson, a U.S. Senator for New York. 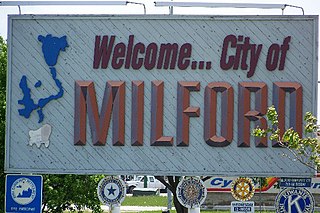 Okoboji is a city in Dickinson County, Iowa, United States, along the eastern shore of West Okoboji Lake in the Iowa Great Lakes region.

East Okoboji Lake is a natural body of water, approximately 1,835 acres (7.43 km²) in area, in Dickinson County in northwest Iowa in the United States. It is part of the chain of lakes known as the Iowa Great Lakes. The area was long inhabited by the Santee or Eastern Dakota Sioux. The lake was known after its Dakota-language name, Okoboozhy, meaning reeds and rushes. 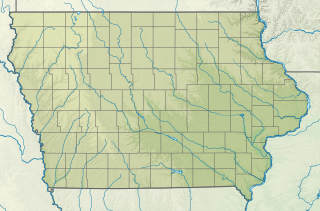 The Iowa Great Lakes, often referred to as Okoboji, is a group of natural lakes in northwestern Iowa in the United States. The three principal lakes of the group are Big Spirit Lake, West Okoboji Lake, and East Okoboji Lake. They are the largest natural lakes in the state of Iowa. The largest, Spirit Lake, is 5,684 acres (2,300 ha). The lake area extends to the north into Jackson County, Minnesota. The headwaters of Little Sioux River flow past the west side of the lake area. 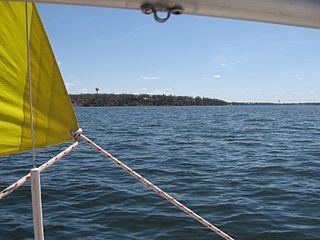 West Okoboji Lake is a natural body of water, approximately 3,847 acres (15.57 km2) in area, in Dickinson County in northwestern Iowa in the United States. It is part of the chain of lakes known as the Iowa Great Lakes. The area was long inhabited by the Santee or Dakota Sioux. The Dakota-language name for the lake was Minnetonka, meaning "great waters".

Lake Okoboji may refer to:

KWIT is the National Public Radio member station for Sioux City, Iowa and northwestern Iowa. It airs a mix of NPR programming and classical music. Owned by Western Iowa Tech Community College, it operates a full-time satellite, KOJI in Okoboji, Iowa. It is the largest NPR station in Iowa that is not a part of Iowa Public Radio.

Elinor Bedell State Park is a state park of Iowa, United States. It is located on the east shore of East Okoboji Lake and represents one of the last remaining open spaces on the Iowa Great Lakes. The 80-acre (32 ha) park was a gift of former U.S. Congressman Berkley Bedell and his wife Elinor. 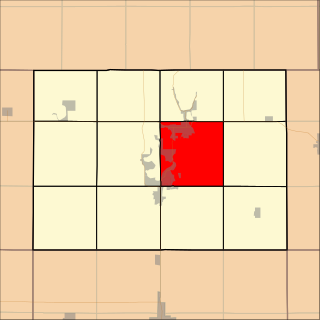 Center Grove Township is one of twelve townships in Dickinson County, Iowa, USA. As of the 2000 census, its population was 7,478. 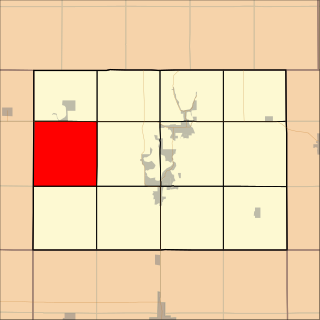 Excelsior Township is one of twelve townships in Dickinson County, Iowa, USA. As of the 2000 census, its population was 186. 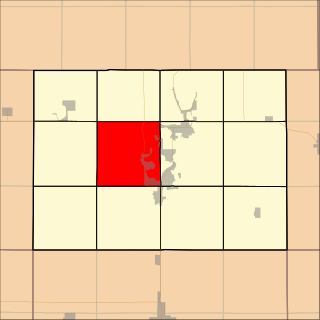 Lakeville Township is one of twelve townships in Dickinson County, Iowa, United States. As of the 2000 census, its population was 1,562. 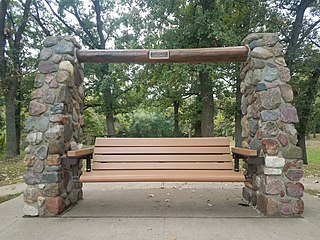 Gull Point State Park is a state park of Iowa, United States, located on West Okoboji Lake in the city of Wahpeton. It is the primary state park unit in the Iowa Great Lakes region. Two areas of the park were listed as nationally recognized historic districts on the National Register of Historic Places in 1990.

KUQQ is a radio station airing a classic rock format licensed to Milford, Iowa, broadcasting on 102.1 MHz FM. It is branded as "Q102, Okoboji's Best Rock". The station serves the areas of Okoboji, Iowa, Spencer, Iowa, Worthington, Minnesota, and Estherville, Iowa, and is owned by Community First Broadcasting, LLC. The station studios are in Spirit Lake with sister stations KUOO and KUYY.

KUYY is a radio station airing an adult top 40 format licensed to Emmetsburg, Iowa, broadcasting on 100.1 MHz FM. The station brands as Y100.1, Today's Best Variety. The station serves the areas of Spencer, Iowa, Estherville, Iowa, and the Iowa Great Lakes and is owned by Community First Broadcasting, LLC. KUYY is sister stations with KUOO and KUQQ. The station studios are in Spencer.

The Okoboji Bridge is located southwest of Milford, Iowa, United States. The 83-foot (25 m) span carried traffic on 180th Avenue over a branch of the Little Sioux River. The Dickinson County Board of Supervisors hired a local contractor to build a bridge across the straits between East and West Okoboji Lakes in 1859. The wooden structures had to be rebuilt in 1874–1875. There was a desire for a drawbridge at this point to allow for steamboats to navigate between the lakes. Three different swing spans were built at this location in the 19th century. When the third span deteriorated the board of supervisors contracted with the Clinton Bridge and Iron Works of Clinton, Iowa to build a permanent span here in June 1909. The Pratt/Warren pony truss structure was completed later that year for $1,550. The bridge and the road were incorporated into the U.S. Highway System, and it was placed under the aegis of the Iowa State Highway Commission. In 1929 it was replaced with a fixed-span concrete girder structure. At that time the 1909 truss span was moved to Okoboji Township to span a branch of the Little Sioux River. It was listed on the National Register of Historic Places in 1998. The span has subsequently been abandoned.