Unknown Instructors are an all-star improvisational rock outfit that features the former rhythm section of Minutemen and fIREHOSE, bassist Mike Watt and drummer George Hurley; Saccharine Trust members, guitarist Joe Baiza and vocalist Jack Brewer; and vocalist/saxophonist Dan McGuire. [1] They have been described as "an all-star reunion of alumni from the SST stable of yore" [2] and Henry Rollins called it a dream lineup. [3]

Minutemen were an American punk rock band formed in San Pedro, California in 1980. Composed of guitarist/vocalist D. Boon, bassist/vocalist Mike Watt, and drummer George Hurley, Minutemen recorded four albums and eight EPs before Boon's death in an automobile accident in 1985; after Boon's death, the band broke up. They were noted in the California punk community for a philosophy of "jamming econo"—a sense of thriftiness reflected in their touring and presentation—while their eclectic and experimental attitude was instrumental in pioneering alternative rock and post-hardcore. 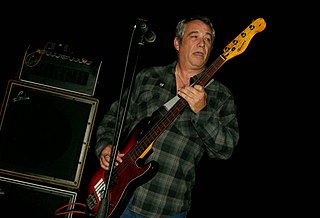 Firehose was an American alternative rock band consisting of Mike Watt, Ed Crawford, and George Hurley (drums). They were initially active from 1986 to 1994, and reunited in 2012.

Michael David Watt is an American bassist, vocalist and songwriter.

Their first album, The Way Things Work , was released in late September 2005 by Smog Veil Records. In October 2005, they returned to the studio to record a second album, this time with Pere Ubu's David Thomas and artist Raymond Pettibon as added participants. [1] The finished product, The Master's Voice , was released in March, 2007. A third album, Funland, followed in 2009. [4] In 2019, the fourth album entitled Unwilling to Explain was released with J Mascis on guitar. [5] [6] It was the first Unknown Instructors album that wasn't improvised. [7]

Smog Veil Records is a Chicago, IL based independent record label. In addition to standard CD, DVD, and vinyl distribution, Smog Veil all distributes its media via the digital channels, including Napster and iTunes.

David Thomas is an American singer, songwriter and musician.

The Master's Voice is the second album by American improvisational band Unknown Instructors. The core quartet of Mike Watt, George Hurley, Joe Baiza, and poet/saxophonist Dan McGuire reconvene on the album, with guest vocals on three tracks by David Thomas and on another track by artist Raymond Pettibon. In addition, Watt also contributes a vocal of his own. The album was recorded at Total Access Studio in Redondo Beach, California, the same studio where Black Flag recorded many of their classic mid-80's album releases and where Watt and Hurley's The Minutemen had recorded Project: Mersh in 1985.

Joseph Donald Mascis Jr. is an American musician, best known as the singer, guitarist and main songwriter for the alternative rock band Dinosaur Jr. He has also released several albums as a solo artist and played drums and guitar on other projects. His most recent solo album, Elastic Days, was released in November 2018. He was ranked number 86 in a Rolling Stone list of the "100 Greatest Guitarists", and number 5 in a similar list for Spin magazine in 2012.

George Hurley is a drummer noted for his work with Minutemen and Firehose.

Ball-Hog or Tugboat? is the debut solo album by former Minutemen and fIREHOSE bassist, songwriter and vocalist Mike Watt. It was recorded in 1994, and came at a personal and professional career crossroads for Watt. fIREHOSE had broken up after eight years and six releases earlier in 1994, and his marriage to former Black Flag bassist Kira Roessler had ended in divorce.

The Black Gang was the trio Mike Watt formed in 1997 to record and tour behind his second solo album, Contemplating The Engine Room. Of all of the "project" (semi-temporary) bands that he has formed since the disbanding of Firehose in 1994, The Black Gang has gone through the most permutations of any of Watt's backing groups.

The Politics of Time is the seventh overall release, third album-length release, and first compilation by American hardcore punk band the Minutemen. 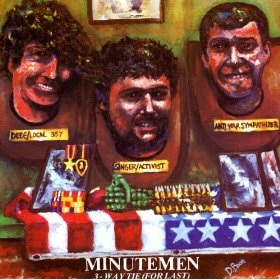 3-Way Tie is the fourth and final full-length album recorded by the American punk band Minutemen. It is particularly notable for featuring several covers of songs by bands such as the Urinals, Meat Puppets, Blue Öyster Cult, Creedence Clearwater Revival, and Roky Erickson. The last song, a cover of Erickson's "Bermuda," was sung over the phone by Mike Watt.

Charles Edward Crawford, known as ed fROMOHIO, is an American best known as the lead singer and guitarist for Firehose, an alternative rock band he formed in 1986 with former Minutemen members Mike Watt and George Hurley (drums).

Saccharine Trust is an American punk rock band from Los Angeles, California, formed in 1980 by singer Jack Brewer and guitarist Joe Baiza. The band would frequently perform with SST labelmates Minutemen and Black Flag. However, Baiza described Saccharine Trust as the "black sheep" of the SST roster. Drummer Rob Holzman appeared on their 1981 debut Paganicons but left the band to play in Slovenly, replaced by drummer Tony Cicero. After a ten-year hiatus circa 1986 to 1996, the band re-formed and began performing around the West Coast.

Joe Baiza is a punk rock and jazz guitarist whom Eugene Chadbourne cites as one of the most noteworthy guitarists to emerge from the Southern California punk rock milieu.

Paganicons is the debut EP of post-hardcore band Saccharine Trust, released on December 10, 1981 through SST. 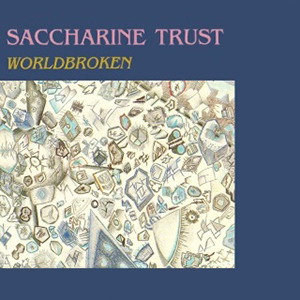 Worldbroken a live album by post-hardcore band Saccharine Trust, released in 1985 through SST. The album was recorded live and completely improvised. Mike Watt of Minutemen stepped in to play bass for the 1985 show.

Joaquin "Jack" Brewer is an American musician known as the singer and lyricist for the Los Angeles post-hardcore band Saccharine Trust which he cofounded with guitarist Joe Baiza.

lowFLOWs: The Columbia Anthology ('91–'93) is a compilation album album by fIREHOSE released in 2012 to coincide with the band's reunion gigs of the same year.