Unmarked Treasure is a poetry collection by the Singaporean poet Cyril Wong, held together by memories about family life and intimate relationships, charged with intense emotions surrounding love, death and exploration of an emptiness within the self. This book marks the first time that an openly gay poet [1] has won both the National Young Artist Award for Literature [2] and the Singapore Literature Prize. [3] As commented on by the poet/playwright Robert Yeo, the book contains "poems about parental displeasure and homosexual relations" but the work also allows the author "to deliberately blur distinctions between the real (Cyril Wong) and the persona (the poet who 'wonders at his own existence'.) The result is a distancing that layers the poems and renders them more fraught and complex and encourages, indeed demands, repeated reading." [4]

Gerald Stern is an American poet, essayist and educator. The author of twenty collections of poetry and four books of essays, Stern has taught literature and creative writing at Temple University, Indiana University of Pennsylvania, Raritan Valley Community College, and Iowa Writers' Workshop. Since 2009, Stern has been distinguished poet-in-residence and a member of the faculty of Drew University's graduate programme for a Master of Fine Arts (MFA) in poetry.

There are no statistics on how many LGBT people there are in Singapore or what percentage of the population they constitute. Section 377A of the Penal Code criminalises sexual acts between men, including consensual and private activities, though it is unenforced. Sexual acts between women are legal.

This article deals with writing that deals with LGBT themes in a Singapore context. It covers literary works of fiction, such as novels, short stories, plays and poems. It also includes non-fiction works, both scholarly and targeted at the general reader, such as dissertations, journal or magazine articles, books and even web-based content. Although Singapore lacks a dedicated gay book publisher or gay bookshop, it does have at least one dedicated gay library, Pelangi Pride Centre, which is open weekly to the public. Many of the works cited here may be found both in Pelangi Pride Centre, as well as the National Library or other academic libraries in Singapore, as well as in some commercial bookshops under 'gender studies' sections.

Cyril Wong is a poet, fictionist and critic.

Edwin Nadason Thumboo B.B.M. is a Singaporean poet and academic who is regarded as one of the pioneers of English literature in Singapore.

Eleanor Wong Siew Yin is a Singaporean playwright, poet, lawyer and legal academic. She is an Associate Professor of Law at the National University of Singapore, where she is Vice Dean of Student Affairs and Director of Legal Skills Programme. She is also a member of the Remaking Singapore Committee.

Ng Yi Sheng is a Singaporean gay writer. He has published a collection of his poems entitled last boy, which won the Singapore Literature Prize, and a documentary book on gay, lesbian and bisexual Singaporeans called SQ21: Singapore Queers in the 21st Century in 2006.

The Singapore Writers Festival is a literary event organised by the National Arts Council. Inaugurated in 1986, the festival serves a dual function of promoting new and emerging Singaporean and Asian writing to an international audience, as well as presenting foreign writers to Singaporeans.

Gwee Li Sui is a poet, a graphic artist, and a literary critic from Singapore.

Tilting Our Plates to Catch the Light is a poetry collection by the Singaporean poet Cyril Wong about "two lovers who are in the process of losing each other," bringing into play his background in music, intermingling the lives of gay male-partners with the tribulations of lovers distant and near, including the romance between "two shape-shifting Hindu deities", Shiva and Mohini. It brings into focus the experience of living with H.I.V. within the homosexual context. The book was chosen by The Straits Times as among the best five books of 2007 and described by the reviewer as "a luminous symphony". 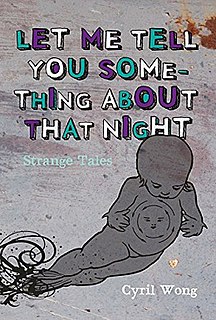 Let Me Tell You Something About That Night is a short-story collection by the Singaporean poet Cyril Wong. His first published foray into prose and listed by The Straits Times as among the best five books of the year, described by the reviewer as possessing "the sharp bite of contemporary issues", the book "takes fairytales and works them into a surreal lustre" and "gestures to a time before fairytales were saccharine fantasies", while a few stories also deal openly with sexuality: "The Boy with the Flower That Grew out of His Ass is a fable of wounding poignancy about homophobia; The Queen & Her Eventual Knowledge of Love is a post-mortem coming-out story."

Joshua Ip is a Singaporean poet, and writer.

The Lover's Inventory is a poetry collection by the Singaporean poet Cyril Wong inventorying objects, places, sensations, and other memorabilia that serve as springboards for memory and philosophical insight; its Confessional verse "confesses without dreary interrogation...in which masks slip on and off in pure, poetic theatre", while the poetry's openness has been transformed into "a defiant act against cultural hypocrisy." The book is "a self-portrait built out of an inventory of intimacies", offering "a critical and tender exploration of how love and sex both help and prevent us from fully understanding ourselves and each other." The book received the Singapore Literature Prize for English poetry in 2016.

Jerrold Yam is a Singaporean poet and lawyer whose poetry has been widely published and anthologised.

firstfruits publications is an independent book publisher based in Singapore. It is an imprint of mediaexodus LLP, a design firm which offers copy-editing and translation services. firstfruits publications is known to publish a diverse range of writers from Singapore. It has published numerous poetry volumes and anthologies by writers including Aaron Maniam, Cyril Wong, Eleanor Wong, Madeleine Lee, Ng Yi-Sheng, and Yong Shu Hoong.