Human capital is the stock of knowledge, habits, social and personality attributes, including creativity, embodied in the ability to perform labor so as to produce economic value. Human capital theory is closely associated with the study of human resources management as found in the practice of business administration and macroeconomics. The original idea of human capital can be traced back at least to Adam Smith in the 18th century. The modern theory was popularized by Gary Becker, an economist and Nobel Laureate from the University of Chicago, Jacob Mincer, and Theodore Schultz. As a result of his conceptualization and modeling work using Human Capital as a key factor, the Nobel Prize for Economics, 2018, was awarded (jointly) to Paul Romer who founded the modern innovation-driven approach to understanding economic growth.

The CAPM adjusted for Human Capital

The original CAPM equation is [9]

Where E is the expectations operator,

is the end-of-period random yield on the jth asset,

is one plus the riskless rate of return.

Mayers (1972) has derived a CAPM for an economy in which nontraded assets exist; specifically, an economy in which individuals are endowed with human capital: labor income of varying size relative to their nonlabor income. [10] This model assumes riskless borrowing and lending, thus implying a linear form of the risk expected return relationship, as does the original CAPM. [11] The adjusted CAPM equation becomes, [12]

is the expectations operator,

is the excess rate of return of the jth asset (

is the excess rate of return on the market,

is the excess rate of return on aggregate human capital,

is the value of aggregate human capital and

is the market value of traded assets (the market portfolio).

In the adjusted CAPM, the beta – the measure of systematic risk – is replaced by an adjusted beta that also accounts for covariance with the portfolio of aggregate human capital. Thus, the model creates a wedge between betas measured against the traded, index portfolio and betas measured against the true market portfolio; the latter also includes human capital (as measured by aggregate labor income). This causes the results to differ in two respects.

Second, in the adjusted CAPM, the portfolios of maximizing investors are not all identical, as is the case in the original CAPM. [14]

), they also estimated the betas of assets with respect to labor income growth (

). As a proxy for changes in the value of human capital they used the rate of change in aggregate labor income. [15] The resulting adjusted CAPM equation becomes

is the market value of the firm's total equity 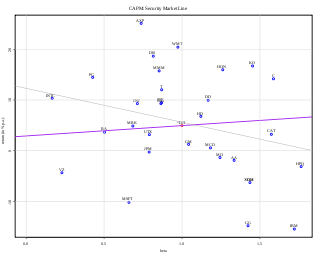 In finance, arbitrage pricing theory (APT) is a general theory of asset pricing that holds that the expected return of a financial asset can be modeled as a linear function of various factors or theoretical market indices, where sensitivity to changes in each factor is represented by a factor-specific beta coefficient. The model-derived rate of return will then be used to price the asset correctly—the asset price should equal the expected end of period price discounted at the rate implied by the model. If the price diverges, arbitrage should bring it back into line.

In finance, the beta of an investment indicates whether the investment is more or less volatile than the market as a whole.

In finance, Jensen's alpha is used to determine the abnormal return of a security or portfolio of securities over the theoretical expected return. It is a version of the standard alpha based on a theoretical performance index instead of a market index.

Alpha is a measure of the active return on an investment, the performance of that investment compared with a suitable market index. An alpha of 1% means the investment's return on investment over a selected period of time was 1% better than the market during that same period; a negative alpha means the investment underperformed the market. Alpha, along with beta, is one of two key coefficients in the capital asset pricing model used in modern portfolio theory and is closely related to other important quantities such as standard deviation, R-squared and the Sharpe ratio.

Business valuation is a process and a set of procedures used to estimate the economic value of an owner's interest in a business. Valuation is used by financial market participants to determine the price they are willing to pay or receive to effect a sale of a business. In addition to estimating the selling price of a business, the same valuation tools are often used by business appraisers to resolve disputes related to estate and gift taxation, divorce litigation, allocate business purchase price among business assets, establish a formula for estimating the value of partners' ownership interest for buy-sell agreements, and many other business and legal purposes such as in shareholders deadlock, divorce litigation and estate contest. In some cases, the court would appoint a forensic accountant as the joint expert doing the business valuation.

The single-index model (SIM) is a simple asset pricing model to measure both the risk and the return of a stock. The model has been developed by William Sharpe in 1963 and is commonly used in the finance industry. Mathematically the SIM is expressed as:

The Intertemporal Capital Asset Pricing Model, or ICAPM, is an alternative to the CAPM provided by Robert Merton. It is a linear factor model with wealth as state variable that forecast changes in the distribution of future returns or income.

Roll's critique is a famous analysis of the validity of empirical tests of the capital asset pricing model (CAPM) by Richard Roll. It concerns methods to formally test the statement of the CAPM, the equation

Capital allocation line (CAL) is a graph created by investors to measure the risk of risky and risk-free assets. The graph displays the return to be made by taking on a certain level of risk. Its slope is known as the "reward-to-variability ratio".

Security characteristic line (SCL) is a regression line, plotting performance of a particular security or portfolio against that of the market portfolio at every point in time. The SCL is plotted on a graph where the Y-axis is the excess return on a security over the risk-free return and the X-axis is the excess return of the market in general. The slope of the SCL is the security's beta, and the intercept is its alpha.

Downside risk is the financial risk associated with losses. That is, it is the risk of the actual return being below the expected return, or the uncertainty about the magnitude of that difference.

Returns-based style analysis is a statistical technique used in finance to deconstruct the returns of investment strategies using a variety of explanatory variables. The model results in a strategy’s exposures to asset classes or other factors, interpreted as a measure of a fund or portfolio manager’s style. While the model is most frequently used to show an equity mutual fund’s style with reference to common style axes, recent applications have extended the model’s utility to model more complex strategies, such as those employed by hedge funds. Returns based strategies that use factors such as momentum signals have been popular to the extent that industry analysts incorporate their use in their Buy/Sell recommendations.

In investing, downside beta is the element of beta that investors associate with risk in the sense of the uncertain potential for loss. It is defined to be the scaled amount by which an asset tends to move compared to a benchmark, calculated only on days when the benchmark’s return is negative.

In investing, upside beta is the element of traditional beta that investors do not typically associate with the true meaning of risk. It is defined to be the scaled amount by which an asset tends to move compared to a benchmark, calculated only on days when the benchmark’s return is positive.