A telecommunications network is a collection of terminal nodes in which links are connected so as to enable telecommunication between the terminals. The transmission links connect the nodes together. The nodes use circuit switching, message switching or packet switching to pass the signal through the correct links and nodes to reach the correct destination terminal. Each terminal in the network usually has a unique address so messages or connections can be routed to the correct recipients. The collection of addresses in the network is called the address space. Examples of telecommunications networks are:

In public networks, the maximum cable length of an U bus is between 4 and 8 km, and the maximum length of an S0-bus is 900 meters for Point-to-Point configuration and about 150-300m for point-to-multipoint configurations. The Up0-bus has, depending on cable quality, a reach of between 2 and 4 km, far more than the S0-bus. This allows the use of ISDN telephone equipment in large private networks. Unlike the S0-bus, the Up0-bus runs at half duplex; that is, both sides alternate in sending and receiving.

While the S0-bus allows for several ISDN device connections (up to 8), the Up0-bus can connect only two devices, one at each end of the cable. 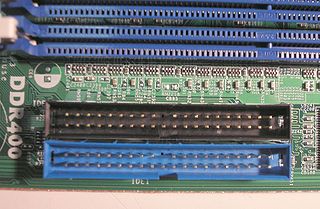 Parallel ATA (PATA), originally AT Attachment, is an interface standard for the connection of storage devices such as hard disk drives, floppy disk drives, and optical disc drives in computers. The standard is maintained by the X3/INCITS committee. It uses the underlying AT Attachment (ATA) and AT Attachment Packet Interface (ATAPI) standards. 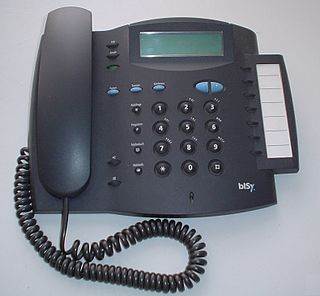 Integrated Services Digital Network (ISDN) is a set of communication standards for simultaneous digital transmission of voice, video, data, and other network services over the traditional circuits of the public switched telephone network. It was first defined in 1988 in the CCITT red book. Prior to ISDN, the telephone system was viewed as a way to transport voice, with some special services available for data. The key feature of ISDN is that it integrates speech and data on the same lines, adding features that were not available in the classic telephone system. The ISDN standards define several kinds of access interfaces, such as Basic Rate Interface (BRI), Primary Rate Interface (PRI), Narrowband ISDN (N-ISDN), and Broadband ISDN (B-ISDN).

USB is an industry standard that establishes specifications for cables, connectors and protocols for connection, communication and power supply between personal computers and their peripheral devices. Released in 1996, the USB standard is currently maintained by the USB Implementers Forum. There have been three generations of USB specifications: USB 1.x, USB 2.0 and USB 3.x; the fourth called USB4 is scheduled to be published in the middle of 2019.

The U interface or U reference point is a Basic Rate Interface (BRI) in the local loop of an Integrated Services Digital Network (ISDN). It is characterized by the use of a 2-wire transmission system that connects the network termination type 1 (NT1) on the customer's premises and the line termination (LT) in the carrier's local exchange. It is not as distance sensitive as a service using an S interface or T interface.

Basic Rate InterfaceorBasic Rate Access is an Integrated Services Digital Network (ISDN) configuration intended primarily for use in subscriber lines similar to those that have long been used for voice-grade telephone service. As such, an ISDN BRI connection can use the existing telephone infrastructure at a business. 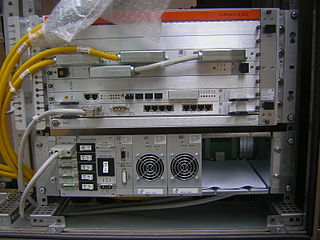 RS-422, also known as TIA/EIA-422, is a technical standard originated by the Electronic Industries Alliance that specifies electrical characteristics of a digital signaling circuit. Differential signaling can transmit data at rates as high as 10 Mbit/s, or may be sent on cables as long as 1,500 meters. Some systems directly interconnect using RS-422 signals, or RS-422 converters may be used to extend the range of RS-232 connections. The standard only defines signal levels; other properties of a serial interface, such as electrical connectors and pin wiring, are part of the RS-449 and RS-530 standards. 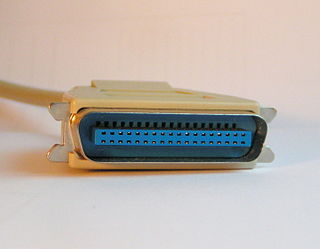 IEEE 1284 is a standard that defines bi-directional parallel communications between computers and other devices. It was originally developed in the 1970s by Centronics, and was widely known as the Centronics port, both before and after its IEEE standardization.

RS-485, also known as TIA-485(-A), EIA-485, is a standard defining the electrical characteristics of drivers and receivers for use in serial communications systems. Electrical signaling is balanced, and multipoint systems are supported. The standard is jointly published by the Telecommunications Industry Association and Electronic Industries Alliance (TIA/EIA). Digital communications networks implementing the standard can be used effectively over long distances and in electrically noisy environments. Multiple receivers may be connected to such a network in a linear, multidrop bus. These characteristics make RS-485 useful in industrial control systems and similar applications.

Parallel SCSI is the earliest of the interface implementations in the SCSI family. SPI is a parallel data bus; There is one set of electrical connections stretching from one end of the SCSI bus to the other. A SCSI device attaches to the bus but does not interrupt it. Both ends of the bus must be terminated.

Digital Addressable Lighting Interface (DALI) is a trademark for network-based systems that control lighting in building automation. The underlying technology was established by a consortium of lighting equipment manufacturers as a successor for 0–10 V lighting control systems, and as an open standard alternative to Digital Signal Interface (DSI), on which it is based.

C-Bus is a communications protocol based on a seven layer OSI model for home and building automation that can handle cable lengths up to 1000 meters using Cat-5 cable. It is used in Australia, New Zealand, Asia, the Middle East, Russia, United States, South Africa, the UK and other parts of Europe including Greece and Romania. C-Bus was created by Clipsal Australia's Clipsal Integrated Systems division for use with its brand of home automation and building lighting control system. C-Bus has been briefly available in the United States but Schneider Electric has now discontinued sales in the United States.

IEEE 1394 is an interface standard for a serial bus for high-speed communications and isochronous real-time data transfer. It was developed in the late 1980s and early 1990s by Apple, which called it FireWire. The 1394 interface is also known by the brands i.LINK (Sony), and Lynx.

This article provides information about the physical aspects of Universal Serial Bus, USB: connectors, cabling, and power. The initial versions of the USB standard specified connectors that were easy to use and that would have acceptable life spans; revisions of the standard added smaller connectors useful for compact portable devices. Higher-speed development of the USB standard gave rise to another family of connectors to permit additional data paths. All versions of USB specify cable properties; version 3.X cables include additional data paths. The USB standard included power supply to peripheral devices; modern versions of the standard extend the power delivery limits for battery charging and devices requiring up to 100 watts. USB has been selected as the standard charging format for many mobile phones, reducing the proliferation of proprietary chargers.