Wild Hearts Can't Be Broken is a 1991 American drama film directed by Steve Miner. It concerns Sonora Webster Carver, a rider of diving horses. Gabrielle Anwar stars as Carver alongside Michael Schoeffling and Cliff Robertson. It is based on events in her life as told in her memoir A Girl and Five Brave Horses . [1] [2]

Sonora Webster lives with her sister, Arnette, and abusive Aunt Helen during the Great Depression. She learns that because of her accidentally letting the cows loose and her suspension from school, her treasured horse, Lightning, has been sold and she will be placed in an orphanage. Instead, she slips out of the house during the night. She ends up at a county fair and sees a performance by Marie, a diving girl who rides a horse off a platform, and aspires to do so too. Marie's employer, Doc Carver, tells her she is too young but gives her a job as a stable hand due to her ability with horses, and she begins traveling with them. Doc's son, Al, wins a wild horse in a card game and Sonora names him Lightning. She later surprises Doc by taming and riding him, so he promises to train her to be a diving girl if she can mount it while it's moving, which she succeeds after multiple attempts.

Marie's regular horse gets sick, therefore Al decides to use Lightning in the shows. Sonora warns Marie not to kick him, but she ignores her and Lightning causes her to fall off and dislocate her shoulder. With her unable to perform, Al asks Sonora if she can do the stunts. Although she has never dove with Lightning, their first jump is successful. Marie becomes jealous, and as Doc tires of her diva-like behavior, she quits rather than share billing with Sonora. Al develops a romance with her that strains his relationship with Doc, and he leaves home after a particularly bad fight. He promises to write to Sonora, but Doc hides all his letters and she thinks that he has forgotten about her. When Doc and the new stable hand, Clifford, are away from the farm in search of jobs for the show, Lightning falls ill with colic. Al returns, and he and Sonora work together to heal Lightning. Doc hasn't found anywhere for them to perform, but then Al announces he has arranged a six-month contract to do so at the Steel Pier in Atlantic City, New Jersey. This reconciles Doc and Al, but then the former passes away of a heart attack on the way to Atlantic City, and Al assumes Doc's role as the show presenter. Sonora searches for Doc's jacket to give Al confidence on his first show, and finds one of Al's letters in it that confesses his love for her, and she lets him know that she feels the same.

Al proposes to Sonora just before a performance in front of their biggest crowd, which she accepts. The horse is a jittery stallion instead of Lightning, and he falters and trips off the end of the diving board after shying from cymbals crashing below. Not expecting it, Sonora has her eyes open as they land in the pool. Both are alive, but Sonora can't see properly. However, she hides this from Al, not wanting him to stop her doing the shows. She wakes the next morning to discover she is permanently blind from detached retinas in both eyes. She has to learn to find her away around, and Al is always by her side to help her. To avoid a breach of contract lawsuit, he must find another diving girl within a week, so he calls Marie, who returns. Meanwhile, Sonora misses diving terribly, especially as she has to stay home while she knows Al and Marie are out performing. She tells Al of her desire to dive with Lightning again, and they work together to try to train her to mount him again, but it proves fruitless and Al gives up. She spends some quiet time with Lightning that night.

The next day, Clifford locks Marie in her dressing room, and Sonora performs in her place with Lightning. Al shouts at her to come back down, but she continues and the jump is successful. Her voiceover tells you that she continued diving for eleven more years with the audience never learning of her blindness, and of her happy marriage to Al.

Upon the film's release, Sonora Webster Carver and her sister, Arnette French, watched it together. Sonora was dissatisfied with its embellishments and felt that it bore little resemblance to her life. [3] She told Arnette that, "the only thing true in it was that I rode diving horses, I went blind, and I continued to ride for another 11 years." Arnette said that the movie, "made a big deal about having the courage to go on riding after she lost her sight. But the truth was that riding the horse was the most fun you could have and we just loved it so." [4]

The film currently holds a 73% fresh rating on Rotten Tomatoes from 11 reviews. [5]

Michael Earl Schoeffling is an American former actor and model, known for playing the role of Jake Ryan in Sixteen Candles, Al Carver in Wild Hearts Can't Be Broken, Kuch in Vision Quest, Joe in Mermaids, and Matt in Sylvester.

Spirit: Stallion of the Cimarron is a 2002 American animated adventure film produced by DreamWorks Animation and distributed by DreamWorks Pictures. The film was directed by Kelly Asbury and Lorna Cook from a screenplay by John Fusco. The film follows Spirit, a Kiger Mustang stallion, who is captured during the American Indian Wars by the United States Cavalry; he is freed by a Native American man named Little Creek who attempts to lead him back into the Lakota village. In contrast to the way animals are portrayed in an anthropomorphic style in other animated features, Spirit and his fellow horses communicate with each other through non-linguistic sounds and body language like real horses. 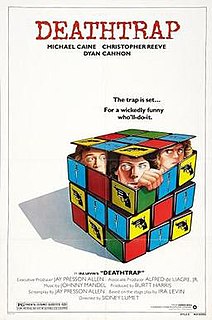 Deathtrap is a 1982 American black comedy mystery film based on the 1978 play of the same name by Ira Levin. The film is directed by Sidney Lumet from a screenplay by Levin and Jay Presson Allen, and stars Michael Caine, Dyan Cannon and Christopher Reeve. Critics gave the film mostly favorable reviews, while noting its plot similarities to Caine's 1972 film Sleuth. 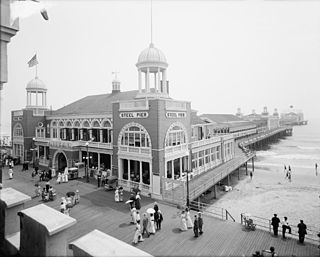 The Steel Pier is a 1,000-foot-long (300 m) amusement park built on a pier of the boardwalk in Atlantic City, New Jersey, across from the Hard Rock Hotel & Casino Atlantic City. Begun in 1898, it was one of the most popular venues in the United States for the first seven decades of the twentieth century, featuring concerts, exhibits, and an amusement park. It billed itself as the Showplace of the Nation and at its peak measured 2,298 feet (700 m).

William Frank "Doc" Carver was a late 19th-century sharpshooter and the creator of a popular diving horse attraction. 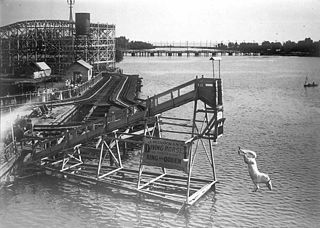 A diving horse is an attraction that was popular in the mid-1880s, in which a horse would dive into a pool of water, sometimes from as high as 60 feet. 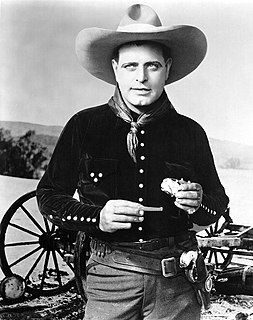 Something to Talk About is a 1995 American comedy-drama film directed by Lasse Hallström, from a screenplay written by Callie Khouri. It stars Julia Roberts and Dennis Quaid as an estranged couple, Kyra Sedgwick as Roberts' sister, and Robert Duvall and Gena Rowlands as their parents. 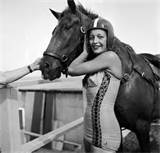 Sonora Webster Carver, born in Waycross, Georgia, was an American entertainer, most notable as one of the first female horse divers. 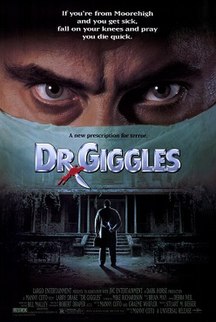 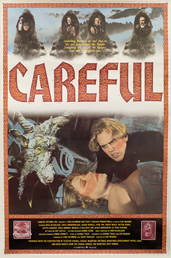 Careful is a 1992 Canadian film directed by Guy Maddin. It is Maddin's third feature film and his first colour film, shot on 16mm on a budget of $1.1 million. At one point, Martin Scorsese had agreed to act in the film, as Count Knotkers, but bowed out to complete Cape Fear. Maddin pursued casting hockey star Bobby Hull, but ended up casting Paul Cox.

The Heartbreak Kid is a 2007 American black comedy film directed by the Farrelly brothers. Starring Ben Stiller, it is a remake of the 1972 film of the same name. Also starring are Michelle Monaghan, Malin Åkerman, Jerry Stiller, Rob Corddry, Carlos Mencia, Scott Wilson and Danny McBride. The screenplay for the 2007 film was written by Leslie Dixon, Scot Armstrong, the Farrelly brothers and Kevin Barnett. 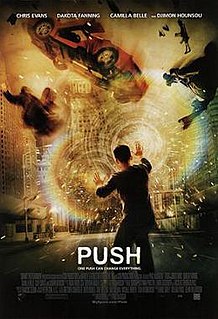 Push is a 2009 American superhero thriller film directed by Paul McGuigan and written by David Bourla. Starring Chris Evans, Dakota Fanning, Camilla Belle, and Djimon Hounsou, the film centers on a group of people born with various superhuman abilities who band together in order to take down a government agency that is using a dangerous drug to enhance their powers in hopes of creating an army of super soldiers.

Dreamkeeper is a 2003 film written by John Fusco and directed by Steve Barron. The main plot of the film is the conflict between a Lakota elder and storyteller named Pete Chasing Horse and his Lakota grandson, Shane Chasing Horse.

The Stalking Moon is a 1968 Western film in Technicolor directed by Robert Mulligan and starring Gregory Peck and Eva Marie Saint. It is based on the novel of the same name by T.V. Olsen. 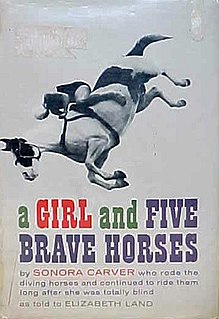 A Girl and Five Brave Horses is a memoir by Sonora Webster Carver published in 1961. 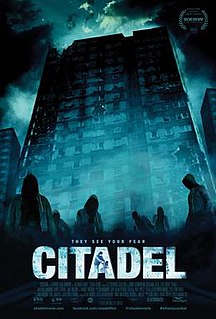 Citadel is a 2012 Irish psychological horror film written and directed by Ciarán Foy, in his feature film debut. It was filmed in Glasgow, Scotland. The film stars Aneurin Barnard as Tommy, a widower who must raise his baby alone after an attack by a gang leaves his wife dead and him suffering from agoraphobia. It is an example of "hoodie horror".

We Can Be Heroes is a 2020 American superhero film written and directed by Robert Rodriguez. It is a follow-up to The Adventures of Sharkboy and Lavagirl in 3-D (2005). Rodriguez was also cinematographer and editor of the film, which stars YaYa Gosselin, Lyon Daniels, Andy Walken, Hala Finley, Lotus Blossom, Dylan Henry Lau, Andrew Diaz, Isiah Russel-Bailey, Akira Akbar, Nathan Blair and Vivien Blair. It was released on December 25, 2020, by Netflix and received mixed reviews from critics. A sequel is in development.