World Naked Gardening Day (WNGD) [1] is an annual international event generally celebrated on the first Saturday of May [2] [3] by gardeners and non-gardeners alike. [4] 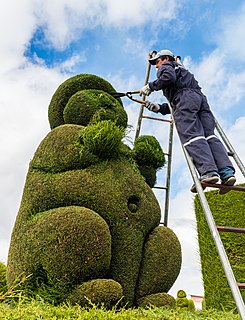 Gardening is the practice of growing and cultivating plants as part of horticulture. In gardens, ornamental plants are often grown for their flowers, foliage, or overall appearance; useful plants, such as root vegetables, leaf vegetables, fruits, and herbs, are grown for consumption, for use as dyes, or for medicinal or cosmetic use. Gardening is considered by many people to be a relaxing activity.

WNGD was founded and organized by Mark Storey (consulting editor for Nude & Natural magazine) and permaculturalist Jacob Gabriel, as a project of Body Freedom Collaborative (BFC). [5] [ better source needed ] In its early days, Storey had a vision of BFC engaging in "guerrilla pranksterism" [6] such as hopping out of a van or showing up spontaneously in an urban environment and engaging in guerilla gardening.

Mark Storey is a board member of the Naturist Action Committee and has testified at anti-nudity legislation hearings all over the United States.

Nude & Natural: The Magazine of Naturist Living or simply N magazine, is a quarterly 100+ page naturist magazine published by The Naturist Society in Oshkosh, Wisconsin and distributed throughout the United States and internationally. According to its web site "N offers readers a deftly balanced blend of timely news and features, incisive commentary and reviews, and perceptive site reports from naturist venues near and far. That and more. And it's all tastefully illustrated with images that take you to the very heart of the naturist experience." The magazine also features scholarly articles on naturist history, culture and current legal issues.

Permaculture is a set of design principles centered on whole systems thinking, simulating, or directly utilizing the patterns and resilient features observed in natural ecosystems. It uses these principles in a growing number of fields from regenerative agriculture, rewilding, and community resilience.

In the New York Daily News, Storey noted that WNGD is not owned by any one organization. "No particular organization owns World Naked Gardening Day," Storey said, and it's not actually one large gathering of horticulturists in Seattle who strip down and shear some shrubs together." [7]

While the phenomenon quickly spread internationally, little investment has been made by its founders. "Storey said he and Johnson haven't spent any money or gone to any great lengths to promote World Naked Gardening Day since they initiated it. They helped create a website early on, and then receded into the background. They intended that the idea of an introduction to clothes freedom through gardening was valuable and would grow organically on its own." [8]

WNGD is endorsed by The Naturist Society, Clothes Free International and American Association for Nude Recreation (AANR), [9] among others. As of 2012, Storey is the project lead of WNGD. [2]

The Naturist Society (TNS) is an American naturist organization based in Oshkosh, Wisconsin, United States. It publishes a quarterly periodical called Nude & Natural which contains articles on naturist activities and issues related to naturism. The Naturist Society was established by Lee Baxandall in 1980. Baxandall was the Society president for a number of years. Baxandall formulated the initial TNS motto: "Body acceptance is the goal, nude recreation is the way." This statement incorporates the belief that the human body is not intrinsically offensive and that the practice of social nudity can be affirming, not degrading.

The American Association for Nude Recreation (AANR) is a naturist organization based in the United States.

The first annual World Naked Gardening Day took place on September 10, 2005. [2] In 2007, the event date was moved to the first Saturday in May; as of 2018, the event still takes place on the first Saturday in May. [10] In 2018, however, the New Zealand Naturist Federation adopted the last weekend in October as World Naked Gardening Day; this date was deemed to be better suited to the climate of the Southern Hemisphere. [11]

According to NBC's Today News, WNGD "has become an annual tradition that celebrates weeding, planting flowers and trimming hedges in the buff. While it's linked to a movement of nudists who promote wholesome and unashamed acceptance of the human body, the day is meant to be funny, lighthearted and non-political, founders say." [8]

Organizers assert that "besides being liberating, nude gardening is second only to swimming as an activity that people are most ready to consider doing nude". [13]

Beyond body positivity, Corky Stanton of Clothes Free International, an organization that promotes nude recreation, has asserted that the event offers the "fringe benefits of bare, unabashed recreation: the satisfaction of exercising in the great outdoors; the attractiveness of an all-over tan; more Vitamin D on your whole body; the unbeatable experience of skinny-dipping if the naturist event involves a beach or a lake." [8]

While the event is most often celebrated in secluded areas, BFC first kicked off the event with its trademark "guerrilla pranksterism" and did a photo shoot in a public park. In another year, Storey and Gabriel enlisted the help of local free beach users at an unofficial clothing-optional beach park on Lake Washington, in Seattle. [8] Many people choose not to venture beyond the relative safety of non-public areas. [8] During the fifth annual World Naked Gardening Day in the United Kingdom, celebrated in 2010, organizers encouraged people to go naked either in their private gardens or in public parks. [14]

Naturism, or nudism, is a cultural movement practicing, advocating, and defending personal and social nudity, most but not all of which takes place on private property. The term may also refer to a lifestyle based on personal, family, or social nudity. Naturism may take a number of forms. It may be practiced individually, within a family, socially, or in public.

Nudity in sport, also known as nude sport, is the practice of taking part in sporting activity while nude.

Public nudity is nudity in a public place, or in a private place that is visible to those in a public place. Nudity on privately owned property onto which the general public is free to enter, is also considered public nudity. Nudity in the privacy of a person's home or grounds is not considered public nudity, nor is nudity at privately-owned facilities where nudity commonly takes place. Naturism is a movement that promotes social nudity in natural settings; most of such nudity takes place on private property.

Lee Raymond Baxandall was an American writer, translator, editor, and activist. He was first known for his New Left engagement with cultural topics and then as a leader of the naturist movement. 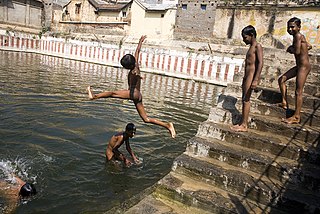 Social nudity is the nude appearance of the human body in relatively public settings not restricted by gender. This occurs both in public spaces and on commercial property, such as at a naturist resort.

Gay naturism or LGBT naturism concerns a lifestyle of gay people in which nudity, especially in a communal context, is viewed as natural, positive and healthy. While naturist clubs and resorts in the United States date back to the 1930s, gay naturist organizations did not emerge until the early 1980s.

Nude recreation refers to recreational activities which some people do in the nude. Such activities can take place in private spaces, such as in a person's own property or in a naturist context, but they can also be a form of public nudity.

Nude weddings, also known as Naked marriage are weddings that may include the couple, bridal parties, and/or guests in the nude. Participants may be committed to the nudist lifestyle or want a different kind of wedding.

Nudity is sometimes used as a tactic during a protest to attract media and public attention to a cause, and sometimes promotion of public nudity is itself the objective of a nude protest. The use of the tactic goes back to well published photos of nude protests by svobodniki in Canada in 1903. The tactic has been used by other groups later in the century, especially after the 1960s. Like public nudity in general, the cultural and legal acceptance of nudity as a tactic in protest also varies around the world. Some opponents of any public nudity claim that it is indecent especially when it can be viewed by children; while others argue that it is a legitimate form of expression covered by the right to free speech.

Nudity, or nakedness, is a state of being in which a human person is not wearing clothing, or more specifically not covering their genitals. Modern humans are the only primates that are essentially hairless and the only animals that wear clothing. For humans, nudity and clothing are connected to many cultural categories such as identity, privacy, and moral behavior.

A nude beach, sometimes called a clothing-optional or free beach, is a beach where users are at liberty to be nude. Nude beaches usually have mixed bathing. Such beaches are usually on public lands, and any member of the public is allowed to use the facilities without membership in any movement or subscription to any personal belief. The use of the beach facilities is normally anonymous. Unlike a naturist resort or facility, there is normally no membership or vetting requirement for the use of a nude beach. The use of nude beach facilities is usually casual, not requiring pre-booking. Nude beaches may be official, unofficial, or illegal. 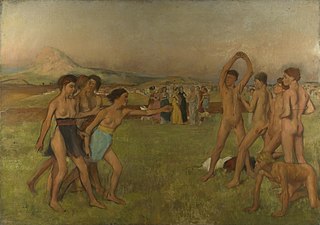 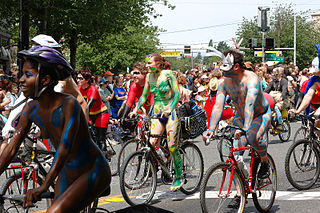 Social nudity in Seattle is an umbrella reference for Seattle's culture of non-sexualized clothing-optional and topfree events.

For over a century, the city of San Francisco, California allowed unrestricted public nudity. In 2012, the city changed the law to require a permit for such displays of public nudity.