The World Spider Catalog (WSC) is an online searchable database concerned with spider taxonomy. It aims to list all accepted families, genera and species, as well as provide access to the related taxonomic literature. The WSC began as a series of individual web pages in 2000, created by Norman I. Platnick of the American Museum of Natural History. After Platnick's retirement in 2014, the Natural History Museum of Bern (Switzerland) took over the catalog, converting it to a relational database. [1]

The order Araneae (spiders) has the seventh-largest number of species of all orders. The existence of the World Spider Catalog makes spiders the largest taxon with an online listing that is updated regularly. It has been described as an "exhaustive resource" that has "promoted rigorous scholarship and amplified productivity" in the taxonomy of spiders. [3]

The wafer trapdoor spiders, family Cyrtaucheniidae, are a widespread family of spiders that lack the thorn-like spines on tarsi and metatarsi I and II found in true trapdoor spiders (Ctenizidae).

Leptonetidae is a relatively primitive family of spiders first described by Eugène Simon in 1890. It is made up of tiny haplogyne spiders, meaning they lack the hardened external female genitalia. Their six eyes are arranged in a semicircle of four in front and two behind. Many live in caves or in leaf litter around the Mediterranean, and in Eurasia, Japan and southern North America.

Norman I. Platnick is an American biological systematist and arachnologist. He is a Professor Emeritus of the Richard Gilder Graduate School and Peter J. Solomon Family Curator Emeritus of the invertebrate zoology department of the American Museum of Natural History. A 1973 Ph.D. recipient at Harvard University, Platnick has described over 1,800 species of spiders from around the world, making him the second most prolific arachnologist in history, behind only Eugène Simon. Until 2014 he was also the maintainer of the World Spider Catalog, a website formerly hosted by the AMNH which tracks the arachnology literature, and attempts to maintain a comprehensive list, sorted taxonomically, of every species of spider which has been formally described. In 2007 he received the International Society of Arachnology's Bonnet award, named for Pierre Bonnet, in recognition for his work on the catalog. 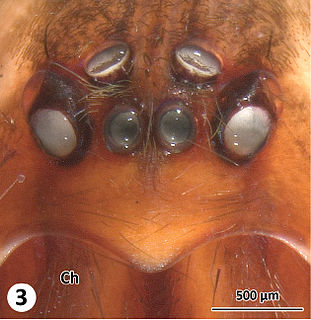 Austrochilidae is a small spider family with ten species in three genera. Austrochilus and Thaida are endemic to the Andean forests of central and southern Chile and adjacent Argentina, while Hickmania is endemic to Tasmania. The monophyly of the family and the relationships among the genera are uncertain as of May 2017.

Ammoxenidae, also known as termite hunters, is a small family of spiders with eighteen species in four genera. Ammoxenus and Rastellus occur in Africa, while Austrammo and Barrowammo occur in Australia.

Gallieniellidae is a family of spiders first described by J. Millot in 1947. It was originally thought to be endemic to Madagascar until species were also found in southern Kenya, northeastern Argentina, and Australia. Drassodella was transferred from the family Gnaphosidae in 1990. They are suspected to be specialized in ant-preying. 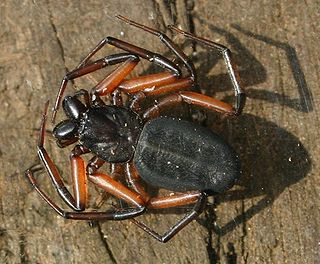 Trochanteriidae is a family of spiders first described by Ferdinand Karsch in 1879 containing about 180 species in 21 genera. Most are endemic to Australia though Doliomalus and Trochanteria are from South America and Olin and Plator are from Asia. Platyoides species exist in southern and eastern Africa, Madagascar, and the Canary Islands with one species, P. walteri, introduced to Australia.

Orsolobidae is a six-eyed spider family with about 180 described species in thirty genera. It was first described by J. A. L. Cooke in 1965, and was raised to family status from "Dysderidae" in 1985.

Mecysmaucheniidae is a family of araneomorph spiders first described by Eugène Simon in 1895. Most genera occur in South America, with two genera endemic to New Zealand.

Kokomopterus is a genus of prehistoric eurypterid. The genus contains a single species, Kokomopterus longicaudatus, known from the Silurian of Kokomo, Indiana.

Triaeris macrophthalmus is a species of spider from the Oonopidae family. It was described by Lucien Berland in 1914 and is endemic to Tanzania. In 2012, Norman I. Platnick and co-authors described the genus Triaeris as "an enigma wrapped around a mystery". They consider that most species assigned to the genus following Simon in 1890 and before 2012 do not belong to Triaeris, including T. macrophthalmus, which they suggest belongs to one of a group of related genera. As of April 2016, no alternative generic assignment has been accepted by the World Spider Catalog. 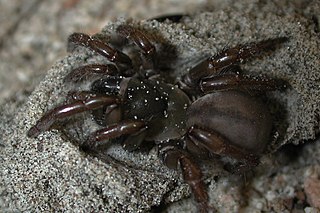 The Euctenizidae are a family of mygalomorph spiders. They are now considered to be more closely related to Idiopidae.

Zorodictyna is a genus of spiders in the family Udubidae native to Madagascar. It has been described as an intermediate genus between Zoropsidae and Dictynidae, though it is now placed in Udubidae. This genus was originally placed in the family Zoropsidae, but it has been reassigned several times since. In 1967, Lehtinen moved it to Miturgidae. In 1999, it was moved back to Zoropsidae, and in 2015, it was moved to Udubidae.

Triaeris is a genus of goblin spiders erected by Eugène Simon in 1890 for the species Triaeris stenaspis. It was described from females from the Lesser Antilles; specimens were found later in heated greenhouses around Europe. No males of T. stenaspis have ever been found and the species may be parthenogenetic. Its taxonomy is confused, and the number of species that should be placed in the genus is unclear. In 2012, Norman I. Platnick and co-authors described the genus Triaeris as "an enigma wrapped around a mystery". They consider that most species assigned to the genus after Simon in 1890 and before 2012 do not belong to Triaeris.

Hubertella is a genus of Asian dwarf spiders that was first described by Norman I. Platnick in 1989. As of May 2019 it contains only three species, found in Nepal: H. montana, H. orientalis, and H. thankurensis.