Last updated June 06, 2020
This article is about the magazine. For the album by Orbit, see XLR8R (album).

XLR8R (pronounced "accelerator") is a website that covers music, culture, style, and technology. It was originally also a print magazine.

XLR8R was founded as a newsprint zine in 1993 by publisher Andrew Smith in Seattle. It has offices in San Francisco and New York City. While XLR8R’s initial focus was on electronic music, it has widened its scope to include indie rock, hip-hop, and reggae/dancehall music as well as related trends in style, art, fashion, and technology. [1] [2]

Standout features of the publication include "Audiofile," a collection of short pieces on up-and-coming musicians; "Machines," a section devoted to technology (reviews, recording techniques of various artists, etc.); "Vis-Ed," a showcase of emerging illustrators, photographers, and designers; and "Bitter Bastard," a curmudgeonly rant on various frustrating topics within the music world. Each issue traditionally has hundreds of reviews of various albums, singles, compilations, books, and DVDs.

XLR8R’s website features breaking music and culture news, high-resolution music videos and free weekly MP3 downloads and podcasts. [3] Additionally, back issues of the print magazine are accessible from 2003 to the present as freely downloadable PDFs.

In March 2007, XLR8R launched XLR8R TV, an internet TV show hosted by Revision3, with a new episode appearing every Tuesday. The show features musicians, artists and scenes covered in the pages of XLR8R magazine.

In 2011, XLR8R ceased publication of their print magazine and became a web only publication.

Breakcore is a style of electronic dance music that emerged out of jungle, hardcore, and drum and bass in the mid-to-late 1990s. it is characterized by very complex and intricate breakbeats and a wide palette of sampling sources, played at high tempos.

Matmos is an experimental electronic music duo originally from San Francisco but now residing in Baltimore. M. C. (Martin) Schmidt and Drew Daniel are the core members, but they frequently include other artists on their records and in their performances, including notably J Lesser. Apart from releasing nine full-length studio albums and numerous collaborative works, Matmos is also well known for their collaboration with Icelandic singer and musician Björk, both on studio recordings and live tours. After being signed to Matador Records for nine years, Matmos signed with Thrill Jockey in 2012. The name Matmos refers to the seething lake of evil slime beneath the city Sogo in the 1968 film Barbarella.

monochrom is an international art-technology-philosophy group, publishing house and film production company. monochrom was founded in 1993, and defines itself as "an unpeculiar mixture of proto-aesthetic fringe work, pop attitude, subcultural science and political activism". Its main office is located at Museumsquartier/Vienna. 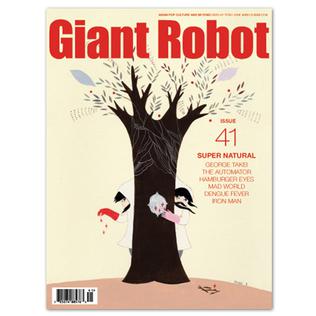 Giant Robot was a bi-monthly magazine of Asian and Asian American popular culture founded in Southern California in 1994. It was one of the earliest American publications to feature prominent Asian film stars such as Chow Yun-fat and Jet Li, as well as Asian musicians from indie and punk rock bands. The coverage later expanded into art, design, Asian American issues, travel, and much more.

URB is a monthly American magazine devoted to electronic music, hip hop and urban lifestyle and culture. Based in Los Angeles, California, the magazine was founded in 1990 by Raymond Roker.

SteamPunk Magazine is an online and print semi-annual magazine devoted to the steampunk subculture. It is published under a Creative Commons license, and is free for download. In March 2008, SteamPunk Magazine began offering free subscriptions to incarcerated Americans, as a "celebration" of 1% of the US population being eligible.

In Tune Monthly is an American magazine that seeks to enrich the band, orchestra, choral and general music curriculum. It is written for middle and high school music students, for whom it is typically purchased by music educators. It is also sold in some musical instrument and equipment stores and can be purchased online.

Launched from the Lower East Side, Manhattan, in 1983 as a subscription only bimonthly publication, the Tellus cassette series took full advantage of the popular cassette medium to promote cutting-edge downtown music, documenting the New York scene and advancing experimental composers of the time – the first 2 issues being devoted to NY artists from the downtown no wave scene. The series was financially supported along the years by funding from the New York State Council of the Arts, Colab and the National Endowment for the Arts.

Speaking in Code is a character-based documentary directed by Amy Grill about people who are lost in the electronic music lifestyle.

Arse Elektronika is an annual conference organized by the Austrian arts and philosophy collective monochrom, focused on sex and technology. The festival presents talks, workshops, machines, presentations and films. The festival's curator is Johannes Grenzfurthner. Between 2007 and 2015, the event was held in San Francisco, but monochrom wants to move the event to Europe.