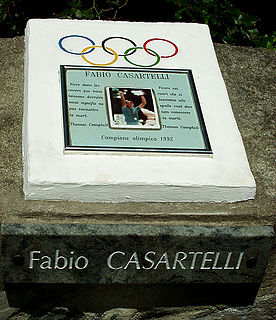 Fabio Casartelli was an Italian cyclist and an Olympic gold medalist who died at 24 in a crash on the descent of the Col de Portet d'Aspet, France, during the 15th stage of the 1995 Tour de France.

The 1995 Tour de France was the 82nd Tour de France, taking place from 1 to 23 July. It was Miguel Indurain's fifth and final victory in the Tour. On the fifteenth stage Italian rider Fabio Casartelli died after an accident on the Col de Portet d'Aspet.

The Volvo Tundra was a concept car built and designed by Bertone in 1979. Bertone was told to do "something delicious" based on the Volvo 343. The angular design was by Marcello Gandini and continued the themes developed for the Lamborghini Silhouette and the Reliant (Anadol) FW11. It was rejected by Volvo, who thought it was too modern and difficult to sell. Bertone instead sold a very similar design to Citroën, where it was produced as Citroën BX. The Tundra's rear side window had a pulled down top edge, a theme which was continued on the BX' C-pillar. The overall effect was of a "floating roof," a design idea which has become popular in the 2010's.

The 1993 Giro d'Italia,, was the 76th edition of the Giro d'Italia, one of cycling's Grand Tours. The Giro started off in Porto Azzurro on 23 May with a split stage, with the first leg being a mass-start stage and the latter an individual time trial. The race ended on 13 June with a stage that stretched 166 km (103.1 mi) from Biella to Milan. Twenty teams entered the race, which was won by Miguel Indurain of the Banesto team. Second and third respectively were the Latvian Piotr Ugrumov and the Italian rider, Claudio Chiappucci. Indurain's victory in the 1993 Giro was his first step in completing the Giro – Tour double – winning the Giro d'Italia and Tour de France in one calendar year – becoming the first rider to repeat this feat in consecutive years.

The 1997 Giro d'Italia was the 80th edition of the Giro d'Italia, one of cycling's Grand Tours. The Giro began on May 17 with a mass-start stage that began and ended in Venice. The race came to a close on June 8 with a mass-start stage that ended in the Italian city of Milan. Eighteen teams entered the race that was won by the Italian Ivan Gotti of the Saeco team. Second and third were the Russian rider Pavel Tonkov and Italian Giuseppe Guerini. 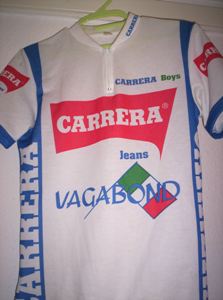 Carrera was an Italian-based road bicycle racing team active from 1984 to 1996, named after sponsoring Italian jeans manufacturer Carrera. The team was successful in the Giro d'Italia and the Tour de France with three overall wins and several wins in the Points classification and Mountain Classifications.

The David di Donatello for Best Sets and Decorations is a film award presented annually by the Accademia del Cinema Italiano to recognize outstanding efforts on the part of film set designers and decorators who have worked within the Italian film industry during the year preceding the ceremony. It was first presented during the 1981 edition of the David di Donatello award show.

Andrea Ferrigato is an Italian former road bicycle racer. In 2020 he achieved a notable sub3 Argus result from the unseeded menagerie of 4F at the Cape Town Cycle Tour.

Giancarlo is an Italian given name meaning "John Charles". It is one of the most common masculine given names in Italy and is often short for "Giovanni Carlo". Notable people with the name include:

Maria I. Perini was an Italian ballet teacher. In 1916, she opened the first private ballet studio in the Tbilisi State Academy of Arts and went on to teach many of the famous Georgian dancers including Dimitri and Irina Aleksidze, Maria Bauer, Soliko Virsaladze, Nino Ramishvili, Iliko Sukhishvili, Vakhtang Chabukiani, Elene Chikvaidze, Maria Kazinets, and Elene Gvaramadze. Her methods of teaching classical dance laid solid foundations for developing Georgian ballet. She was married to the Polish-Georgian artist Henryk Hryniewski.

The 88th running of the Milan–San Remo cycling classic was held on 22 March 1997 and won by German Erik Zabel.

The 1995 Tirreno–Adriatico was the 30th edition of the Tirreno–Adriatico cycle race and was held from 8 March to 15 March 1995. The race started in San Giuseppe Vesuviano and finished in San Benedetto del Tronto. The race was won by Stefano Colagè of the ZG Mobili team.