Zul Kifl Salami is a politician from Benin. He was a minister in the PRPB government. He holds a doctorate in economics. [1]

He was elected as an Islamic Development Bank Executive Director in 2003 on a three-year term, with responsibility for: Algeria, Benin, Mozambique, Syria, Palestine and Yemen. [2] [3]

On February 4, 2005 he was appointed Minister of State in charge of Planning and Development in the new cabinet of Mathieu Kérékou. [4] He held the position until April 2006. [5]

He is the chairman of the Banque Islamique du Bénin.

Benin, officially the Republic of Benin, is a country in West Africa. It is bordered by Togo to the west, Nigeria to the east, Burkina Faso to the north-west, and Niger to the north-east. The majority of its population lives on the small southern coastline of the Bight of Benin, part of the Gulf of Guinea in the northernmost tropical portion of the Atlantic Ocean. The capital of Benin is Porto-Novo, but the seat of government is in Cotonou, the country's largest city and economic capital. Benin covers an area of 114,763 square kilometres (44,310 sq mi) and its population in 2018 was estimated to be approximately 11.49 million. Benin is a tropical nation, highly dependent on agriculture, and is a large exporter of cotton and palm oil. Substantial employment and income arise from subsistence farming.

The Action Front for Renewal and Development is a political party in Benin.

Antoine Idji Kolawolé is a Beninese politician. He was the Minister of Foreign Affairs of Benin from 1998 to 2003 and the President of the National Assembly from 2003 to 2007. 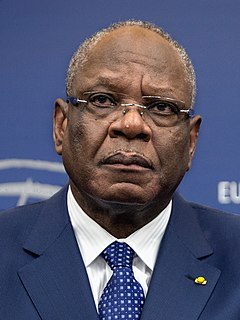 Bruno Ange-Marie Amoussou is a Beninese politician who was President of the National Assembly of Benin from 1995 to 1999 and Minister of State for Planning and Prospective Development under President Mathieu Kérékou from 1999 to 2005. He is currently a Deputy in the National Assembly. As the long-time leader of the Social Democratic Party (PSD), Amoussou stood as a presidential candidate in 1991, 1996, 2001, and 2006. 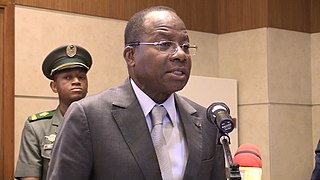 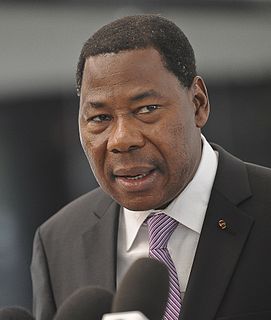 Presidential elections were held in Benin on 5 March 2006. Long-term president Mathieu Kérékou, who had led the country for all but four years since 1972, was barred from running for a third term. In July 2005, Kérékou signalled that he would not seek to change the constitution, as has been done in some other African countries, so that he could run again. Kérékou's long-time rival Nicéphore Soglo was also barred from standing due to his age. With the men who had been among the country's leading political figures since the return of democracy barred from running, the campaign had a level of openness and unpredictability not common for African presidential elections. Since no candidate won a majority, a second round was held between the two leading candidates on 19 March; Yayi Boni won the election and took office in April.

The People's Revolutionary Party of Benin was a political party in the People's Republic of Benin. It was founded in 1975 by General Mathieu Kérékou. With the new constitution of 30 November 1975, PRPB became the sole legal party in the country. Ideologically, the party was committed to Marxism-Leninism.

Antoine Dayori is a Beninese politician and the leader of the Hope Force political party.

Lazare Maurice Sèhouéto is a Beninese politician. Under President Mathieu Kérékou, he served as Minister of Commerce, Industry, Community Development, and the Promotion of Employment from May 2001 to June 2003, and as Minister of Agriculture, Husbandry, and Fishing from June 2003 to February 2005. He was one of five Force Clé candidates elected to the National Assembly in the March 2003 parliamentary election. He was the candidate of the Movement for the People's Alternative in the March 2006 presidential election, taking sixth place with 2.04% of the vote. In the 2007 parliamentary election he was one of four Force Clé candidates to be elected.

Mathurin Coffi Nago is a Beninese politician who was President of the National Assembly of Benin from 2007 to 2015. Previously he was Minister of Higher Education and Vocational Training from 2006 to 2007.

Daniel Tawéma is a Beninese politician. During the regime of Mathieu Kérékou, he became Deputy Director of the Civil Cabinet in April 1979 and served as Director of the Cabinet from 1983 to 1989. From August 1989 to March 1990, he was Minister of Foreign Affairs and Cooperation. Tawéma was a member of the National Assembly of Benin from 1991 to 1995. He was a founding member of the Action Front for Renewal and Development (FARD-Alafia) in 1994. During Kérékou's second period in office, Tawéma was Minister of the Interior from 1998 to February 2005. In February 2004, he was elected as the secretary general of FARD-Alafia, succeeding Jerome Sacca Kina Guezere. In December 2005, Tawéma was designated as his party's candidate for the March 2006 presidential election. In the election, he received 12th place and 0.60% of the vote.

Sacca Lafia is a Beninese politician who has served in the government of Benin as Minister of the Interior since 2016. Previously he was Minister of Mines, Energy, and Water under President Yayi Boni, beginning in 2007. He is President of the Union for Democracy and National Solidarity (UDS), a political party.

Ganiou Soglo is a Beninese politician of the Benin Rebirth Party (RB) who served in the government for a time as Minister of Culture, Literacy, and the Promotion of National Languages. He is the son of former President Nicéphore Soglo and brother of Léhady Soglo.

Ambroise Édouard Noumazalaye was a Congolese politician who was Prime Minister of Congo-Brazzaville from 1966 to 1968, under President Alphonse Massamba-Débat. Later in life he served as Secretary-General of the Congolese Labour Party (PCT) and was a supporter of President Denis Sassou Nguesso. He served as President of the Senate from 2002 to 2007.

Justin Lekoundzou Itihi Ossetoumba is a Congolese politician. He is a founding member of the Congolese Labour Party (PCT), and during the PCT's single-party rule he held important party and government positions in the 1970s and 1980s. He served in the government again from 1997 to 2002 and was elected to the National Assembly of Congo-Brazzaville in 2002.