Zurab Marshan was Minister for Health of Abkhazia from 25 February 2005 until 15 October 2014, in the Governments of President Bagapsh and President Ankvab. Marshan was first appointed after the election of Sergei Bagapsh in 2005. He was re-appointed on 28 October 2011 by Alexander Ankvab following Bagapsh's death. [1] He was not re-appointed by Raul Khajimba after his election in 2014. [2] 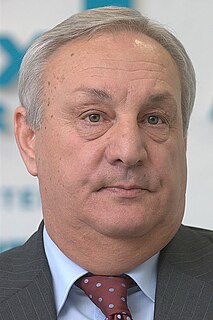 Sergei Uasyl-ipa Bagapsh was the second President of the Republic of Abkhazia. He was Prime Minister from 1997 to 1999 and was later elected as President in 2005. He was re-elected in the 2009 presidential election. He died on 29 May 2011, at the age of 62, from complications of surgery. 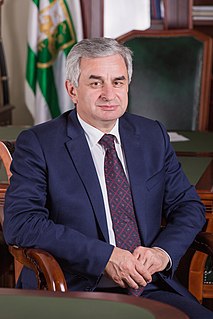 The Prime Minister of Abkhazia is the head of government of the Republic of Abkhazia.

The office of Minister for Foreign Affairs of the Republic of Abkhazia was created on 17 May 1993, during the 1992-1993 war with Georgia. Due to the diplomatic isolation of Abkhazia, which remains widely unrecognised, the role of the foreign minister has been restricted mostly to negotiations over resolving the Georgian-Abkhazian conflict.

Sergei Shamba is a senior politician from Abkhazia. He is currently a member of the People's Assembly of Abkhazia and Chairman of United Abkhazia. He was Prime Minister of Abkhazia under President Sergei Bagapsh from 13 February 2010 until 27 September 2011. Between 1997 and 2010 he had been Minister for Foreign Affairs under both Bagapsh and his predecessor Vladislav Ardzinba, with only a half-year interruption in 2004. Shamba has twice unsuccessfully participated in Presidential elections, in 2004 and 2011. He has been a staunch proponent for dialogue between Abkhazia and Georgia.

Aleksandr Ankvab is an Abkhaz politician and businessman who was President of Abkhazia from May 29, 2011, until his resignation on June 1, 2014. Under President Sergei Bagapsh, he previously served as Prime Minister from 2005 to 2010 and Vice-President from 2010 to 2011.

Aitaira is a public association in Abkhazia. It is co-chaired by former Prime Minister Leonid Lakerbaia.

Gulripshi District is a district of Abkhazia, one of Georgia’s breakaway republics. It corresponds to the eponymous Georgian district. Its capital is Gulripshi, the town by the same name. Until the August 2008 Battle of the Kodori Valley, the north-eastern part of Gulripshi district was part of Upper Abkhazia, the corner of Abkhazia controlled by Georgia until the Battle of the Kodori Valley during the August 2008 South Ossetia War. Upper Abkhazia was home to 1,956 of the district's 19,918 inhabitants, most of whom were ethnic Svans. Most of these fled before the battle and have not yet returned.

Sukhum District is one of the districts of Abkhazia, Georgia’s breakaway republic. It corresponds to the eponymous Georgian municipality. Its capital is Sukhumi, the town by the same name, which is also the capital of entire Abkhazia. The population of the district is 11,531 according to the 2011 census. The city of Sukhumi is a separate administrative entity with more than 60,000 inhabitants.

Nugzar Nuri-ipa Ashuba is a senior politician from Abkhazia. He was Minister of Culture from 1986 until 1992 and the first Chairman of the State Repatriation Committee from 1992 until 1995. He was elected to the People's Assembly of Abkhazia in the 2002 elections, and he was elected Speaker on 3 April 2002 with 23 votes in favour, 10 against and 1 abstention. Ashuba was re-elected in 2007 both as Deputy and as Speaker, but suffered a first-round loss in the 2012 elections. When President Sergei Bagapsh died in 2011, and Vice President Alexander Ankvab participated in the subsequent Presidential election, Ashuba acted as President. On 29 October 2013, he was appointed Security Council Secretary by President Alexander Ankvab to succeed Stanislav Lakoba, who had been dismissed the previous day.

Stanislav Lakoba is an academic and politician from Abkhazia. Lakoba was Sergei Bagapsh's Vice-Presidential candidate in the 2004 Presidential election and from 2005 to 2009 and again from 2011 to 2013 he served as Secretary of the Security Council. He is Professor in Archeology, Ethnology and History at the Abkhazian State University.

Otar Khetsia has twice been Minister of Internal Affairs of Abkhazia.

Vladimir Valerevich Delba is a politician from Abkhazia, who served as acting Prime Minister, Finance Minister and Vice Premier in the Government of President Ankvab.

The Minister for Internal Affairs holds a ministerial position in the government of the Republic of Abkhazia. The post existed in the Soviet period within the Council of Ministers of the Abkhaz Autonomous Soviet Socialist Republic, and since then has been occupied by 10 politicians, of whom three have occupied it twice. The current Minister is Aslan Kobakhia.

Rauf Tsimtsba was the third Minister for Taxes and Fees of Abkhazia, serving between 2011 and 2016 in the Governments of President Bagapsh, President Ankvab and President Khajimba. Tsimtsba was originally appointed on 4 April 2011 by Sergei Bagapsh to succeed Vakhtang Pipia, who had been appointed Vice Premier on 30 March. Before that, Tsimtsba had headed the Department for the Taxation of Legal Entities within the ministry. Following the Death of Bagapsh one month later and the election of Alexander Ankvab, Tsimtsba was re-appointed on 11 October.

The State Security Service of Abkhazia is the principal security and intelligence agency of Abkhazia.

Vakhtang Pipia is the current Chairman of the State Committee for State Property and Privatisation of Abkhazia in the Government of President Khajimba, and a former Vice Premier.

Liudmila Khojashvili is a former Justice Minister and a current judge of the Constitutional Court of Abkhazia.