ZuZu & the SuperNuffs is an animated children's television series that follows the adventures of a group of alien Nuffs, who have been sent to another planet on a mission. It first aired in 2013 on KidsCo. [1]

A trail-blazing intergalactic radio star anxious to escape her serious life, discovers she has magical powers when five furry aliens crash land in her room.

ZuZu & the SuperNuffs was created by Zara & Troy Swindells-Grose, who developed the series along with producer Julie Eckersley for Matchbox Pictures Australia. KidsCo launched in 2007 and was seen in more than 100 territories worldwide. [2] The show was dubbed in more than 16 languages, including Mandarin, Cantonese, Malaysian and Indonesian. [3] 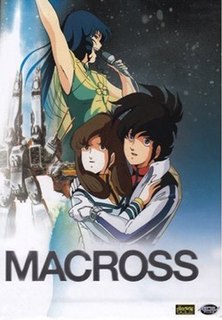 Super Dimension Fortress Macross is an anime television series from 1982. According to story creator Shoji Kawamori, it depicts "a love triangle against the backdrop of great battles" during the first Human-alien war. It is the first part of two franchises: The Super Dimension series and Macross series.

The DIC Entertainment Corporation was an international and French-American film and television production company, that is mostly associated as an animation studio. In 2008, DIC was acquired by the Cookie Jar Group and was folded into it. As of 2012, most of the DIC library is currently owned by WildBrain after DHX acquired the Cookie Jar Group on October 22, 2012.

Frederator Studios is an American animation television production studio which is a division of Frederator Networks, Inc. and founded by Fred Seibert in 1997 with its first series launching in 1998. The studio focuses primarily on artists who write their own shorts, series, and movies. Their slogan is "Original Cartoons since 1998." The studio has locations in New York City, where Frederator Digital is based, and Burbank, California.

Jeem TV, formerly known as Al Jazeera Children's Channel, is a Qatari pay television channel, aimed at kids between 7 and 12 years old. It is owned by the beIN Network. Cartoon Network is a pan-Asian pay television channel that primarily broadcasts animated series. Operated by AT&T's WarnerMedia under its International division, the channel is broadcast from its headquarters in Singapore and Jakarta, Indonesia to audiences in its country of location, as well as to Hong Kong, Macau and the rest of Asia. It was launched on 6 October 1994.

Cartoon Network is an American cable television network owned by the Kids, Young Adults and Classics division of Warner Bros. Entertainment, itself a subsidiary of AT&T's WarnerMedia through its Studios and Networks Group division.

Toonami was an Indian television channel that started as a block on Cartoon Network. The channel was the Indian equivalent to the original American network and was owned by Turner International India.

DreamWorks Channel is a pay television network that is owned and operated by NBCUniversal, a division of Comcast. It first launched in Southeast Asia.

Counterfeit Cat is a British-Canadian animated television series produced by Wildseed Kids and Tricon Kids & Family in association with Teletoon with the participation of Disney XD. The series first aired on Disney XD in the United Kingdom on May 12, 2016. In the United States, the first episode aired on Disney XD as a sneak preview on May 31, 2016 and officially on June 20, 2016. In Canada, it premiered on November 1, 2016. 52 episodes were produced. It has also aired on Pop since 2018.

Oddbods is a Singaporean-Irish CGI-animated comedy television series produced by the Singapore-based studio One Animation. The series centers on seven characters—Bubbles, Pogo, Newt, Jeff, Slick, Fuse and Zee—wearing furry suits of different colors. The characters make sounds but there is no dialogue, making the series easily translatable and international.

Discovery Kids is a television channel for kids in India launched 7 August 2012 by Discovery India, a division of Discovery Networks Asia Pacific.The channel is the Indian equivalent to the original American network.

Z-Squad is a South Korean-Canadian computer-animated television series created by Enemes and Nelvana.