Matchbox Pictures is a film and television production company headquartered in Sydney with production houses in Sydney, Melbourne and Singapore. [2] [3] It was formed in 2008 by Tony Ayres, Penny Chapman, Helen Bowden, Michael McMahon and Helen Panckhurst. In 2011, NBCUniversal took a majority stake in Matchbox Pictures, and full ownership by January 2014. [4]

Current or upcoming productions are listed in bold text.

Programs with a shaded background indicate the program is still in production.

DreamWorks Animation LLC is an American animation studio that produces animated films and television programs and is a subsidiary of Universal Pictures, a division of NBCUniversal, which is itself a division of Comcast. The studio has released 41 feature films as of July 2021, including several of the highest-grossing animated films of all time, with Shrek 2 (2004) having been the highest at the time of its release. The studio's latest film was The Boss Baby: Family Business, which was released on July 2, 2021, and their upcoming slate of films include The Bad Guys on April 15, 2022, and Puss in Boots: The Last Wish on September 23, 2022.

Michael Edelstein began his career in episodic television working CBS Entertainment. There he worked on a number of series on the network’s primetime schedule such as CSI. He then went on to work for NBC Universal

Julie Eckersley is an Australian actress, comedian and writer and producer. She has appeared in comedy shows including Let Loose Live, The Wedge and Newstopia, and in the drama City Homicide, and the children's television series Dead Gorgeous. In addition to her acting, she has written for episodes of The Wedge and Let Loose Live and produced the award-winning series Nowhere Boys.

The Straits is an Australian television drama series for ABC1 filmed in Cairns, the Torres Strait Islands and other Far North Queensland locations. 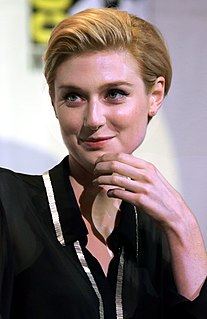 Elizabeth Debicki is an Australian actress.

Blumhouse Productions is an American film and television production company that was founded in 2000 by Jason Blum. Blumhouse is known mainly for producing horror films, such as Paranormal Activity, Insidious, The Purge, Split, Get Out, Happy Death Day, Halloween, Us and The Invisible Man. Blumhouse has also produced drama films, such as Whiplash and BlacKkKlansman, which both earned nominations for the Academy Award for Best Picture; Get Out and BlacKkKlansman won Academy Awards for Best Original Screenplay and Best Adapted Screenplay, respectively. The company also produced The Normal Heart which won the 2014 Primetime Emmy Award for Outstanding Television Movie. Blumhouse has worked with directors such as Leigh Whannell, Jordan Peele, Christopher Landon, James Wan, Mike Flanagan, James DeMonaco, Damien Chazelle, and M. Night Shyamalan.

Old School is an Australian television drama series that screened on ABC1 from 23 May to 11 July 2014. The eight-part series follows the adventures of retired criminal Lennie Cahill and retired cop Ted McCabe. The characters were originally depicted in the short film Lennie Cahill Shoots Through by Paul Oliver.

Devil's Playground is an Australian psychological thriller television series which premiered on Showcase on 9 September 2014. It was created as a sequel to the 1976 film, The Devil's Playground. The series begins in 1988 and follows the story of Tom Allen, a recently widowed psychiatrist and a secular counselor to the Catholic clergy, who becomes entangled in political and theological intrigue. Simon Burke reprised his role as Tom Allen.

The King's Daughter is an upcoming American action-adventure fantasy film directed by Sean McNamara from a screenplay by Barry Berman and James Schamus. It is based on the 1997 novel The Moon and the Sun by Vonda N. McIntyre. The film stars Pierce Brosnan as King Louis XIV, Kaya Scodelario as Marie-Josèphe, and Benjamin Walker as Yves De La Croix.

Tilda Cobham-Hervey is an Australian actress from Adelaide, South Australia, with a background in circus and physical theatre. In 2014 Cobham-Hervey made her film debut at the age of 19 in 52 Tuesdays, a critically acclaimed independent film directed by Sophie Hyde, and has also appeared on stage. She appeared in the 2018 film Hotel Mumbai, and starred as feminist icon Helen Reddy in the 2019 biopic I Am Woman.

Barracuda is an Australian drama miniseries, first broadcast on ABC-TV starting 10 July 2016. The series is based on Barracuda, the 2013 novel by Australian author Christos Tsiolkas, which explores a brutal clash of cultures, dreams and expectations and the relentless demands that are placed upon young athletes, their families, friends, schools and coaches.

Nowhere Boys: The Book of Shadows is a 2016 Australian sci-fi fantasy film directed by David Caesar. It is based on the teen-oriented television series Nowhere Boys created by Tony Ayres, who also co-wrote the film.

The third season of The Real Housewives of Melbourne, an Australian reality television series, was broadcast on Arena. It aired from 21 February 2016, until 15 May 2016, and was primarily filmed in Melbourne, Victoria. Its executive producers are Kylie Washington and Lisa Potasz.

Clickbait is a drama streaming television miniseries, created by Tony Ayres and Christian White. Ayres serves as showrunner, while Brad Anderson, Emma Freeman, Ben Young, and Laura Besley are directors. It was released on Netflix on August 25, 2021.