The company was based on the Sunset Strip in West Hollywood, across Sunset Boulevard from the Chateau Marmont. [3]

Jay Ward Productions was an independent studio from 1948 to 1959. It was part of Dancer Fitzgerald Sample (1959–1979), which originally brokered advertising for, and through its Gamma Productions subsidiary and its distributor Producers Associates of Television, Inc. (P.A.T.), animated Ward's productions. The Program Exchange acquired broadcast rights in 1979.[ citation needed ]

The successor Jay Ward Productions Inc., managed by members of his family, is based in Costa Mesa, California. [4] 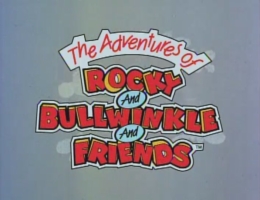 The Adventures of Rocky and Bullwinkle and Friends is an American animated television series that originally aired from November 19, 1959, to June 27, 1964, on the ABC and NBC television networks.

Joseph Ward Cohen Jr. also known as Jay Ward, was an American creator and producer of animated TV cartoon shows. He produced animated series based on such characters as Crusader Rabbit, Rocky & Bullwinkle, Dudley Do-Right, Peabody and Sherman, Hoppity Hooper, George of the Jungle, Tom Slick, and Super Chicken. His company, Jay Ward Productions, designed the trademark characters for the Cap'n Crunch, Quisp, and Quake breakfast cereals and it made TV commercials for those products, and the company also made a Drive-in Theater intermission in 1963, which was later remastered in the 2010s. Ward produced the non-animated series Fractured Flickers that featured comedy redubbing of silent films.

Hoppity Hooper is an American Saturday morning animated television series produced by Jay Ward, and sponsored by General Mills, originally broadcast on ABC from September 26, 1964 until 1967. The series was produced in Hollywood by Jay Ward and Bill Scott, with animation done in Mexico City by Gamma Productions.

Quisp is a sugar-sweetened breakfast cereal from the Quaker Oats Company. It was introduced in 1965 and continued as a mass-market grocery item until the late 1970s. Subsequently, the Quaker Oats Company marketed Quisp sporadically, and with the advent of the Internet, began selling it primarily online. Quisp made its return to supermarkets as a mass-market grocery item in late 2012.

Classic Media, LLC, doing business as DreamWorks Classics, is an American entertainment company owned by DreamWorks Animation, which is a subsidiary of Universal Studios. It was founded as Classic Media in 2000 by Eric Ellenbogen and John Engelman. The studio's library consists of acquired intellectual property catalogs and character brands, as well as the licensing rights for various third-party properties. In 2012, DreamWorks Animation acquired Classic Media from its then-owner, Boomerang Media.

Hector J. Peabody, simply referred to as Mr. Peabody, is an anthropomorphic cartoon dog who appeared in the late 1950s and early 1960s television animated series The Adventures of Rocky and Bullwinkle and Friends, produced by Jay Ward. Peabody appeared in the "Peabody's Improbable History" segments created by Ted Key, and was voiced by Bill Scott. In 2014, he was featured in a computer-animated film, Mr. Peabody & Sherman. From 2015 to 2017, he appeared in a television series based on the film.

William John Scott was an American voice actor, writer and producer for animated cartoons, primarily associated with Jay Ward and UPA, as well as one of the founding members of ASIFA-Hollywood. He is probably best known as the head writer, co-producer and the voice of several characters from the popular programs Rocky and His Friends and The Bullwinkle Show. 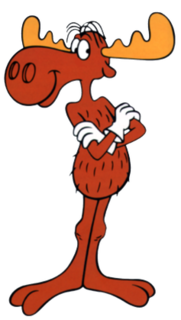 Bullwinkle J. Moose is a fictional character which premiered in the 1959–1964 ABC network animated television series Rocky and His Friends and The Bullwinkle Show, often collectively referred to as Rocky and Bullwinkle, produced by Jay Ward and Bill Scott. When the show changed networks in 1961, the series moved to NBC and was retitled The Bullwinkle Show, where it stayed until 1964. It then returned to ABC, where it was in repeats for nine more years. It has been in syndication ever since. 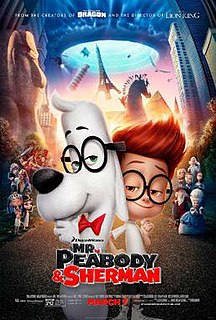 Mr. Peabody & Sherman is a 2014 American computer-animated science fiction comedy film based on characters from the Peabody's Improbable History segments of the animated television series The Adventures of Rocky and Bullwinkle and Friends, produced by DreamWorks Animation and distributed by 20th Century Fox. The film was directed by Rob Minkoff from a script by Craig Wright, with Alex Schwartz and Denise Nolan Cascino serving as producers and Tiffany Ward, daughter of series co-creator Jay Ward, serving as executive producer. Mr. Peabody & Sherman features the voices of Ty Burrell, Max Charles, Ariel Winter, Stephen Colbert, Leslie Mann, and Allison Janney.

Alexander Hume Anderson Jr. was an American cartoonist who created the characters of Rocky the Flying Squirrel, Bullwinkle, and Dudley Do-Right, as well as Crusader Rabbit. He was not directly involved in The Rocky and Bullwinkle Show, however.

Shirley Silvey was an American animator, whose credits included Mr. Magoo, The Rocky and Bullwinkle Show, Dudley Do-Right Show and George of the Jungle. Silvey was considered a pioneer in animation, as she was one of the first women to work in the field.

Wilson D. "Pete" Burness was an American animator and animation director. He was perhaps best known for his work on the Mr. Magoo series. He also contributed to the Tom and Jerry series, Looney Tunes, Merrie Melodies, and Rocky and His Friends.

The Adventures of Rocky and Bullwinkle is an American animated comedy streaming television series produced by DreamWorks Animation Television which is a reboot of the 1959-1964 animated television series of the same name. It debuted on May 11, 2018 on Amazon Prime Video, being DreamWorks Animation Television's first series to air on a streaming service other than Netflix. Like its preceding spin-off The Mr. Peabody & Sherman Show, animation was outsourced by DHX Media's 2D animation studio in Vancouver, Canada. The second half of the series was released on January 11, 2019.