It originates from the Hamburg Kolonialinstitut (colonial institute) founded in 1908. Within the Hamburg Institute of International Economics (HWWA) it turned into a unique public press archives. In 2007 it was absorbed by the German National Library of Economics (ZBW) and merged with the Wirtschaftsarchiv (economics archive) of the Kiel Institute for the World Economy (IfW), founded in 1914. Article collection was discontinued by end of 2005, but the archive is still open to the public. [1]

After a few years, the "Zentralstelle" (central office) of the Kolonialinstitut was transformed from a free information center for colonial issues into a comprehensive archive of global political and economic topics, which primarily supported Hamburg's merchants. After the breakdown of the German colonial empire in World War I, the renaming to "Hamburgisches Welt-Wirtschafts-Archiv" in 1919 sealed this reorientation. [2] The staff of HWWA reflected its importance and grew from 54 in 1919 to 183 permanent or temporary employees in 1958 - a state that seems to have remained largely stable until the late 1990s. [3]

Founded shortly before the outbreak of the First World War, the Kiel Economic Archive and its library were closely linked to the scientific work of the IfW, which focused on global economic contexts and their practical use. [4] In 1966, the library of the IfW was given the function of a central library for economics by the German Research Foundation (DFG) in the Federal Republic of Germany, and in 1993, the department was renamed accordingly. [5]

During the First and the Second World War both archives were intensively involved in the foreign and wartime planning of the empire and the Nazi state. Starting in 1936, "Confidential Reports from the Foreign Press" provided selected economic leaders and Nazi departments with "largely unfiltered information and comments on economic issues from foreign media and represented a unique feature in Nazi media policy". [6] By acting with the informal means of a foreign cultural and information policy supplementing the military expansion policy, HWWA and IfW dedicated their services to the Nazi regime. [7]

In 1996, a closer cooperation between HWWA and ZBW / Wirtschaftsarchiv began with the aim of merging the two archives. Since the beginning of 2001, the articles were indexed according to a new common classification system and made retrievable via a reference database, "EconPress". [8] Following a recommendation from the evaluation within the Leibniz Association in 2003, the current press documentation was finished at the end of 2005 and the materials were frozen at the level reached. [9] The existence of the HWWA ended in 2007 with the integration of its press documentation and library into the ZBW as a newly formed foundation under public law. Today, the press archive belongs to the (research) infrastructures of the Leibniz Association. [10]

Areas of collection and extent

By 1919 at the latest, the Hamburg archive collected "press clippings on a global scale". [11] The archive was subdivided in four sections:

More than 1400 sources have been evaluated for the press archives. [20] Their broad international distribution provides access to the history of political thought and receptive history of the covered topics. Occasionally, the collected publications go back as far as 1826. [21] While the persons archive was only available in paper form until its partial digitization, the holdings of the topics, wares and companies archives have been saved every ten years on roll film or microfiche since the 1960s and then the paper clippings were pulped. [22]

The holdings of the Kiel Wirtschaftsarchiv are less comprehensively documented. They are subdivided into a topics archive, which mainly served the research and teaching of the IfW and which is microfilmed up to 1945, a personal archive, only in paper form, which also contains publications of these persons, and a home archive with publications about the IfW itself, also in paper. [23] The archive on corporate bodies, which in 1958 comprised 4800 companies and more than 5600 German and international scientific and cultural societies and institutions, political parties and trade associations. [24] and represented "one of the most complete collections for twentieth-century business history" [25] is not mentioned any more in the archive's profile. The "war archive" of 1914–1918, which comprehended one million clippings, was destroyed by a bomb strike in 1942. [26] For 1958, when six scientific experts and more than 30 employees in total were collecting and organizing the material, the total extent of the archive was estimated as more than three million, [27] for 1993 as more than ten million. [28]

By the Pressemappe 20. Jahrhundert application, parts of the holdings of both archives are now accessible on the web.

From 2004 to 2007, the German Research Foundation funded a project to digitize parts of the archives. These covered the materials from the beginnings up to 1949 (the constitution of the Federal Republic of Germany). [29]

The paper clippings from the folders of the persons archive were scanned, and metadata (folder and document ID as well as page number, occasionally also source, publication date, author and title) recorded by project staff. Optical character recognition could not be applied due to the partially used Fraktur scripts, the constantly changing fonts (as well as languages) in the sequence of the articles, and the partly poor quality of the clippings. [30] However, the approximately 5,500 person folders created before 1949 are fully accessible online. [19]

The roll film parts of the archive (up to 1960) have also been digitized. As neither the folders nor the documents on these films were separated in a machine-readable fashion, such formal elements could not be automatically derived. Instead, the pages had to be "sliced" with a specially developed "Slider" software, assembled into documents and folders, and given metadata. [31] Only a small part of this labor-intensive process was finished at the end of the project in 2007. It is continued until today, so that new folders are continually made available via the web application "Pressemappe 20. Jahrhundert", which was created within the framework of the project. [32] Of the c. 11,000 company folders on digitized roll film, [16] currently about 7,500 are accessible online. [33] For the topics and wares archives, the share of online folders still seems to be significantly lower. [34] The persons are alphabetically indexed by name, while the companies are accessible by name, geographically by their headquarters and via industry lists. The topics can be accessed via the topics hierarchy and country system as well as through a search for subject and geographical GND keywords and via a world map with geolocations.

The limitation to 1949 was made for capacity reasons, and due to intellectual property rights restrictions. Numerous individual articles within the dossiers are subject to blocking notices if the death of the author or, in the case of anonymous or pseudonymous works, the date of publication is less than 70 years ago. With a moving wall more and more documents should be released over time. [35] How many of the about 5.7 million documents digitized in the context of the project [36] are currently accessible to the scientific and general public on the web is not known.

Karl Rathgen was a German Economist. He was the first Chancellor of the University of Hamburg.

The Rheinisch-Westfälisches Institut für Wirtschaftsforschung, Essen is an independent economic research institute and think tank in Essen, Germany. Founded in 1926, the RWI maintains a non-profit status, mainly funded through public means while also receiving third-party-fundings. It conducts research on economic development, assists policy-making, and fosters economic literacy for the public. The RWI currently employs 80 people and is part of the Leibniz Association, a group of non-university research institutes in Germany. 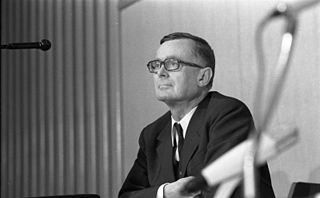 Karl August Fritz Schiller was a German economist and politician of the Social Democratic Party (SPD). From 1966 to 1972, he was Federal Minister of Economic Affairs and from 1971 to 1972 Federal Minister of Finance. He was the inventor of the magic square, depicting Economic equilibrium, and of the Concerted activity to reflate the German market. He is thus seen as one of the most influential German economists beside Ludwig Erhard.

Heinrich Peter Hellwege was a German politician. Hellwege was Federal Minister for Affairs of the Federal Council (1949–1955) and Minister President of Lower Saxony (1955–1959). 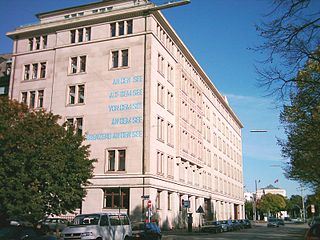 The German National Library of Economics is the world's largest research infrastructure for economic literature, online as well as offline. The ZBW is a member of the Leibniz Association and has been a foundation under public law since 2007. Several times the ZBW received the international LIBER Award for its innovative work in librarianship. The ZBW allows for access of millions of documents and research on economics, partnering with over 40 research institutions to create a connective Open Access portal and social web of research. Through its EconStor and EconBiz, researchers and students have accessed millions of datasets and thousands of articles. The ZBW also edits two journals: Wirtschaftsdienst and Intereconomics.

Rudolf Querner was a German SS functionary during the Nazi era. He served as the Higher SS and Police Leader in Austria and Germany and was responsible for the evacuations and death marches from concentration camps at the end of the war. Arrested by the Allied authorities, he committed suicide in prison.

The Ibero-American Institute or IAI is an interdisciplinary institution located in Berlin, Germany for academic and cultural exchange between Germany and Latin America, Spain, Portugal and the Caribbean. It is the largest non-university research center for Latin American Studies outside of Latin America. It also features the largest specialized library in Europe on Latin America, Spain, Portugal and the Caribbean. In addition to a large rare book collection, the IAI collects and preserves magazines, electronic documents, maps, audio media, photographs, videos, DVDs, papers and diverse additional materials. The IAI is a member of the Research Association CEISAL and the documentation network association REDIAL. Founded in 1930, since 1962 the IAI has been an agency of the Prussian Cultural Heritage Foundation. It is located at the Kulturforum near Potsdamer Platz in Berlin-Mitte.

Wirtschaftsdienst – Zeitschrift für Wirtschaftspolitik is a peer-reviewed academic journal covering economic and social policy issues in Germany or affecting Germany. It also publishes topics of the European Union in the fields of trade, econometrics, environment, and monetary policy. The editor-in-chief is Jun.-Prof. Dr. Christian Breuer and it is published by Springer Science+Business Media. The journal is an official publication of the German National Library of Economics (ZBW). It was established in 1916 and is one of the oldest academic economics journals.

Adolf Weber was a German economist.

Bernhard Harms (1876-1939) was a German economist and one of the first professors to undertake research in the field of international economics. He founded the Kiel Institute for the World Economy, Germany's leading economic research institute, in 1914. Harms was Chair of Economics at the University of Kiel and head of the Institute until he was dismissed from office in 1933 by Nazi Party officials.

Christian Decker is a German economist, university professor, and e-learning author. He is the head of International Business Economics at the Hamburg University of Applied Sciences.

Franz Urbig was a German banker. He joined the Disconto-Gesellschaft as a trainee on 15 July 1884 and built much of his career and reputation within this bank in Southeast Asia during the final part of the nineteenth century. Between 1902 and 1929, when the bank merged with the larger Deutsche Bank, he was a partner in the Disconto-Gesellschaft. Between 1930 and his death in 1944 he was chairman of the supervisory board at the enlarged Deutsche Bank. His long career was not without controversy.

Ulrich Pfeil is a German historian based in France.

Paul Louis Riebesell was a German mathematician, statistician, actuary, and president of Hamburger Feuerkasse. At the International Congress of Mathematicians, he was an invited speaker in 1932 in Zürich and in 1936 in Oslo.