The Integrated Authority File (German : Gemeinsame Normdatei; also known as the Universal Authority File) or GND is an international authority file for the organisation of personal names, subject headings and corporate bodies from catalogues. It is used mainly for documentation in libraries and increasingly also by archives and museums. The GND is managed by the German National Library (German: Deutsche Nationalbibliothek; DNB) in cooperation with various regional library networks in German-speaking Europe and other partners. The GND falls under the Creative Commons Zero (CC0) licence. [1]

The GND specification provides a hierarchy of high-level entities and sub-classes, useful in library classification, and an approach to unambiguous identification of single elements. It also comprises an ontology intended for knowledge representation in the semantic web, available in the RDF format. [2]

The Integrated Authority File became operational in April 2012 and integrates the content of the following authority files, which have since been discontinued:

There are seven main types of GND entities: [3]

The Semantic Web has the ultimate goal of making a machine understand Internet data. To enable the encoding of semantics with the data, well-known technologies are used such as RDF and OWL. These technologies formally represent the meaning involved in information. For example, ontology can describe concepts, relationships between things, and categories of things. These embedded semantics offer significant advantages such as reasoning over data and dealing with heterogeneous data sources.

MARCstandards are a set of digital formats for the description of items catalogued by libraries, such as books. Working with the Library of Congress, American computer scientist Henriette Avram developed MARC in the 1960s to create records that could be read by computers and shared among libraries. By 1971, MARC formats had become the US national standard for dissemination of bibliographic data. Two years later, they became the international standard. There are several versions of MARC in use around the world, the most predominant being MARC 21, created in 1999 as a result of the harmonization of U.S. and Canadian MARC formats, and UNIMARC, widely used in Europe. The MARC 21 family of standards now includes formats for authority records, holdings records, classification schedules, and community information, in addition to the format for bibliographic records.

DNB ASA is Norway's largest financial services group with total combined assets of more than NOK 1.9 trillion and a market capitalisation NOK 164 billion as per 20 May 2016. DNB's head office is located in Oslo.

GND may refer to: 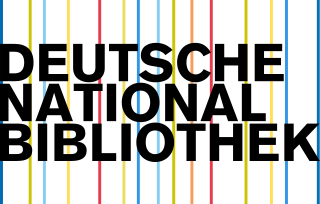 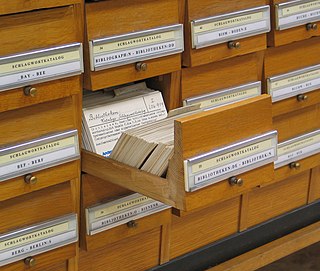 Metadata is "data that provides information about other data". In other words, it is "data about data." Many distinct types of metadata exist, including descriptive metadata, structural metadata, administrative metadata, reference metadata and statistical metadata.

The Name Authority File is an authority file of people, which served primarily to access literature in libraries. The PND has been built up between 1995 and 1998 and was published by the German National Library until 2012. For each person there is a record with his or her name, birth and occupation connected with a unique identifier, the PND number.

Florentine Lahme is a German actress. 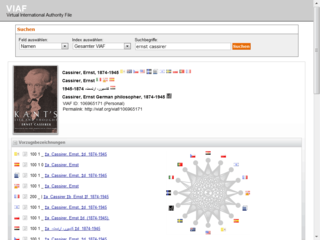 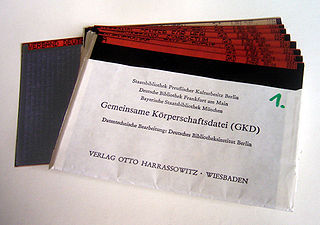 The Corporate Bodies Authority File or GKD is a German authority control for the organisation of corporation names from catalogues. It is used mainly for documentation in libraries. Like the Subject Headings Authority File and the Name Authority File, the GKD is looked after and updated by the German National Library (DNB), the Bavarian State Library, the Berlin State Library and, since 1997, the Austrian National Library, several library networks taking part. The responsible editor is the State Library in Berlin. The Common Corporate File was created in the 1970s from the catalogue data of the Journal Database (ZDB). In April 2004 it contained more than 915,000 records.

The Name and Title Authority File of Catalonia (CANTIC) is an authority union catalogue within the Union Catalogue of Universities of Catalonia (CCUC), that it is led by the Biblioteca de Catalunya. Its goals are to standardize the access points in bibliographic catalogues, to improve communication among catalogues and mainly, to make easier the information research and retrieval. CANTIC gives a special treatment to name and title authorities related with Catalan culture. These authorities receive a complete authority work and provide, eventually, access to the Enciclopèdia Catalana.