The 3 Skypephone S2 runs on the iSkoot for Skype platform to provide its Skype service. iSkoot's shutdown of this service on 20 January 2011 [1] caused this phone to show a non-functioning "click to upgrade" link, although some other phones were not affected. [2] No warning was given by Three for this shutdown, and visiting the Three website shows they removed the Skypephone from their product offerings. This violates Three's own terms and conditions[ citation needed ] and the "Free Skype forever" promise [3] leaving customers very angry and unable to use the arguably main functionality of this phone. [4]

The battery life is as follows:

The Motorola MPx200 Smartphone was launched in December 2003 as a joint venture between Motorola and Microsoft. The mobile phone's Windows Mobile for Smartphone OS allows users to access email and the Internet, use MSN Messenger, and view documents in Microsoft Office formats much like other Windows smartphones such as the Samsung SGH-i600 or HTC Tanager. The MPx200, along with the Samsung SCH-i600, were the first Windows Mobile smartphone devices to have wide distribution in the United States. Previously, smartphone platform devices could only be purchased in the United States as part of development kits sold by Microsoft. The only U.S. carrier of the phone was AT&T Wireless; however, reports also suggest a somewhat limited number of devices with Cingular branding have appeared following the purchase of AT&T Wireless by Cingular.

The O2 Xda brand was a range of Windows Mobile PDA phones, marketed by O2, developed by O2 Asia and manufactured by multiple OEMs (mainly HTC, Quanta and Arima). The first model was released in June 2002. The last models came to market in 2008. The "X" represents convergence of voice and information/data within one product; the "DA" stands for "Digital Assistant", as in PDA. The name of XDA Developers is derived from it. 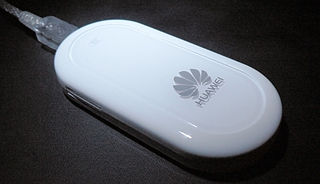 The Huawei E220 is a Huawei HSDPA access device (modem) manufactured by Huawei and notable for using the USB interface. 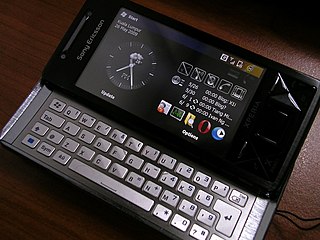 The Xperia X1 is a high-end smartphone from Sony Ericsson, and is the first in the manufacturer's Xperia series. The phone was designed and built by Taiwanese OEM HTC. The X1 was first presented at the 2008 Mobile World Congress.

The Nokia E71 is a smartphone introduced in May 2008 from the Eseries range with a QWERTY keyboard targeting business users worldwide. It runs on Symbian OS v9.2, with a Series 60 3rd Edition, second generation Feature Pack 1. The Nokia E71 succeeded the Nokia E61/61i models, building on the base design and form factor but enhancing on the feature set.

The HTC Touch Pro is a smart phone from the Touch series of Internet-enabled Windows Mobile Pocket PC smartphones designed and marketed by HTC Corporation of Taiwan. It is an enhanced version of the HTC Touch Diamond with the addition of a left-side slide-out QWERTY keyboard, a microSD card slot, and a camera flash. The Touch Pro smartphone's functions include those of a camera phone and a portable media player in addition to text messaging and multimedia messaging. It also offers Internet services including e-mail, instant messaging, web browsing, and local Wi-Fi connectivity. Depending on its market, it is a quad-band GSM or quad-band UMTS phone with GPRS, EDGE, UMTS, HSDPA, and HSUPA or a tri-band CDMA phone with 1xEV-DO Rev A. All versions feature TouchFLO 3D — a new enhanced version of the TouchFLO interface, unique only to the latest Touch series. In March 2009, HTC announced a new version, the Touch Pro2 which has a larger screen (3.6") and a redesigned slide out QWERTY keyboard with spaces between the keys.

The 3 Skypephone series was a range of 3G mobile phones made as a global project by the Three brand network. The project was initiated by the 3's global handset team, some of whom later went on to found the new mobile phone company INQ. The phones were sold in Australia, Austria, Denmark, Italy, Ireland, Sweden, the United Kingdom, Hong Kong and Macau, but the service has now been discontinued. 3 offered 4000 free Skype outbound voice minutes with the phones. Initially, the quota expired after 90 days unless the user purchased another topup or was on a pay monthly plan. This restriction was lifted by the network in 2009, where calls could still be made and received without the need to "top up" with credit. The service was advertised as "unlimited" in the UK; however, it is subject to fair use limitations, as in other countries.

The INQ1 is the first product of the Hutchinson Whampoa subsidiary, INQ. The INQ1 was released in December 2008 as a social-networking phone. Retailing at a cheaper price than competitors such as the iPhone, Blackberry Storm, G1 and Nokia 5800, it also contains slightly fewer features than other 3G 'smartphones'. It is thus marketed as an entry-level phone for users wanting to access websites and web-base applications from their mobile. The phone was created for the 3 phone network.

Sony Ericsson Aino is a touch screen based slider mobile phone. It has a multimedia PlayStation 3-inspired touch menu, a large 3-inch (76 mm) touchscreen, VGA@30 FPS video recording. The 3-inch (76 mm) screen is touch-enabled but only in the multimedia part of the menu and the camera interface. Some third party applications like Opera-Mini also support the touch screen interface. It also has an 8.1-megapixel camera. The Aino uses NetFront 3.5 web browser for internet connectivity.

The Samsung Omnia II GT-I8000(H/L/U) is a multimedia smartphone announced at Samsung Mobile Unpacked on June 15, 2009. Earlier Omnia II releases run Windows Mobile 6.1, however they are upgradable to version 6.5 Professional. There is also an unofficial and experimental Android version available. Verizon is the official US carrier for this phone and released it in December 2009. 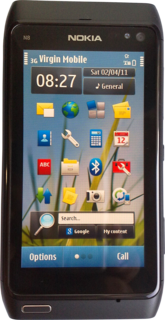 The Nokia N8 is a touchscreen-based smartphone developed by Nokia. Announced on 27 April 2010, the Nokia N8 was the first device to run on the Symbian^3 mobile operating system and it was the company's flagship device for the year. It was released on 30 September 2010 at the Nokia Online Store before being released in markets around the world on 1 October 2010.

The Nokia E7-00, also known as Nokia E7, is a business-oriented QWERTY smartphone by Nokia from the Nokia Eseries. It was announced at Nokia World in September 2010 together with the Nokia C6-01 and Nokia C7 and started shipping in February 2011. It is the second phone after the Nokia N8 to be running the Symbian^3 operating system. 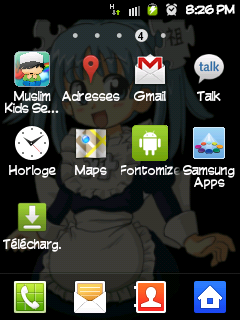 The Samsung Galaxy Mini (GT-S5570[B/L/i]) is a smartphone manufactured by Samsung that runs the Android operating system. It was announced and released by Samsung in early 2011. In some markets it is known as Samsung Galaxy Next/Pop/NG It is currently available in four different colors; steel grey, white, lime and orange. The same device is sold in the United States as the Samsung Dart exclusively for T-Mobile. The face buttons were changed to capacitive matching the rest of the Galaxy lineup.

The E5 is a mobile Wi-Fi device produced by Huawei Technologies, and is part of the company's mobile Wi-Fi series that includes the E5830s, E585, E583c and E586. The E5 series connect to other devices using a wireless interface. The devices are pocket size and allow users to access the Internet through any Wi-Fi device, mobile phone, game console, digital camera, notebook and personal digital assistant (PDA).

The Micromax Ninja A89 is a dual SIM Android smartphone launched & marketed by Micromax Mobile. It was launched in February 2013 in India. The phone is now discontinued.