Abu Samah Mohd Kassim was one of central committee member of the Malayan Communist Party during 1975. He was one of the important Malay communist member in the 1970s 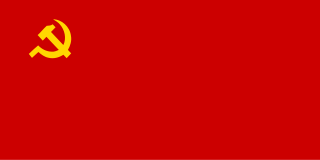 The Malayan Communist Party (MCP), officially known as the Communist Party of Malaya (CPM), was a political party in the Federation of Malaya and Malaysia. It was founded in 1930 and laid down its arms in 1989. It is most known for its role in the Malayan Emergency. It also contributed to the independence of Malaya, in which this subject is still a taboo and is systematically erased and hidden from the public due to political interests of the dominating parties within Malaysia.

Abu Samah was born in the district of Semantan, Temerloh, Pahang. Dato' Bahaman, a well-known Malay leader whom headed the rebellion against British intervention in politics and the administration of Pahang in 1891-1892, is his great-granduncle.

Temerloh is a municipality in Central Pahang, Malaysia. Temerloh has been proved that it is "The Centre Of Peninsular Malaysia" T3S which actually situated at Kampung Paya Siput, Lanchang.[4] Located about 130 kilometres (81 mi) from Kuala Lumpur along the Kuantan–Kuala Lumpur trunk road , Temerloh is the second largest town in Pahang after Kuantan, the state capital. It is situated at the junction of the Pahang River and the Semantan River. Today, "Temerloh" usually refers to the territory under the administration of Temerloh Municipal Council which includes Mentakab, Lanchang, Kuala Krau and Kerdau.

Pahang, officially Pahang Darul Makmur with the Arabic honorific Darul Makmur is a sultanate and a federal state of Malaysia. It is the third largest Malaysian state by area and ninth largest by population. The state occupies the basin of the Pahang River, and a stretch of the east coast as far south as Endau. Geographically located in the East Coast region of the Peninsular Malaysia, the state shares borders with the Malaysian states of Kelantan and Terengganu to the north, Perak, Selangor and Negeri Sembilan to the west, Johor to the south, while South China Sea is to the east. The Titiwangsa mountain range that forms a natural divider between the Peninsula's east and west coasts is spread along the north and south of the state, peaking at Mount Tahan, which is 2,187m high. Although two thirds of the state is covered by dense rain forest, its central plains are intersected by numerous rivers, and along the coast there is a 32-kilometre wide expanse of alluvial soil that includes the deltas and estuarine plains of the Kuantan, Pahang, Rompin, Endau, and Mersing rivers.

Abdul Rahman bin Tuanku Imam Nuh or also known as Dato' Bahaman was a famous Malay warrior in Pahang, Malaysia during the period of British protectorate. His friend was the famous Silat warrior Tok Gajah the father of Mat Kilau. Dato' Bahaman was an Orang Besar Raja in Pahang. He is the great-granduncle of Abu Samah Mohd Kassim, whom was also a famous fighter later became a central committee member of the Malayan Communist Party and nationalist in the Malayan National Liberation Army.

During 1946, he joined the nationalist movement and became a member of the Parti Kebangsaan Melayu Malaya and Angkatan Pemuda Insaf. In 1948, he joined the armed struggle for independence through 10th Regiment, the Malayan National Liberation Army. Under the order of Malayan Communist Party, in 1953, he moved from the forest in Pahang to the south of Thailand until 1989, along with the 10th Regiment. From 1969 to 1976, he led the group of troops, around 40 people, to Hulu Kelantan. He had fought with the Malaysian military during Operasi Gonzales.

At the age of 80, he settled in Sukhirin District, Narathiwat Province, southern Thailand. Southern Thailand, with Abdullah CD and the former members of the 10th Regiment, who chose not to return to Malaysia.

Sukhirin is a district (amphoe) in the southern part of Narathiwat Province, southern Thailand.

Narathiwat is one of the southern provinces (changwat) of Thailand. Neighboring provinces are Yala and Pattani. To the south it borders the Malaysian state of Kelantan and Perak. The southern railway line ends in this province, which is one of the nation's four provinces that border Malaysia. The province features a range of cultures as well as natural resources, and is relatively fertile. Narathiwat is about 1,140 kilometers south of Bangkok and has an area of 4,475 square kilometers. Seventy-five percent of the area is jungle and mountains and has a tropical climate.

Chin Peng, former OBE, born Ong Boon Hua was a Malayan communist politician who was a long-time leader of the Malayan Communist Party (MCP). A determined anti-colonialist, he led the party's guerrilla insurgency in the Malayan Emergency, fighting against British and Commonwealth forces in an attempt to establish an independent communist state. After the MCP's defeat and subsequent Malayan independence, Chin waged a second campaign against Malaya and, after 1963, the new state of Malaysia in an attempt to replace its government with a communist one from exile, until signing the Peace Agreement of Hat Yai 1989 with the Malaysian government in 1989.

The Royal Ranger Regiment is an infantry regiment of the Malaysian Army. Although it is second in seniority to the Royal Malay Regiment, the RRD can trace its origins back to the mid 19th century and the establishment of The Sarawak Rangers, the peacekeeping force in the Sarawak region. This force was absorbed by the Sarawak Constabulary in 1932, but the name was revived in 1941 as a British Colonial unit; this unit commanded by British Lieutenant Colonel C.M. Lane was captured by the Japanese in 1942.

This article lists important figures and events in Malayan public affairs during the year 1948, together with births and deaths of significant Malayans. Malaya left the British colonial Malayan Union; the Federation of Malaya took place on 1 February.

The Malayan National Liberation Army (MNLA), often mistranslated as the Malayan Races Liberation Army or MRLA, was a guerrilla army based in the Malayan peninsula and Singapore. It originally fought the Japanese during the second world war as the Malayan People's Anti-Japanese Army (MPAJA), from 1948-1960 it fought British and Commonwealth forces for an independent Malaya. In 1968 the MNLA resurged operating from Southern Thailand it fought against the Malaysian government in various areas of the Malayan jungle mainly in the North. In 1989 the Malayan Communist Party signed a peace treaty with the Malaysian state and the MNLA and the Party settled in villages in southern Thailand.

Rashid Maidin, sometimes given as Rashid Mahideen, was a senior leader of the Communist Party of Malaya (CPM). 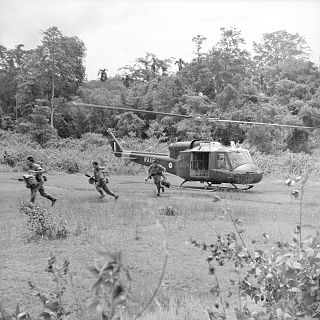 The Communist insurgency in Malaysia, also known as the Second Malayan Emergency, (Malay: Perang Insurgensi Melawan Pengganas Komunis or Perang Insurgensi Komunis and Darurat Kedua) was an armed conflict which occurred in Malaysia from 1968 to 1989, involving the Malayan Communist Party (MCP) and Malaysian federal security forces.

s The 10th Malay Regiment, established 21 May 1949, was the only predominantly Malay regiment of the Malayan National Liberation Army (MNLA). Other regiments of this armed wing of the Malayan Communist Party were predominantly Chinese. The regiment fought against the British occupation of Malaysia after World War II.

Shamsiah Fakeh was a Malaysian nationalist and feminist. She was the leader of Angkatan Wanita Sedar (AWAS), Malaysia's first nationalist women organisation and a prominent Malay leader of the Communist Party of Malaya (CPM).

Abdullah CD is a Malaysian former politician who served as Chairman and General Secretary of the Communist Party of Malaya (CPM).

The General Operations Force is the light infantry arm of the Royal Malaysia Police. The General Operations Force was established in 1948 during the Malayan Emergency by the British Administration when Malaya was a colony. The police service was mobilised to the field role, primarily to engaging Communist guerrillas during the emerging Insurgency. When Malaysia was formed in 1963, this law enforcement unit was then known as the Police Field Force. The title was adopted when it dropped the previous handle widely referred to as the Jungle Squad.

Apa Khabar Orang Kampung is a 2007 Malaysian documentary by Amir Muhammad. It was produced by Da Huang Pictures. Like its predecessor The Last Communist, it was banned in its home country but screened in several international film festivals. It premiered at the Berlinale in 2006.

Counter-terrorism in Malaysia is a series of measures implemented in Malaysia to detect and prevent terrorism as well as to minimise damages from such terrorist acts should they occur. These measures involve all levels of security services including military, police, border and infrastructure security, civil defence, medical readiness and psychological preparedness. Malaysia also participates actively in international counter-terrorism efforts. Malaysia has experienced sustained terrorism threats from 1948 until 1989, particularly from the Malayan Communist Party. The Internal Security Act 1960 (repealed 2012, replaced with Security Offences Act 2012 was enacted to prevent terrorism in Malaysia.

Kamarulzaman Teh, who was imprisoned in the Federation of Malaya for 22 years, is the longest political detainee in Malaysia's history. He was the leader of Angkatan Pemuda Insaf (API) who fought the Japanese during the Japanese occupation of Malaya.

This article lists important figures and events in the public affairs of British Malaya during the year 1930, together with births and deaths of prominent Malayans.

The Malaysian Communist Party was an underground Malaysian communist party. MCP traced its roots to splinter groups amongst communist guerrillas in southern Thailand in the 1970s. The party conducted armed struggle in the Malaysian-Thai border areas between 1983 and 1987. It eventually accepted a deal for cessation of hostilities with the Thai military and its cadres were resettled in 'friendship villages'.