Hall was born in Dunedin on 9 October 1987 to Lindsay Hall, a dairy farmer, and Gayle Hall, née Paterson, an obstetric nurse. He was diagnosed with spina bifida.

Hall competed for New Zealand at the 2006 Winter Paralympics, where he placed 41st in the men's downhill event, 43rd in the men's giant slalom and 50th in the men's Super-G, standing

At the 2018 Winter Paralympics, Hall again won a gold medal in the men's slalom event, standing, and also won a bronze medal in the super combined standing. He was also named as a co-recipient of the 2018 Whang Youn Dai Achievement Award. [3] [4]

In 2022, he won the silver medal in the men's standing slalom event at the 2021 World Para Snow Sports Championships held in Lillehammer, Norway. [5] [6]

Hall was appointed a Member of the New Zealand Order of Merit in the 2011 Queen's Birthday Honours, for services to sport. [7]

The alpine skiing competition of the Vancouver 2010 Paralympics will be held at Whistler, British Columbia. The events were due to be held between 13 March, and 21 March 2010. Events scheduled for 13 March, however, were postponed due to weather conditions – specifically, low visibility.

The 1998 Winter Paralympics were held in Nagano, Japan from the 5–14 March 1998. At the Games, Australia was represented by four male alpine skiers. Australia finished equal 16th of 21 Nations on the overall medal tally. James Patterson, an LW9 standing skier, won Australia's two medals - one gold and one bronze.

Patrick Cooper is a winter Paralympian from New Zealand who competed in the Paralympic Winter Games in 1988, 1992 and 1994 in the para alpine skiing. 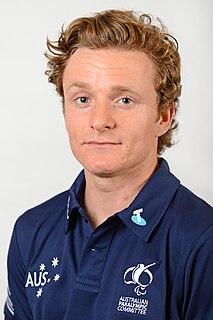 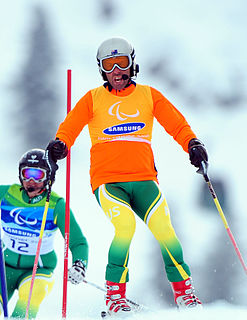 Karolina Wisniewska is a para-alpine standing skier. Born in Warsaw, she moved to Canada when she was 5 years old where she then took up skiing as a form of physical therapy for her cerebral palsy. Over the course of her skiing career, she won eight total Paralympic medals for skiing, and 18 medals at International Paralympic Committee (IPC) World Cups. At the 2002 Winter Paralympics, she earned four medals, the most ever earned by a Canadian para-alpine skier at a single Games. Wisniewska retired from the sport for a second time in May 2012 following an injury in 2011 that resulted in her missing most of the 2011/2012 skiing season.

Menna Fitzpatrick MBE is a British alpine skier. She is visually impaired having only 5% vision and formerly skied with guide Jennifer Kehoe until 2021. They competed at the 2018 Winter Paralympics in Pyeongchang in March 2018 where they took four medals, including a gold in the slalom, making Fitzpatrick Team GB's most decorated Winter Paralympian.

Brian Santos is an American skier who won nine U.S. Championships and six Paralympic gold medals. Santos won all six para-alpine skiing events in which he competed across Albertville in the 1992 Winter Paralympics and Lillehammer in the 1994 Winter Paralympics. In each event his guide was Ray Watkins. Santos and Watkins were inducted into the National Disabled Ski Hall of Fame in December 2015, making Santos the first visually-impaired racer to be given the honour and Watkins the first guide. Santos retired from competitive skiing in 1996 and later became a coach at the College of the Siskiyous

Brenna Huckaby is an American snowboarder. She competed at the 2018 Winter Paralympics, winning gold medals in the snowboard cross and banked slalom. She is the first Paralympian to appear in the Swimsuit Issue of Sports Illustrated.

Jesper Saltvik Pedersen is a para-alpine skier who won gold for Norway at the 2018 Winter Paralympics in Giant slalom. 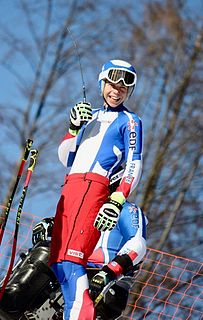 Arthur Bauchet is a French para-alpine skier who won four silver medals for France at the 2018 Winter Paralympics.