Affinity is a 1999 historical fiction novel by Sarah Waters. It is the author's second novel, following her debut Tipping the Velvet . Set during 1870's Victorian England, it tells the story of a woman, Margaret Prior, who is haunted by a shadowy past and in an attempt to cure her recent bout of illness and depression, begins visits to the women's wards of Millbank Prison. Whilst there she becomes entranced by the spiritualist Selina Dawes, with whom she becomes obsessed and begins an inappropriate relationship. Written as an epistolary novel, the story alternates as a series of diary entries written by both main characters.

Like her first novel, Affinity contains overarching lesbian themes, and was acclaimed by critics on its publication.

Margaret Prior (also called "Peggy" and "Aurora"), an unmarried woman from an upper-class family, visits the Millbank Prison in 1870s Victorian-era England. Margaret is generally unhappy, recovering from her father's death and her subsequent suicide attempt, and struggling with her lack of power living at home with her over-involved mother despite being almost 30. To counter this, she becomes a "Lady Visitor" of the prison's female wards, hoping to escape her troubles and be a guiding figure in the lives of the female prisoners. On her first visit she is entranced by the sight of a young woman with a flower, who reminds her of a Carlo Crivelli painting. She learns that this woman is Selina Dawes, who is a somewhat infamous medium of spirits jailed two years previously for the apparent death of the lady with whom she resided. After their early discussions Margaret begins to confide in Selina inappropriate details of her past, and learn more about spiritualism; before long, the relationship evolves and appears to take on a life of its own...

The novel was adapted into a screenplay by Andrew Davies. A feature film based on Davies' adaptation of Affinity premiered on 19 June 2008 at the opening night of Frameline, the San Francisco International LGBT Film Festival, at the Castro Theater. [1] [2]

The film was first shown on ITV1 in the United Kingdom on 28 December 2008. 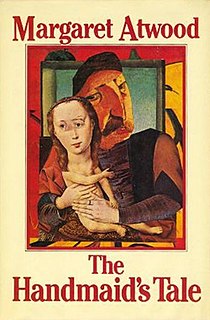 The Handmaid's Tale, originally published in 1985, is a dystopian novel written by Canadian author Margaret Atwood. It is set in a near-future New England, in a totalitarian state resembling a theonomy that overthrows the United States government. 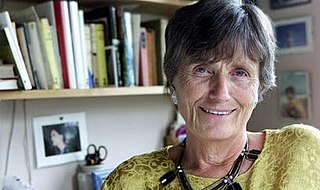 Margaret Forster was an English novelist, biographer, memoirist, historian and literary critic. She is best known for a 1965 novel, Georgy Girl, which was made into a successful film of the same name and inspired a hit song by The Seekers, and also for a 2003 novel, Diary of an Ordinary Woman, her biographies of Daphne du Maurier and Elizabeth Barrett Browning, and her memoirs, Hidden Lives and Precious Lives. 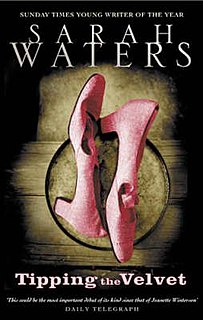 Emma Donoghue is an Irish-Canadian playwright, literary historian, novelist, and screenwriter. Her 2010 novel Room was a finalist for the Man Booker Prize and an international best-seller. Donoghue's 1995 novel Hood won the Stonewall Book Award. and Slammerkin (2000) won the Ferro-Grumley Award for Lesbian Fiction. Room was adapted into a film of the same name, for which Donoghue wrote the screenplay which was subsequently nominated for the Academy Award for Best Adapted Screenplay.

This article provides a list of fictional stories in which Spiritualism features as an important plot element. The list omits passing mentions.

The Night Watch is a dark, 2006 historical fiction novel by Sarah Waters. It was shortlisted for both the 2006 Man Booker Prize and the 2006 Orange Prize. The novel, which is told backward through third-person narrative, takes place in 1940s London during and after World War II. The storyline follows the fragmented lives and the strange interconnections between Kay, Helen and Julia, three lesbians; Viv, a straight woman; and Duncan, her brother, whose sexuality is ambiguous. The war, with its never-ending night watches, serves as a horrifying context, backdrop and metaphor as a constant reminder of the morbidity that surrounds life and love.

Mary Wings is an active American cartoonist, writer, and artist. She is known for highlighting lesbian themes in her work. In 1973, she made history by releasing Come Out Comix, the first lesbian comic book. She is also known for her series of detective novels featuring lesbian heroine Emma Victor. Divine Victim, Wings' only Gothic novel, won the Lambda Literary Award for Lesbian Mystery in 1994.

Bernardine Evaristo, MBE FRSL FRSA, FEA, is a British author of eight works of fiction. Her bestselling novel, Girl, Woman, Other, jointly won the Booker Prize in 2019, alongside Margaret Atwood's The Testaments. It was also one of Barack Obama's 19 Favourite Books of 2019. Evaristo's writing also includes short fiction, drama, poetry, essays, literary criticism, and projects for stage and radio. Two of her books, The Emperor's Babe (2001) and Hello Mum (2010), have been adapted into BBC Radio 4 dramas. She is currently Professor of Creative Writing at Brunel University London and the vice-chair of the Royal Society of Literature.

Training Rules is a 63-minute award-winning 2009 American documentary film co-produced and co-directed by Dee Mosbacher and Fawn Yacker. It is narrated by Diana Nyad.

Affinity is a 2008 UK film adaptation of Sarah Waters' 1999 novel of the same name; directed by Tim Fywell and written by Andrew Davies. It stars Zoë Tapper, Anna Madeley, Domini Blythe, Amanda Plummer, and Mary Jo Randle. The film was nominated for the GLAAD Media Award for Outstanding TV Movie or Limited Series.

Sherryl Jordan is a New Zealand writer for children and young adults, specialising in fantasy and historical fiction. She has written a number of children's and young adult works published in New Zealand and overseas. She is best known for her books The Juniper Game and The Raging Quiet. She received the Margaret Mahy Medal for her contribution to children's literature, publishing and literacy in 2001.