Aimee Romualdez Marcos (born May 2, 1979) is a Filipina musician and public figure known as the drummer of indie music band The Dorques. She is the adopted [1] daughter of the late former Philippine President Ferdinand Marcos and former first lady [2] Imelda Marcos. [3] [4] [5]

She was the only member of the immediate Marcos family to still be a minor when martial law was formally lifted in 1981 and when the Marcoses went into exile in Honolulu in 1986, [6] [7] and has stayed away from politics. [4]

She is currently living in Cagayan de Oro with her husband, Cid Bernedo, and their son. [8]

Ferdinand Emmanuel Edralin Marcos Sr. was a Filipino politician, lawyer, dictator, and kleptocrat who was the 10th president of the Philippines from 1965 to 1986. He ruled under martial law from 1972 until 1981 and kept most of his martial law powers until he was deposed in 1986, branding his rule as "constitutional authoritarianism" under his Kilusang Bagong Lipunan. One of the most controversial leaders of the 20th century, Marcos' rule was infamous for its corruption, extravagance, and brutality. 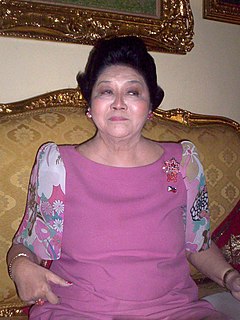 Imelda Romualdez Marcos is a Filipino politician who served as the First Lady of the Philippines from 1965 to 1986. She is the widow of former president and dictator Ferdinand Marcos and the mother of current president Ferdinand Marcos Jr.

Ferdinand "Bongbong" Romualdez Marcos Jr., commonly referred to by the initials PBBM or BBM, is a Filipino politician who is the 17th and current president of the Philippines. He previously served as a senator from 2010 to 2016. He is the second child and only son of former president and dictator Ferdinand Marcos Sr. and former first lady Imelda Romualdez Marcos.

Maria Imelda Josefa Remedios "Imee" Romualdez Marcos is a Filipina politician and former actress serving as a Senator since 2019. She is the daughter of Ferdinand Marcos and former first lady Imelda Marcos and the older sister of the current president, Bongbong Marcos. She previously served as governor of Ilocos Norte from 2010 to 2019 and as representative of Ilocos Norte's 2nd district from 1998 to 2007.

The Presidential Commission on Good Government (PCGG) is a quasi-judicial government agency of the Philippines whose primary mandate is to recover the ill-gotten wealth accumulated by Ferdinand Marcos, his immediate family, relatives, subordinates and close associates, whether located in the Philippines or abroad. It was created by President Corazon Aquino shortly after she was sworn in as president in the aftermath of the 1986 People Power revolution. In addition to recovering the Marcos wealth, it is also tasked with investigating other cases of graft and corruption; and instituting of corruption prevention measures.

The Solid North refers to the regional voting bloc of the northern provinces of the Philippines for politicians of Ilocano descent, more particularly the Marcos family and their allies, and also economic issues affecting the Ilocanos in general such as the tobacco industry. Often included in Solid North are the provinces in the Ilocos Region, Cordillera Administrative Region (CAR), and Cagayan Valley.

Isang Bansa, Isang Diwa was the national motto of the Philippines from 1978 to 1986, during the presidency of President Ferdinand Marcos. It was adopted on June 9, 1978 by virtue of Presidential Decree No. 1413. The motto has been criticized and has been denounced as "the slogan of a fascist regime".

The burial of Ferdinand Marcos, a former Philippine President who ruled as a dictator for 14 years, took place on November 18, 2016, at the Libingan ng mga Bayani in Fort Bonifacio, Metro Manila, Philippines. Marcos had been elected the 10th President of the Philippines in 1965, but declared Martial Law in 1972 before his final constitutionally allowed term was over, holding on to power until his overthrow by the People Power Revolution in 1986. 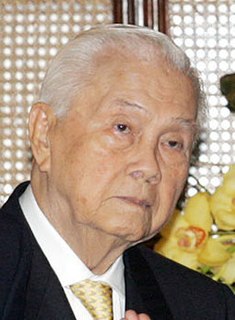 Antonio Floirendo, Sr. was a Filipino entrepreneur and landowner whose main business was his 6000-hectare banana plantation in Panabo, Davao del Norte, Philippines, earning him the his title as the "banana king" during the dictatorship of Ferdinand Marcos. He was among a group of close associates of Philippine President Ferdinand Marcos referred to in media as "Marcos cronies", having benefitted from his close association with Marcos. The Marcos mansion at 2442 Makiki Heights Drive in Honolulu, Hawaii, in which Marcos spent the last years of his life in exile, was registered under the name of Floirendo Sr.

The term "Marcos mansions" refers to at least 50 upscale residences in the Philippines of the family of President Ferdinand Marcos. These are aside from the various overseas landholdings of the Marcos family, which are spread around the world. The Supreme Court of the Philippines considers these landholdings as part of the "ill-gotten wealth" of the Marcos family, based on the definitions set forth in Republic Act No. 1379, which had been passed in 1955.

Certain associates of former Philippine President Ferdinand Marcos, historically referred to as the Cronies of Ferdinand Marcos or using the catchphrase "Marcos cronies", have benefited from their friendship with Marcos – whether in terms of legal assistance, political favors, or facilitation of business monopolies, during his administration. Marcos critics, and the local and international press began referring to these individuals as "cronies" during the latter days of the Marcos dictatorship, and the Philippine government – especially the Presidential Commission on Good Government (PCGG) – continued using the term after the ouster of Marcos in 1986.

The Philippine Constitutional Convention of 1971 was called to change the 1935 Constitution of the Philippines. The delegates were elected on November 10, 1970, and the convention itself was convened on June 1, 1971. It was marked by controversies, including efforts to uphold term limits for incumbent President Ferdinand Marcos, and a bribery scandal in which 14 people, including First Lady Imelda Marcos, were accused of bribing delegates to favor the Marcoses. 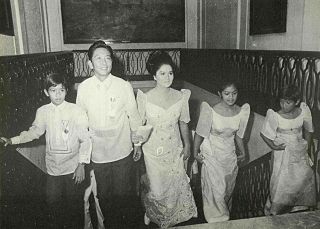 The Marcos family is a political family in the Philippines. They have established themselves in the country's politics, having established a political dynasty that traces its beginnings to the 1925 election of Mariano Marcos to the Philippine House of Representatives as congressman for the second district of Ilocos Norte; reached its peak during the 21-year rule of Ferdinand Marcos as president of the Philippines that included his 14-year dictatorship beginning with the declaration of Martial Law throughout the country; and continues today with the political careers of Imelda Marcos, Imee Marcos, Sandro Marcos and reached its peak again with the presidency of Ferdinand Marcos Jr. 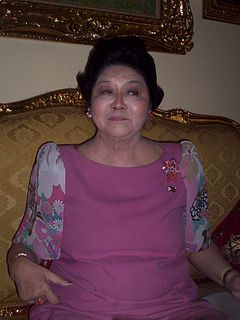 The Marcos jewels generally refers to the jewelry collection of the Marcos family – most famously that of former First Lady Imelda Marcos. However, it also specifically refers to three collections of jewelry which were recovered by the Presidential Commission on Good Government (PCGG) in 1986, which the Philippine Supreme Court had ruled to be part of the Marcoses' unlawful wealth. 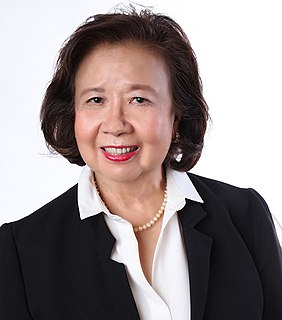 Carmen Navarro Pedrosa was a Filipino journalist best known for a series of biographical books on the life of former Philippine First Lady Imelda Marcos, and for her role in the overseas resistance against the Marcos dictatorship after she went into exile in London during the Marcos administration.

The Kingmaker is a 2019 documentary film written and directed by Lauren Greenfield, featuring the political career of Imelda Marcos with a focus on the Marcos family's efforts to rehabilitate the family's image and to return to political power, including her plans to see her son, Bongbong, become President of the Philippines, and the alliance that Bongbong and Imee Marcos established with Rodrigo Duterte in his bid to win the 2016 Philippine presidential election. 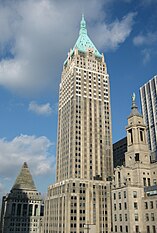 The overseas landholdings of the Marcos family, which the Philippine government and the United Nations System's Stolen Asset Recovery Initiative consider part of the $5 billion to $13 billion "ill-gotten wealth" of Ferdinand and Imelda Marcos, are said to be distributed worldwide in places including California, Washington, New York, Rome, Vienna, Australia, Antilles, the Netherlands, Hong Kong, Switzerland and Singapore. These are aside from the fifty-or-so Marcos mansions acquired by the Marcos family within the Philippines itself.

The Marcos family, a political family in the Philippines, owns various assets that Philippine courts have determined to have been acquired through ilicit means during the presidency of Ferdinand Marcos from 1965–1986. These assets are referred to using several terms, including "ill-gotten wealth" and "unexplained wealth," while some authors such as Philippine Senator Jovito Salonga and Belinda Aquino more bluntly refer to it as the "Marcos Plunder."

Historical distortion regarding Ferdinand Marcos is a phenomenon in the politics of the Philippines. Ferdinand Marcos was the country's president between 1965 and 1986. Distortion, falsification, or whitewashing of the historical record regarding this period, sometimes referred to using the phrases "historical denialism", "historical negationism", or "historical revisionism" as an eupheminism for negationism, is an academically documented phenomenon linked to the return of Marcos' immediate family and political allies to government positions, as well as the hero's burial of Marcos himself in 2016. It continues Marcos' own efforts to create a cult of personality for himself, which in itself involved various forms of historical distortion.

Rose Beatrix Laviña Cruz-Angeles is a Filipino lawyer and vlogger who is the current Press Secretary of the Philippines since June 30, 2022.