Clackmannan, is a small town and civil parish set in the Central Lowlands of Scotland. Situated within the Forth Valley, Clackmannan is 1.8 miles (2.9 km) south-east of Alloa and 3.2 miles (5.1 km) south of Tillicoultry. The town is within the county of Clackmannanshire, of which it was formerly the county town, until Alloa overtook it in size and importance. According to a 2009 estimate the population of the settlement of Clackmannan is 3,348 residents. 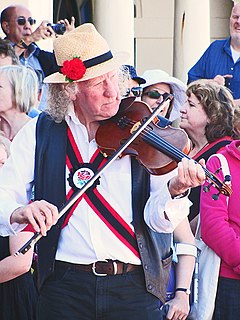 Fraser operates Culburnie Records and is a leading artist on the label. He has founded five summer fiddling programs: the Valley of the Moon [1] fiddle camp in California (begun in 1984), Alasdair Fraser Skye Week - a week-long course on the Isle of Skye (begun in 1987), Sierra Fiddle Camp [2] in California (begun in 2006), [3] Crisol de Cuerda, a Trad strings program in Spain begun in 2008 and Stringmania! - a trad strings program in Australia in 2016. Adept in various Scottish idioms, in recent years, with cellist Natalie Haas, he has helped reconstruct and revive the Scottish tradition of playing traditional music on violin and cello ("wee fiddle" and "big fiddle"). [4] [5] Fraser lives in northern California with his wife and two sons. [6]

The violin, sometimes known as a fiddle, is a wooden string instrument in the violin family. Most violins have a hollow wooden body. It is the smallest and highest-pitched instrument in the family in regular use. Smaller violin-type instruments exist, including the violino piccolo and the kit violin, but these are virtually unused. The violin typically has four strings, usually tuned in perfect fifths with notes G3, D4, A4, E5, and is most commonly played by drawing a bow across its strings, though it can also be played by plucking the strings with the fingers (pizzicato) and by striking the strings with the wooden side of the bow.

In December 2011, Fraser was inducted into the Scottish Traditional Music Hall of Fame. [7]

Jody Stecher is an American singer and musician, who plays bluegrass and old-time music on banjo, mandolin, fiddle and guitar, and Dagar-vani dhrupad on the sursringar, a rare Indian instrument that is a baritone relative of the sarod.

Skyedance is a Celtic fusion group, founded by fiddler Alasdair Fraser in 1996.

Narada is a record label formed in 1983 as an independent New-age music label and distributed by MCA. A fully owned subsidiary of Universal Music Group and distributed by Capitol Music Group's Blue Note Records, the label evolved through an expansion of formats to include world music, jazz, Celtic music, new flamenco, acoustic guitar, and piano genre releases.

Treasure Planet is a 2002 American animated science fiction action adventure film produced by Walt Disney Feature Animation and released by Walt Disney Pictures on November 27, 2002. It is the 43rd Disney animated feature film. The film is a science fiction adaptation of Robert Louis Stevenson's adventure novel Treasure Island and was the first film to be released simultaneously in regular and IMAX theaters. It is also an animated remake of the 1987 Italian mini-series Treasure Island in Outer Space. It employs a novel technique of hand-drawn 2D traditional animation set atop 3D computer animation.

Natalie MacMaster is a Canadian fiddler from the rural community of Troy in Inverness County, Nova Scotia, who plays Cape Breton fiddle music.

Rushad Robert Eggleston is an American composer, wild jazz vocalist, kazoo player & performer, who has toured extensively in 49 states and 15+ countries. Eggleston is known for inventing words, and for his imaginative world called The Land of Sneth.

William Coulter is an American Celtic guitarist, performer, recording artist, and teacher. Since 1981 he has explored the world of traditional music as a soloist with ensembles including Isle of Skye, Orison, and the Coulter-Phillips Ensemble. 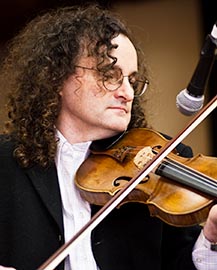 The Scots Trad Music Awards celebrate Scotland's traditional music in all its forms and create a high profile opportunity to bring the music and music industry into the spotlight of media and public attention.

Colyn C. Fischer is an American violinist that has played the violin since the age of three and has been Scottish fiddling since the age of five. As a teenager, he studied with a number of the great fiddlers of Scotland, such as Ian Powrie and Alasdair Hardy, and of the United States, including John Turner and Bonnie Rideout. He holds a Bachelor of Music Performance in Violin from Wheaton College, Illinois, and has recorded with various ensembles in genres including jazz, classical, rock and Scottish.

Laura Risk is a California-born violinist. She specializes in performing and teaching the diverse fiddle repertoire of Scotland and Quebec.

Hugh Alexander “Sandy” MacIntyre is one of the most respected artists in the tradition of Cape Breton fiddle music.

American fiddle-playing began with the early settlers who found that the small viol family instruments were portable and rugged. According to Ron Yule, "John Utie, a 1620 immigrant, settled in the North and is credited as being the first known fiddler on American soil". Early influences were Irish fiddle styles as well as Scottish and the more refined traditions of classical violin playing. Popular tunes included "Soldier's Joy", for which Robert Burns had written lyrics, and other such tunes as "Flowers of Edinburgh" and "Tamlin," which were claimed by both Scottish and Irish lineages.

Canadian fiddle is the aggregate body of tunes, styles and musicians engaging the traditional folk music of Canada on the fiddle. It is an integral extension of the Anglo-Celtic and Québécois Frenchfolk music tradition but has distinct features found only in the Western hemisphere.

Métis fiddle is the style which the Métis of Canada and Métis in the northern United States have developed to play the violin, solo and in folk ensembles. It is marked by the percussive use of the bow and percussive accompaniment. The Meti people blend First Nations, French, English, Celtic and other ancestry. Fiddles were "introduced in this area by Scottish and French-Canadian fur traders in the early 1800s".

William Hugh "Bill" Lamey (1914–1991) was a renowned and influential Cape Breton fiddler. He was a pioneer in recorded performances of the music. As an avid collector of rare tunes, he amassed one of the most comprehensive and valuable collections of written Scottish violin music.

Muriel Johnstone is a Scottish pianist and composer. She was raised and schooled in Ardrossan, Ayrshire, Scotland.