The Alliance for Audited Media (AAM) is a North American non-profit industry organization founded in 1914 by the Association of National Advertisers to help ensure media transparency and trust among advertisers and media companies. Originally known as the Audit Bureau of Circulations (ABC), today AAM is a source of verified media information and technology platform certifications, providing standards, audit services and data for the advertising and publishing industries. It is one of more than three dozen such organizations operating worldwide, affiliated with the International Federation of Audit Bureaux of Circulations (IFABC).

At the turn of the 20th century, the Association of National Advertisers (ANA) observed a market need for verifiable, authenticated circulation figures from print publishers. As a result, in 1914, advertisers, ad agencies and publishers in the U.S. and Canada united to form the first Audit Bureau of Circulations to bring trust and accountability to the print media market.

Nearly a century later, the need for trust and accountability remains unchanged, although the format in which media is delivered has evolved significantly. With the expansion of digital media platforms, media buyers seek a solution to a chaotic marketplace and increasingly desire credible cross-channel metrics. On November 15, 2012, ABC in North America rebranded its organization as the Alliance for Audited Media to reflect the new media environment and its members' evolving business models. [1]

AAM is governed by a tripartite board of directors composed of leaders in publishing, marketing and advertising from the U.S. and Canada. Together with an extensive network of committees, the AAM board sets the standards by which print and digital media are measured and reported. AAM audited data is relied upon by marketers and ad agencies to plan for and buy media. This information is housed in an AAM database, disseminated via several complementary industry data providers (such as Gfk MRI and Kantar Media SRDS) and fed directly to proprietary databases of many large ad agencies and client-side marketers.

The organization is headquartered in Lisle, Illinois with an additional office in Toronto.

Membership is open to all publishers, digital media companies, advertisers and advertising agencies. Additionally, any individual, firm or corporation that requires access to media data may apply for an associate membership. AAM serves as an industry forum, connecting advertisers, ad agencies and publishers to discuss issues and trends and set standards.

An online advertising network or ad network is a company that connects advertisers to websites that want to host advertisements. The key function of an ad network is an aggregation of ad supply from publishers and matching it with advertiser's demand. The phrase "ad network" by itself is media-neutral in the sense that there can be a "Television Ad Network" or a "Print Ad Network", but is increasingly used to mean "online ad network" as the effect of aggregation of publisher ad space and sale to advertisers is most commonly seen in the online space. The fundamental difference between traditional media ad networks and online ad networks is that online ad networks use a central ad server to deliver advertisements to consumers, which enables targeting, tracking and reporting of impressions in ways not possible with analog media alternatives. 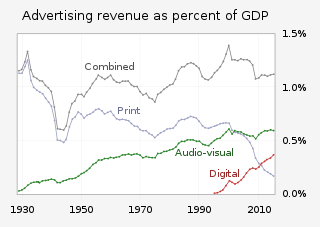 The International Federation of Audit Bureaux of Circulations (IFABC) is an organisation founded in 1963 in Stockholm, Sweden

The Association of National Advertisers (ANA) represents the marketing community in the United States. Its headquarters is in New York City and it has another office in Washington, D.C. ANA's membership includes over 600 companies with 25,000 brands that collectively spend over 400 billion dollars in marketing communications and advertising.

BBB National Programs, an independent non-profit organization, oversees more than a dozen national industry self-regulation programs that provide third-party accountability and dispute resolution services to companies, outside and in-house counsel, consumers, and others in arenas such as privacy, advertising, data collection, child-directed marketing, and more.

The Interactive Advertising Bureau (IAB) is an advertising business organization that develops industry standards, conducts research, and provides legal support for the online advertising industry. The organization represents many of the most prominent media outlets globally, but mostly in the United States, Canada and Europe.

The World Federation of Advertisers (WFA) is a global association for multinational marketers and national advertiser associations. Its membership is made up of over 120 of the world's top brands and national associations in more than 60 markets. WFA's aim is to champion effective and sustainable marketing communications worldwide.

The Audit Bureau of Circulations (ABC) of India is a non-profit circulation-auditing organisation. It certifies and audits the circulations of major publications, including newspapers and magazines in India.

Verified Audit Circulation is a United States company founded by Geraldine Knight in 1951 that conducts circulation audits of both free and paid print publications and of traffic figures for web sites. The company also provides custom research and verifies field delivery of products such as yellow pages, branded delivery bags, and door hangers.

24/7 Media, formerly 24/7 Real Media is a technology company headquartered in New York City and 20 offices in 12 countries, specializing in Digital Marketing. It provides new type of digital technology marketing solutions for publishers, advertisers and agencies globally. It was formerly listed as "TFSM" on the NASDAQ stock exchange. The company was purchased by WPP plc in 2007 for $649 million. David J. Moore is the chairman, founder and CEO. He also served as chairman of the Interactive Advertising Bureau. In December, 2013, 24/7 Media announced it would merge with GroupM subsidiary, Xaxis.

The Coalition for Innovative Media Measurement (CIMM) is a trade group founded in 2009 by television content providers, media agencies and advertisers to explore ways to measure audiences across media in the United States.

TubeMogul is an enterprise software company for brand advertising.

The Digital Advertising Alliance of Canada (DAAC) is a Canadian non-profit trade association.

The Media Rating Council (MRC) is a United States-based nonprofit organization that manages accreditation for media research and rating purposes.